Fleetingly, it looked like Theo Walcott’s first goal since rejoining Southampton would yield a precious win. Instead it spurred Wolves, who struck back thanks to Pedro Neto and came close to claiming a victory that had looked unlikely for most of the match. By the end, Southampton were grateful to cling on for a draw and extend their unbeaten streak to seven matches.

“I’m very proud of my team because taking something was definitely not easy,” said Ralph Hasenhüttl. “You could see towards the end that [Wolves] had another gear to go. Seven games unbeaten is massive for us, unbelievable.”

Before breaking the stalemate at Molineux, Walcott’s last goal for Southampton had been in 2006, when the club was in the Championship and he was a teenage dreamer. Although he has now scored in the top flight for 14 seasons in a row, he may reflect on the fact that he should have netted twice in this match, squandering an excellent chance to increase his team’s lead just before Neto cancelled it out by tapping into the net after a shot by Raùl Jiménez rebounded off a post.

Wolves were the Premier League comeback kings last season, gaining more points after falling behind than anyone else. But this was the first time this season that they had salvaged something from a match in which they conceded first, the three previous ending in defeats.

The biggest novelty as far as they were concerned, however, was their formation, with Nuno Espírito Santo electing to start with a four-man defence for the first time.

The switch was partly enforced by the absence of Conor Coady. The captain had been hoping to make his 122nd consecutive league appearance and edge closer to the club record of 127 held by Phil Parkes but, having been unable to train in the build-up after being obliged to withdraw from England’s squad 11 days ago for coming into contact with somebody who had tested positive for Covid-19, Coady had to watch from the stands. Romain Saïss was in quarantine at home, having tested positive while on international duty with Morocco. 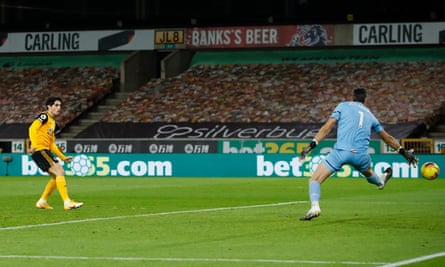 The visitors made the smoother start as Wolves’ rearguard looked a trifle shaky in their new formation. But Wolves soon showed their threat at the other end, with Oriol Romeu resorting to a foul to stop Daniel Podence. After João Moutinho blasted the free-kick into the wall, Alex McCarthy made fines saves to turn away ferocious shots on the rebound by Nélson Semedo and Leander Dendoncker.

But Southampton controlled most of the first half, moving with verve and stealth. Walcott had a chance in the 15th minute after nifty work by Stuart Armstrong but did not catch his shot crisply, allowing Rui Patrício to save.

There was a sharp authority to Southampton’s play as they forced Wolves’ backwards. They produced a snazzy move in the 26th minute, pinging passes around before Stuart Armstrong poked the ball just wide from the edge of the area. Wolves attacked with zeal when they could, and McCarthy had to react smartly to flip a header by Podence over the bar in the 35th minute.

With Southampton solid, Adama Traoré, back in the starting lineup after matches as a substitute, made little impact in the first period, and Jiménez even less.

Second-half surges tend to be a Wolverhampton speciality. True to form, they improved after the break. McCarthy beat away a powerful shot by Podence in the 52nd minute. Then Jiménez should have tested the goalkeeper again but glanced a header way wide from eight yards.

Then Southampton edited the script, seizing the lead by profiting from disjointed Wolves defending. Armstrong outmuscled Rayan Aï-Nouri on the right and fed Moussa Djenepo, who clipped a pass to Che Adams at the right-hand side of the six-yard box. The forward sidefooted the ball across the face of goal and, with Semedo dozing, Walcott accepted the invitation to score from close range.

Walcott should have increased the deficit in the 65th minute but shot wide after being sent clear by Adams. The cost of that miss increased when Jiménez struck a beautiful shot from the edge of the area against the post, and Neto, who had been sprung from the bench moments earlier, followed in to equalise.

Miranchuk will make his debut for Atalanta in the Serie A match against Udinese. He came on as a substitute 9 times
Rummenigge on the Euro: UEFA President thinks it would be wiser to host the tournament in one country
Nacho will not play with Alcoyano. Real Madrid defender has been in contact with a coronavirus infection
Cuadrado has recovered from covid and can play with Napoli
Inter have offered to rent Origi from Liverpool
Messi, Ronaldo, Neymar, Lewandowski and Ramos-in the symbolic team of the year from the UEFA website
Berbatov on Bale: He will be returned to Real Madrid if he does not start to show the level that Mourinho expects
Source https://www.theguardian.com/football/2020/nov/23/wolves-southampton-premier-league-match-report

Joe Biden inauguration: Where is Donald Trump today? Has he left the White House?

Scots asked for thoughts on re-introducing big cats to Scotland

Apple TV+ subscribers are getting another bonus extension

Emergency Cobra meeting to be held in response to Storm Christoph