Organisers of the Amble Festival of Light were forced to call off their planned event at the Little Shore, after torrential rain and high winds brought waves crashing over the breakwater, bringing public safety into question.

• We will try again say organisers

The unique event featuring original music, lights, kayaks and a magnificent floating phoenix was due to take place on 21 November, but while setting up the lights and sound installations, the bad weather set in. 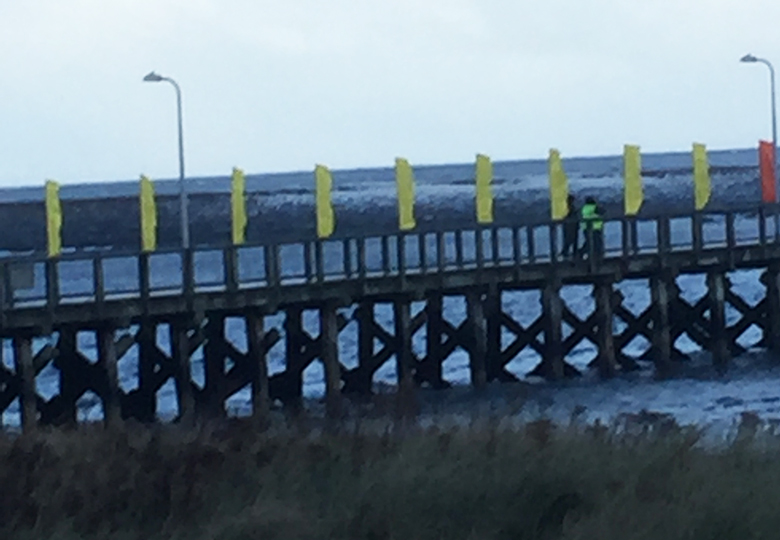 Over 300 banners and flags were due to be placed all around the Little Shore and pier area, but bad weather meant the event had to be cancelled. Photo by Andrew Gooding

A spokesperson for Amble Events Committee said “It was such a shame we had to call it a day, but the weather was atrocious when we were setting up, and meant not only was some of the equipment at risk, but the waves could have endangered the public. So many individuals and community groups volunteered their time for this event, and so many people were looking forward to it. It would have been a magical evening and I hope we can reschedule.”

Fortunately Santa managed to drop in to the Fish Shack and meet some of Amble’s youngsters.

EDITOR’S NOTE: The article in the print version of The Ambler quotes the spokesperson as hoping the event could be rescheduled in early December. Since the paper went to print, it has been decided to reschedule to next year.

Related article: Why was there no parade this year?

Who are the Fraggle Rock characters and who are the guest celebrities in Apple TV+ reboot?

How much money can you withdraw from an ATM? Maximum for UK banks