Sam Allardyce had said upon joining West Brom that a first relegation from the Premier League in his managerial career would “kill” him and, while the defeat that sealed their fate had a blessedly more benign effect, the distaste was etched on his face at full time. In truth this moment had long been coming and the Baggies will yo-yo again; they might have fancied prolonging their interest in the season against a smarting Arsenal but, despite starting and finishing strongly, could not capitalise on the hosts’ gloom.

Instead Emile Smith Rowe, fed superbly by Bukayo Saka, and Nicolas Pépé scored fine goals either side of the half-hour to give Mikel Arteta a little respite after the dismay of Thursday’s chastening Europa League exit against Villarreal. Matheus Pereira applied a classy finish to raise West Brom’s hope of clawing the point that would have kept them mathematically alive, but Willian produced a picturebook free-kick at the end to render their efforts meaningless.

Without Saka and Smith Rowe, Arsenal’s season would be virtually bereft of redeeming factors. The point was hammered, or more accurately volleyed, home after half an hour in which a keen West Brom had come closer to scoring. Saka had started at left-back in a heavily-rotated side and, characteristically, had still been the home side’s best player in those opening exchanges. The latest in a series of underlapping runs towards the line saw him collect a pass from Willian, drive into vacant space and cut back at waist height. Smith Rowe, meeting Saka’s delivery on the run, applied a sweet finish and some of the gloom that has clouded these parts since Thursday night could temporarily lift.

When the going is good, Arsenal create a presentable impression. Pépé’s goal followed within five minutes and it was a peach, although Allardyce will wonder why such a one-footed player was ushered on to the side from which he can be devastating. Using Calum Chambers’ run as a decoy, he cut in from the right and slammed a vicious 18-yard strike across Sam Johnstone, the ball finishing in the top corner via a flailing fingertip. It was the forward’s fourth goal in nine games and yet another demonstration of his obvious talent, but until he starts standing tall on the occasions that really matter, nothing he does will quite seem enough.

Perhaps West Brom could sympathise. Allardyce had set them up aggressively and they were eager to ask questions from the start, forcing Arsenal’s centre-backs into some old-fashioned defending with a string of crosses and long throws. Callum Robinson forced Rob Holding into a block and then, seizing on a sloppy touch from Saka, blasted millimetres past the angle of Bernd Leno’s right post with the keeper beaten. Some of the travelling contingent were on their feet until realisation dawned; Robinson hit the bar shortly afterwards, although VAR would have found him to be offside, and Matheus Pereira worried Leno with another shot from range.

They had begun to lose their way in the moments before Smith Rowe’s goal, though, and Allardyce was chewing gum and glowering by the time Pépé effectively sealed his team’s fate. He would have departed at half-time in an even darker mood if Johnstone had not repelled Saka’s angled effort with a foot. 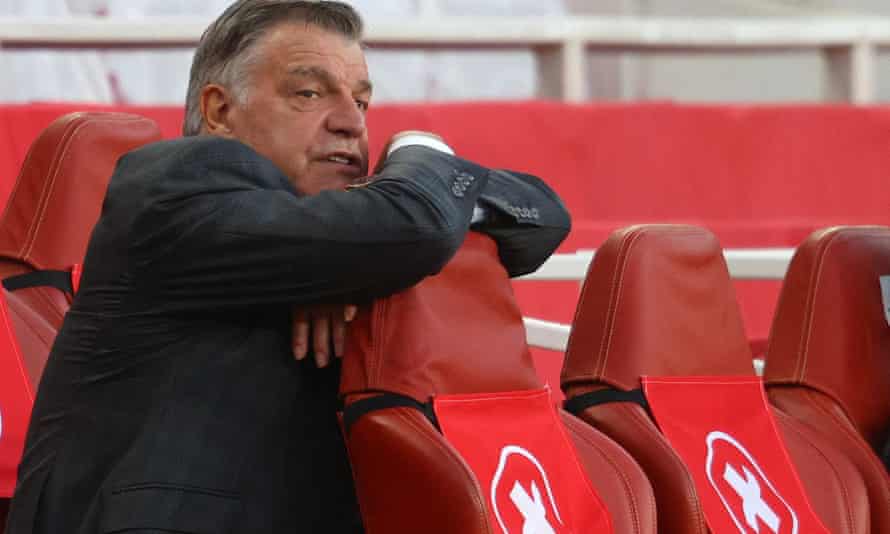 Sam Allardyce has been relegated from the Premier League for the first time. Photograph: Richard Heathcote/AFP/Getty Images

If there was a theory that Arsenal, now perfectly in control, might cut loose and unload some anger on to their opponents then the second half did not pan out like that. West Brom had given every impression of a side whose race was run but, 22 largely uneventful minutes after the interval, they won a lifeline.

It came from Pereira, who will surely be playing top-flight football for somebody next season. He carried the ball 60 yards upon receiving possession deep inside his own half after an Arsenal attack had broken down, leaving the recently introduced Kieran Tierney trailing before cutting a precise low drive past Leno from just outside the area. From near inertia, the game had been restored to life.

Darnell Furlong should have, in relative terms at least, set it ablaze but headed Matt Phillips’ cross wide from a fine position. Willian applied the final blow with his first goal for Arsenal, curled expertly past Johnstone on his 37th appearance for the club. Too little, too late for any genuine impact on their season, and Allardyce could say the same of West Brom’s exertions.