‘We will be very swift’: riot police on Melbourne streets to prevent third day of protests

Police have turned out in force outside the Construction, Forestry, Maritime, Mining and Energy Union’s headquarters in Melbourne on Wednesday to prevent a third day of protests in the city.

Hundreds of police, including officers from the riot squad, lined city streets, vastly outnumbering the handful of protesters who have tried to demonstrate so far.

Despite callouts on social media channels for a third day of protests, only a small number of people were seen outside the CFMEU’s office in the central business district in the morning. There had been five reported arrests as of 11am AEST.

Some 62 people were arrested on Tuesday, with three police officers injured and a journalist attacked as between 1,000 and 2,000 people protested in Melbourne’s CBD.

After gathering at the CFMEU in the morning, protestors shut down traffic on the West Gate Freeway, lighting flares and chanting “fuck Dan Andrews” and “fuck the jab” before being met with rubber pellets and pepper spray by riot police.

On Wednesday, the Victorian premier Daniel Andrews condemned the “ugly scenes”, warning Victoria police would “take action” against protestors who did the wrong thing.

Many of the protestors on Tuesday were wearing hi-vis clothes, but it was not clear how many were CFMEU members and how many were linked to “freedom day” protests organised on Saturday. 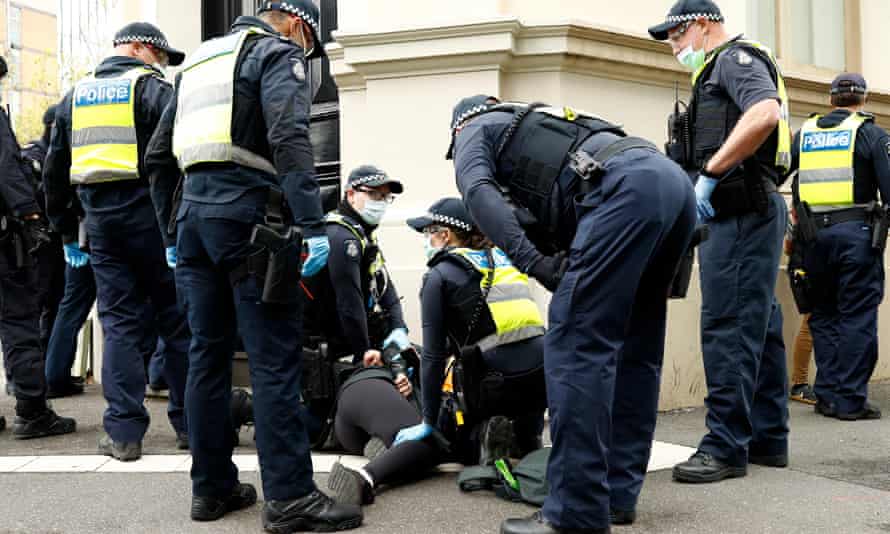 “What we saw yesterday is an insult … to the vast, vast majority of tradies or people in the building industry who are not about wrecking, they’re about building.

“They did not reflect and should not be seen to reflect an entire industry. They’re not there to protest, they’re there for a fight.”

Andrews said further announcements on mandatory vaccinations in workplaces would be made later today, but the requirement for construction workers to receive a vaccine was justified.

“Today there are more coronavirus cases in construction than there are in aged care,” he said.

“There are more cases of coronavirus in the construction sector than there are patients with coronavirus in hospitals across the whole hospital system.”

There have been 350 Covid-19 cases in the construction sector – which employs some 320,000 workers – in the past two months, across 150 different worksites. 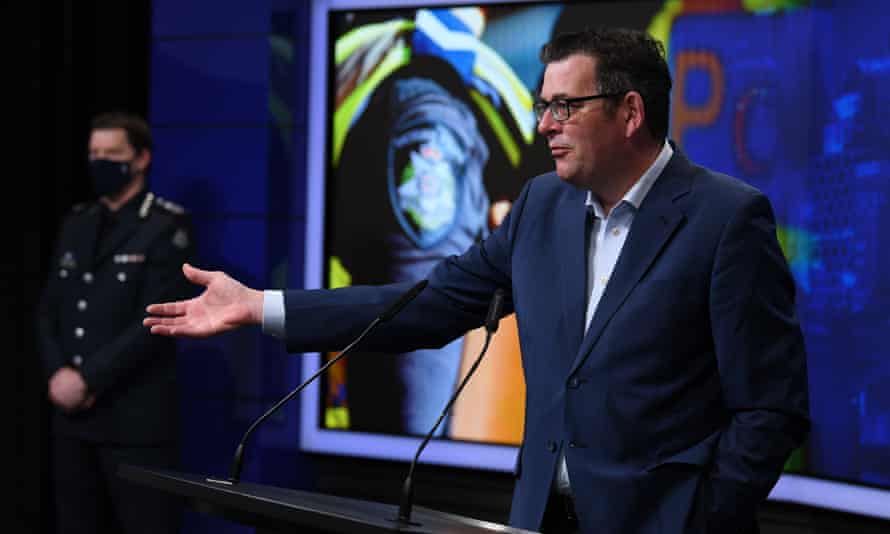 ‘They’re not there to protest, they’re there for a fight,’ the Victorian premier Daniel Andrews said of the protesters on Wednesday. Photograph: James Ross/AAP

The police minister Lisa Neville said Victoria Police would deploy “whatever tactics” they needed to in response to a third protest planned for later this morning.

“They have my full support in deploying whatever tactics they need to ensure these thugs, these violent thugs, are unable to cause further harm to our city and to our community,” she said.

No ‘cat and mouse’ games on Wednesday

The Victorian police commissioner Shane Patton said Melbourne had seen “significant unrest” over the past few days, and protestors wouldn’t be seeing any “cat and mouse” games if they decided to come to the city on Wednesday.

More than 500 police are expected to be deployed across the city.

“I certainly understand that people are fatigued, they’re tired, they have got grievances and they’re frustrated, but now is not the time for protest,” Patton said.

“We will do everything we can to stop the gatherings in compliance with the chief health officer guidelines,” he said.

“I would implore, I plead, I’d ask, any other word that I can use, to say to people who are contemplating coming in here today to protest – do not do so. You’re not going to be welcomed with open arms, I can assure you of that.

“We have significant tactics in place. We will be agile in our response, we will be very swift in our response and conduct as we have seen yesterday and the previous day will not be tolerated.”

Patton said a “range of crowd control equipment” used at protests earlier in the week were ready to be deployed if necessary.

Patton said he “wasn’t clear” whether right-wing extremists were present in the crowd on Tuesday, but was “aware” there was representation from neo-Nazi groups in recent protests.

Mother arrested over disappearance of son

Leslie Bricusse, songwriter behind Goldfinger and Willy Wonka, dies at 90

Boy, 6, recorded crying 'no one loves me' died suffering brain damage from 'shaking'

'Wouldn't pay to be a part of that!' - Liverpool boss Jurgen Klopp makes Luis Suarez admission

Who is Luis Campos? Sporting director linked with Newcastle who found Mbappe, Martial and Fabinho