A system of huge waves in the Atlantic is expected to hit the Bay of Biscay sending shock-waves to Cornwall and Devon over the weekend, according to charts by Magic Seaweed. It comes as two yellow warnings for rain have been issued across the UK.

A warning is in place across the East Midlands, East of England, London, South East England, South West England, Wales and the West Midlands until 12pm on Friday.

It states that heavy rain could lead to flooding and travel disruption.

And meterologists are also predicting huge waves to crash into the south-west of England on Saturday.

The warning from the Met Office says: “Several periods of heavy rain are likely from Wednesday afternoon until early Friday.

“30-50mm of rain is likely to accumulate quite widely during this time, with 60-90mm over some south-facing hills of southwest England and south Wales. 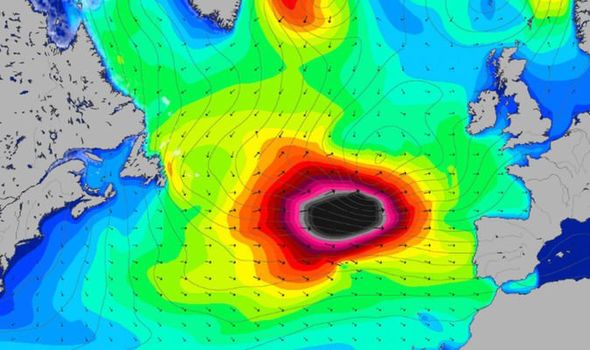 The wave chart for 6am on Saturday (Image: MAGIC SEAWEED)

“Some drier periods are likely in between the spells of rain and the longevity of these is uncertain, but the overall accumulation of rain on saturated ground is likely to lead to flooding in places.”

A warning is also in place in parts of Scotland until 9am tomorrow.

It states: “Following recent wet weather, another band of heavy rain will arrive on Thursday evening and continue overnight, easing on Friday morning. 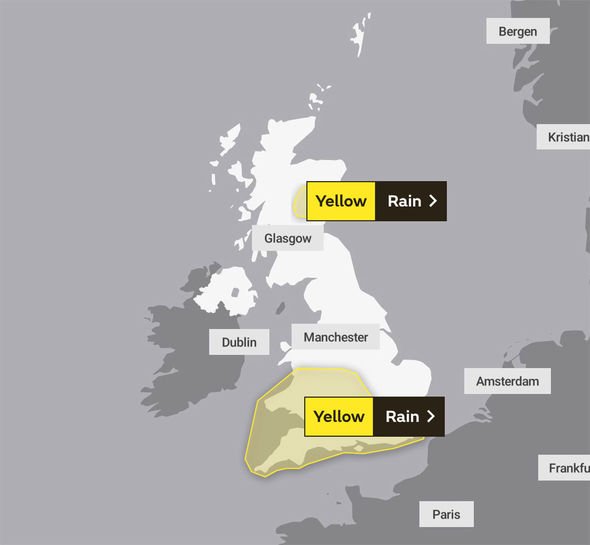 Two yellow warnings for rain have been issued across the UK (Image: MET OFFICE)

“20-30mm of rain is likely to fall within 9-12 hours, and this, combined with snowmelt from the hills, will lead to some rising river levels, and the chance of localised flooding.”

A low-pressure system moving across the UK is bringing more unsettled weather this week.

Met Office chief meteorologist Paul Gundersen said: “Today (Wednesday) we’ll see a spell of some very strong winds across western parts of the UK, with gusts of up to 70mph around some coastal locations. 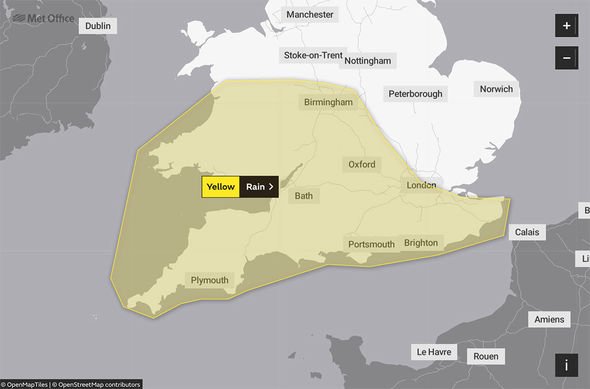 The warning is in place until 12pm on Friday (Image: MET OFFICE) 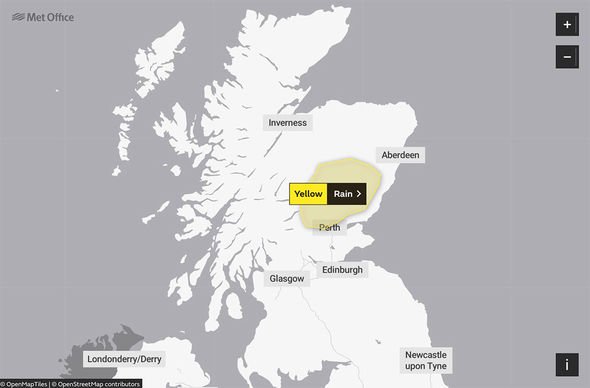 A warning is in place in parts of Scotland until 9am tomorrow (Image: MET OFFICE)

“Further bands of heavy rain are expected across southern parts of the UK on Thursday, Friday and Saturday.

“With the potential for 60-90mm of rain falling over the course of a few days, it’s quite likely we’ll see some impacts such as flooding and tricky driving conditions.”

Mr Gundersen added that the latest forecast show a “quieter spell of weather” for Christmas next week, with temperatures dropping.

He said: “At the moment there are signs for a drier, quieter spell of weather just in time for the Christmas period, with the potential for colder temperatures making things feel a little more festive.”

It comes as an estimated five million UK holidaymakers are heading overseas during the festive period, according to travel trade association Abta.

This Friday will be the busiest travel day between December 18 and January 2, Abta said.

It reported strong booking numbers for short-haul winter sun destinations such as the Canary Islands, Cape Verde, Morocco, Turkey and Egypt, while the long-haul market has seen high demand for Dubai and Goa.

Neymar owes 34.6 million euros to the Spanish tax service
Bayern are hunting for a 1.63-foot defender. He ran away to Brighton from Chelsea to play
PSG are Interested in Diego Costa. Atletico is ready to release the striker and sign Cavani instead
Lampard on the altercation with Mourinho: noted that he spoke to the referee more often than to his players. Jose and I get along well
Ronald Koeman: It is good that Messi called for unity. I hope it will be calmer now
Football is a canvas. Beautiful monologue by Daniil Chalov, who came up with a form for Vitebsk in the style of Suprematism
Hazard has a muscle injury. He may miss 3-4 weeks
Source https://www.express.co.uk/news/weather/1219138/uk-weather-forecast-latest-met-office-forecast-weather-warning?utm_source=feedburner&utm_medium=feed&utm_campaign=Feed%3A+daily-express-news-showbiz+%28Express+%3A%3A+News+%2F+Showbiz+Feed%29

Blind-drunk stepdad ‘made girl, 13, drive him to shop to get ice cream’

The eight best hand sanitisers you can buy in 2020

I'm A Celebrity castle under local lockdown that bans all mixing

Students could become tutors during lockdown and earn extra cash

How can I apply for the £5,000 Green Home Grant and can I use it towards a boiler?

Vicky Pattison terrified after stranger spits at her on the street

US election poll tracker 2020: How are Trump and Biden doing in the polls?

Kenzo gets the buzz at bee-themed Paris Fashion Week show

Every Harry Potter film to be shown at Vue in Hull