Forecasters say an area of low pressure will take charge of the UK's weather system and is expected to bring heavy rain and high winds in the seven days up to Halloween. A yellow weather warning for rain has been issued for large parts of Scotland, with the west set to be the worst hit.

The Met Office yellow “be aware” alert is in place throughout today.

The Met Office says outbreaks of rain across England will turn become light and patchy during Sunday evening and daytime showers will continue across western areas.

Overnight, there will be showers and outbreaks of rain will continue across northern and western Britain and there will also be showers for south-east England for a time. 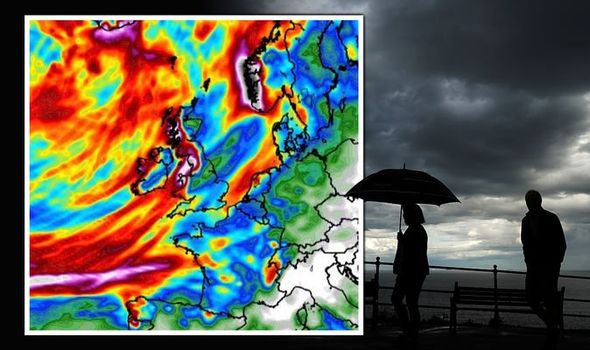 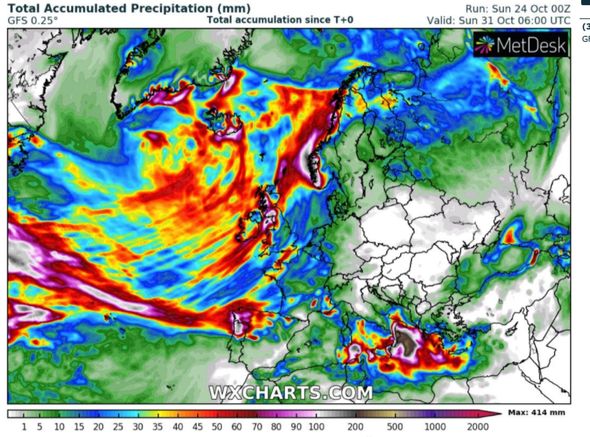 On Monday, early showers should soon clear from southeast England.

It will then be mostly dry and bright during the day with spells of sunshine and variable amounts of cloud cover.

Scattered showers will develop and these will be locally heavy across western areas.

Meanwhile, Tuesday will be mostly dull with cloudy skies and rain will spread across Northern Ireland, Scotland and parts of northern England and Wales.

READ MORE: Rishi Sunak to overrule Sturgeon and give 'Union' cash to Scotland 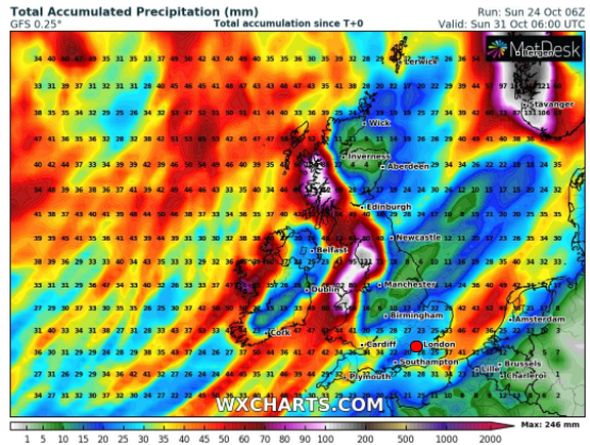 Wednesday will be cloudy but mostly dry across England and Wales with rain across Scotland and Northern Ireland slowly sinking southwards during the day.

WXCharts' Total Accumulated Precipitation charts also predict up to 121mm (4.76 inches) of rain will fall across parts of the UK Sunday, October 24 and 6am on Halloween, Sunday, October 31. 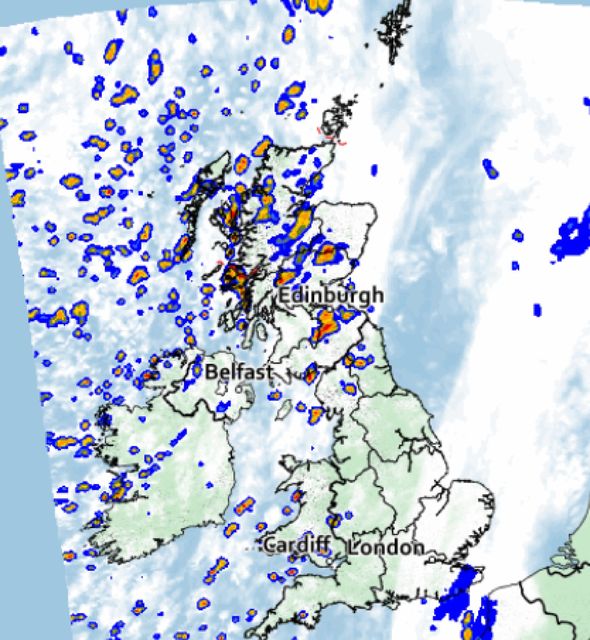 The charts also show the central belt and the South West of Scotland will see between 40 and 45mm (1.57-1.77mm) of rainfall over the next seven days.

Paul Michaelwaite, Netweather forecaster, said of this week: “The North and west will see more of the wetter, windier weather, whereas those further southeast will see more in the way of dry conditions.

"The reason for the split is that, for the time being, low pressures are going to track nearer to the north of the country, allowing those further south and east to enjoy a bit more shelter and closer proximity to high pressure over the continent.

“A very similar setup is likely to persist right through the upcoming week, but with low pressure slowly furthering its influence in the south.

“Then by next weekend and the beginning of November, it does look likely that those further south will be getting in on the wet, windy action more often.

“After the brief colder blip, which did see some snow affecting the high ground of Northern Britain on Friday, there's no sign of anything cold during the coming days.”