UK storm tracker LIVE: Over a month's worth of rain DUMPED in 2 hours - Met Office warning

BBC Weather: UK to be hit by stormy conditions as week progresses

With hardly any breeze, the heavy showers became stationary around the southeast of the island and have dumped more than 120mm of rain near the town of Ventnor so far today. There are reports that the A3055 has completely flooded and drivers have been urged to find alternative routes. In Ryde, more than half a month’s rain fell in only two hours, prompting a flood alert to be activated in the area.

There is also a flood warning in place at Monktonmead Brook at St Johns where residents have been told flooding is expected and action is immediately required.

Isle of Wight Fire and Rescue Service advised those affected by flooding to move their valuables upstairs and do what they can to keep their electronics away from water.

Thunderstorms and torrential downpours could cause flooding across more of the UK, particularly in parts of southern England and Wales. 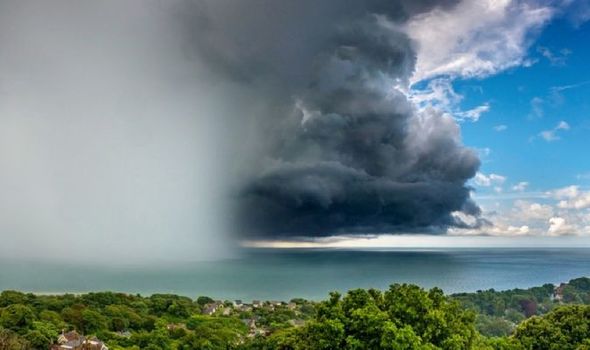 The Met Office has issued a yellow weather warning for storms on Monday which covers areas including Cardiff, Gloucestershire, Hampshire, Oxfordshire and London and is in place until 11pm.

Up to 50mm of rain could fall in the space of just a few hours, according to forecasters. 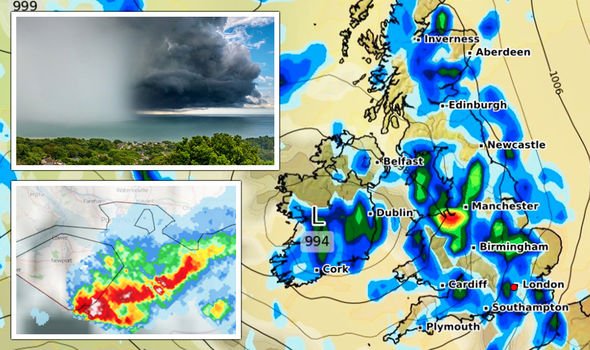 UK storm tracker LIVE: More than a month's worth of rain DUMPED on Isle of Wight (Image: WXCHARTS-NETWEATHER-BNPS) 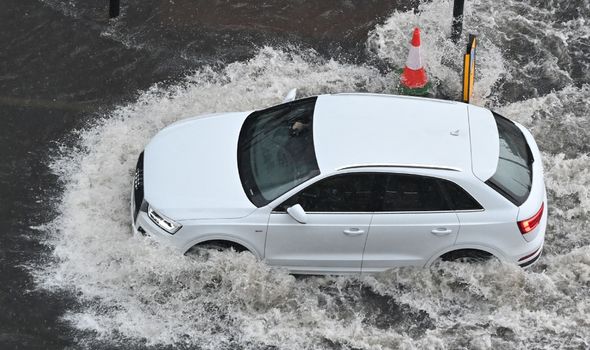 Up to 50mm of rain could fall in the space of just a few hours (Image: GETTY)

Nicola Maxey, a spokesperson from the Met Office, said: "This can lead to surface water flooding as drains cannot get rain away fast enough and spray on roads.

"Not everyone within the area will see storms or rain, but the risk is there.

"More rain will be coming through this week, with the potential for thunderstorms on Wednesday."

A large crack has appeared on Shore Hill, Isle of Wight following a deluge of torrential rainfall.

During the apocalyptic rainfall, the force of the water lifted a 50kg manhole cover along Shore Hill and the public has been advised to stay away.