The UK has been drenched with a month’s rainfall in a day for parts of the country leading to flood warnings – and more showers are expected.

Heavy rain is set for Saturday after a dry start and then it is likely to continue into Sunday especially in the south of England.

The Environment Agency has issued 39 flood alerts which are centred around the South East and the Midlands and drivers have been told to take care.

Parts of the South East have had up to a month’s rainfall in one day, the Met Office has said.

Hampshire and Buckinghamshire have seen heavy rain over the past 24 hours while Bedfordshire has also had wet weather.

It is expected to be a wet weekend with showers on Saturday afternoon and heavy rain on Sunday (Image: PA)

Otterbourne was lashed with 67mm of rainfall from 11pm on Thursday to 5pm Friday, while Dancers End, Drayton Parslow, Toddington had 65mm and southern Farnborough, had 57mm.

There has been an abrupt end to the sweltering heat earlier in the week for much of the UK but temperatures could rise slightly over the weekend.

The Environment Agency’s 39 flood alerts are in London and surrounding areas, Kent, parts of the Home Counties, the West Midlands and Wiltshire.

A yellow weather warning has been issued for rain covering much of England, apart from Devon, Cornwall and the North West. 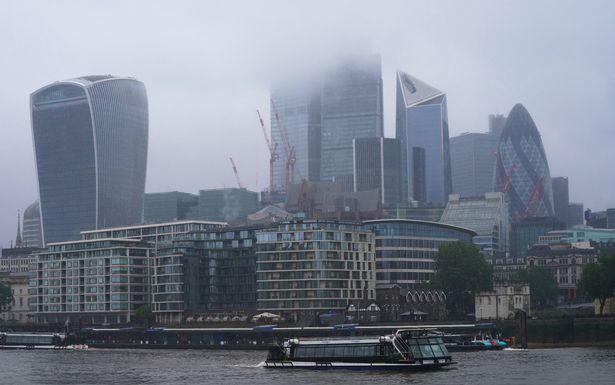 There are 39 flood warnings in place after the heavy rain on Friday (Image: PA)

On Saturday, temperatures will range from highs of 19C in London and Cardiff to 18C in Belfast and 17C in Edinburgh.

This is due to the mercury being set to rise a couple of degrees everywhere on Saturday and remaining stable on Sunday.

Met Office spokesman Grahame Madge said: “In the South East, there will be rain every day for the next few days, and some places could see up to 80mm on Friday.

“The heaviest rain will be in places from Hampshire up to Yorkshire, where we are quite likely to see intense rainfall which will clear away.” Drivers have been told to take care due to the flooding and to give greater distance between vehicles (Image: PA)

Saturday is predicted by the Met Office to have some sunshine across most of the UK early on with showers across Scotland and south England later on in the day.

Sunday though is expected to be a washout with heavy and thundery rain in England.

The Environment Agency has urged drivers not to plough through flood water, warning that just 1ft of flowing water is enough to float a vehicle.

Surrey Fire and Rescue Service has also alerted drivers to “lots of standing water” on the roads, while the Driver and Vehicle Standards Agency (DVLA) has issued advice on driving safely through summer showers.

The DVLA’s tips include allowing at least double the usual separation distance between your vehicle and the one in front, keeping speed down and using dipped headlights so that other drivers can see you.

This Evening and Tonight:

Rain in southern and eastern England, some heavy, possibly thundery, clears this evening but leaving a lot of cloud. Further north and west, possibly an isolated shower, but most parts fairly chilly with clear spells and the odd mist patch.

Cloud breaking slowly across southeastern areas leaving some sunshine for much of the UK. The odd shower across Scotland, while thickening cloud brings possible showery outbreaks across southern England later.

Outlook for Sunday to Tuesday:

Unsettled across the south with spells of rain, locally heavy and thundery, mainly for England. Less unsettled for Scotland and NI. Temperature cool to near normal.

Flick about Muller and Hummels: There is no age at which players will be excluded from the national team
Beckham's Inter Miami broke a series of 7 matches without a win. Higuain made a double
Head of the UAF National Teams Committee Markevich: I don't know if Shevchenko is leaving the national team. He is on vacation
Man City will not be able to sign Kane after the transfer of Grealish. The club does not have such money (MEN)
16-year-old Borussia forward Mukoko wanted to end his career because of talk about his age
Laporta visited the location of Barca in Germany and greeted the players
Chernomorets from FNL-2 will be awarded the 3rd technical defeat in a row due to quarantine