Two suicide bombers have killed at least 32 people and wounded more than 100 at a Baghdad market, raising fears of a return to the militant violence seen for years in Iraq after the 2003 US invasion and during the Islamic State era.

In the worst such attack in three years, bombers lured shoppers towards them and set off devices they were carrying at a secondhand clothes bazaar. It happened in mid-morning when the market was teeming with people after the lifting of nearly a year of Covid-19 restrictions across the country.

The interior ministry said the first bomber claimed he was ill and then detonated his device when a crowd gathered to help him. “The second suicide bomber blew himself up when people gathered to move the wounded from the first explosion,” the ministry said.

There was no immediate claim of responsibility, but the strike bore the hallmarks of the terror group Isis, whose remnants have melted back into towns and cities after its defeat in Iraq and Syria in early 2019. Isis has been attempting to reorganise in Iraq’s western deserts and near its eastern border. Though its leadership and rank and file have been decimated, it retains the capacity to launch small but devastating attacks.

The Guardian visited the scene of devastation after the blast and saw scattered clothes smeared in dirt and blood, including a white winter jacket, blue sweaters and a pink children’s coat. A large pile of children’s shoes had tumbled to the ground from a push cart. A man walked around picking up charred pieces of flesh and putting them in a plastic bag, as a faint acrid smell hung in the air. Such scenes, reminiscent of the worst atrocities of al-Qaida and later Isis, had been absent from the streets of Baghdad since the defeat of Isis.

One man, who gave his name as Ayad, tugged at the sleeves of two grey sweaters that hung from a stall, showing the crowd gathering in front of him the splatter of dark crimson stains. “Look. This is the blood of the martyrs, the blood of innocent and poor people,” he shouted.

A young man dressed in a green tracksuit, who did not want to give him name out of fear of reprisal, said: “I was in bed when the [first] explosion took place and I was lifted up and down by the force of the explosion. I ran out and I heard the second explosion, and I saw people scattered around, lying in the middle of the street, like slaughtered sheep.”

A video shot from a nearby building showed a crowd of people milling around before a red and orange ball of fire erupted from the second explosion, followed by a thick cloud of dust, scattering bodies on the ground and sending people running for cover.

Another young man, pushing a wooden cart smeared with blood, said the first bomber had fallen on the ground and called for help. After the blasts, he said, “we started ferrying the injured and dead to Tayran Square and put them in cars. There were no ambulances, just the police firing in the air.”

The attack came as Iraqis prepare for an election, events often preceded by bombings and assassinations. In such a climate, not everyone was pointing the finger at Isis.

“How could the terrorists infiltrate Baghdad?” asked Ayad. “The city is surrounded by checkpoints, militias and security forces. What have those people done? They were all poor from the slums of the city. They were not killed by the terrorists – they were killed by the feuding parties. The elections are upon us and they will burn Baghdad.”

Walking away from the stall, Ayad moved to stand next to a puddle of blood. “I should have been with them,” he said, his eyes clouded with tears. “I walked through the market five minutes before the explosion. My brother was martyred fighting Isis in Falluja, and I served nine years fighting in the army before I resigned because I am disgusted with the politicians running the country.”

The ministry ordered the city’s hospitals, already overwhelmed by the coronavirus pandemic, to treat the wounded. Bodies lined a corridor of at least one central hospital.

Baghdad residents tried to track down relatives feared to have died in the attack. “My brother is married and has two children. He went out this morning to earn a living for his little ones and now he’s nowhere to be found,” Abbas Samy, 25, told AFP. 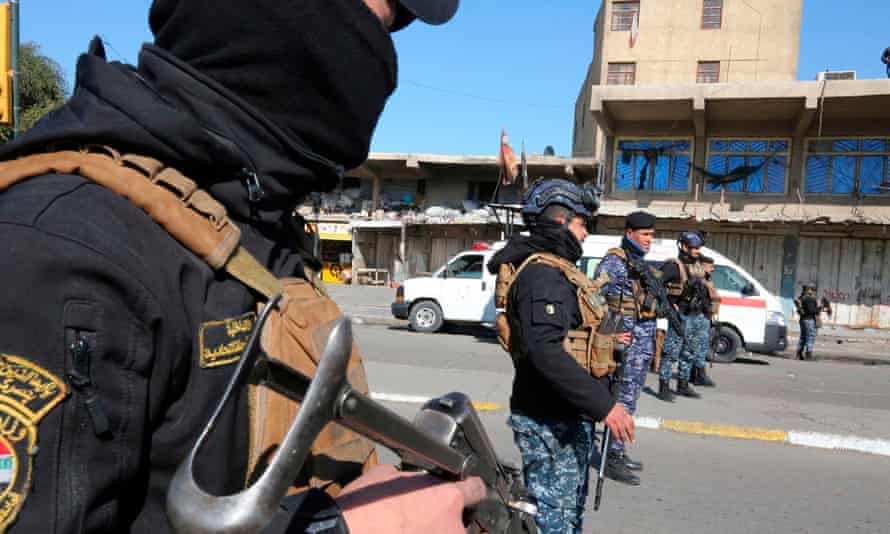 The military on guard in Baghdad after the bombings. Photograph: Sabah Arar/AFP/Getty

At the height of Isis’s powers the terror group reached the approaches to Baghdad and was held back by a counter-offensive by militia groups and the Iraqi military, which had been splintered by Isis’s rapid gains. As the national military regrouped, Isis gradually withered, resorting to suicide bombings and killing officials. Since 2017 it has rarely been able to penetrate security cordons near central Baghdad.

Mazen al-Saadi, 34, said he was lucky to be alive. He had been shopping in Tayaran Square with a good friend when the blasts ripped through the market around them. “He was just a few metres in front of me. After the blast, he just vanished and I wasn’t able to find him – until now,” Saadi told AFP. After a few hours of searching, he had just located his friend’s body at the Sheikh Zayed morgue.

With a sense of bitter resignation, Saadi said he had anticipated a return to violence in his native Baghdad. “We were always thinking about the explosions coming back – we thought they could return at any moment, especially as the elections were getting closer,” he said.

Iraq’s president, Barham Salih, led political figures in condemning the attack, saying the government would “stand firmly against these rogue attempts to destabilise our country”.

Pope Francis, who hopes to visit Iraq in March, deplored the “senseless act of brutality”. The United Nations’ Iraq mission offered condolences to the victims and said in a statement: “Such a despicable act will not weaken Iraq’s march towards stability and prosperity.”

After the fall of Saddam Hussein in 2003, successive Iraqi governments struggled to assert themselves. Widespread social unrest in late 2019 resulted in the rise of the current prime minister, Mustafa al-Kadhimi, who this week delayed national elections from June until 10 October.

Kadhimi, a former national intelligence chief who led Iraq’s fight against Isis, has faced a sustained challenge to his authority from militia groups backed by Iran and from lawmakers in his administration tied to Tehran. He was backed by the Trump administration and is held in good stead by senior officials in the new US government.

Golovin scores points every 32 minutes in 2021 - best result in Ligue 1
Beckham on Messi and Ronaldo: These are the players we want to sign at Inter Miami
Arteta after 3-1 with Leicester: Arsenal are unacceptably low in the table. We need to improve the situation
Golovin on two assists: The task when coming on as a substitute was to sharpen the game. Probably, it was possible
Schalke confirmed the resignation of the head coach, the sports director and three other people. The team is last in the Bundesliga
Robertson on Liverpool injuries: No one can cope if there are 18 defensive combinations during the season
Monaco Golovin has 10 wins and 2 draws in the last 12 matches of Ligue 1
Source https://www.theguardian.com/world/2021/jan/21/baghdad-suicide-bombers-market-three-years