Two tiny twin monkeys, no bigger than ping pong balls, have been born at Chester Zoo.

The new arrivals, measuring just two inches in length and weighing 10 grams, are eastern pygmy marmosets, one of the world's smallest species of monkey.

Zoo keepers say they are so small it will be some time until their genders are known. However, the twins, born to parents Zoe, three, and Baldrick, four, are already highly inquisitive.

Primate keeper Holly Webb said: “It's wonderful to see new additions within the marmoset family and it's almost unbelievable just how small the babies are when they are first born. They are no bigger than a ping pong ball.

"Mum Zoe and dad Baldrick have jumped straight into parenthood. Zoe is ever so caring and, unlike other primates, dad is heavily involved in the upbringing of the youngsters. 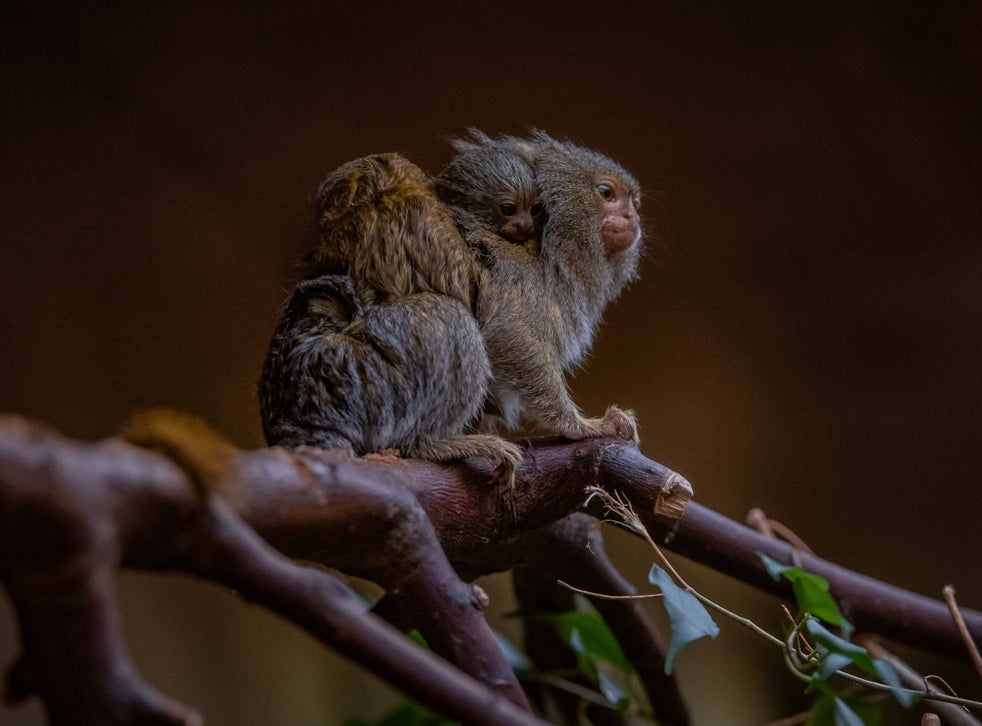 "Baldrick sensed that Zoe was ready to give birth and even put on a little extra weight to give him the energy to care for the twins.

"He's really got stuck into the parenting – we spotted him carrying the babies around on his back when they were just one day old.

"The babies are already very inquisitive and aware of their surroundings. I can't wait to see them develop their own little personalities."

The species, native to the rainforests of western Brazil, south-eastern Colombia, eastern Ecuador and eastern Peru, is threatened by habitat loss and often exposed to hunting or capture for the illegal pet trade.

Dr Nick Davis, deputy curator of mammals at the zoo, said: "Despite their tiny stature, pygmy marmosets make a lot of loud noises, especially when calling out to attract a mate or warning others of danger.

"Even though they are the world's most miniature species of monkey, their whistles and squeals can be heard throughout the rainforest.

"Unfortunately, as their forest homes continue to disappear, this can be to their detriment, as a lack of cover leaves them even more exposed to illegal hunters and trappers.

"Thankfully, conservation teams are working hard to restore forest and create safe areas while new arrivals at the zoo help us to further highlight what needs to be done to prevent their extinction."

Pygmy marmosets are social animals, have one mate for life and their tails are longer than their bodies, which helps them to balance as they pass from branch to branch through the forest.

The new additions will grow to around eight inches long and 130 grams.

Liverpool lost at Anfield for the first time in 69 Premier League games (and Burnley). Klopp's team has yet to score in 2021
Sevilla are Interested in Papu Gomez
Rookie of the Urals Ibrahimi: will Manifest itself in RPL - sparkle everywhere. Good league for pumping
Juventus have signed Switzerland U21 striker Lungoyi and returned him on loan to Lugano for 1.5 years
Milan leases Tomori from Chelsea with the right to buy for 28 million euros. Medical check-up-today
Borussia Gladbach signed Kone for 9 million euros. The prop will finish the season in Toulouse
We want Messi to stay until the end of his career, but first we will think about the club. Even the best player in history is no more important than Barca. Freisha about Leo
Source https://www.independent.co.uk/news/uk/home-news/tiny-monkeys-chester-zoo-eastern-pygmy-marmosets-b1766599.html