Tunisian president Kais Saied has suspended parliament and dismissed prime minister Hichem Mechichi after a day of protests against the ruling party brought the country’s political crisis to a head.

Cheering crowds quickly flooded the streets of the capital Tunis after Saied’s announcement on Sunday, celebrating and honking car horns in scenes that recalled the 2011 revolution that brought democracy and triggered the Arab spring protests that convulsed the Middle East.

“We have been relieved of them,” said Lamia Meftahi, a woman celebrating in central Tunis after Saied’s statement, speaking of the parliament and government.

“This is the happiest moment since the revolution,” she added.

Military vehicles surrounded the parliament building late on Sunday, according to Reuters. Witnesses said people who had gathered nearby cheered and sang the national anthem as the vehicles apperared outside the building. 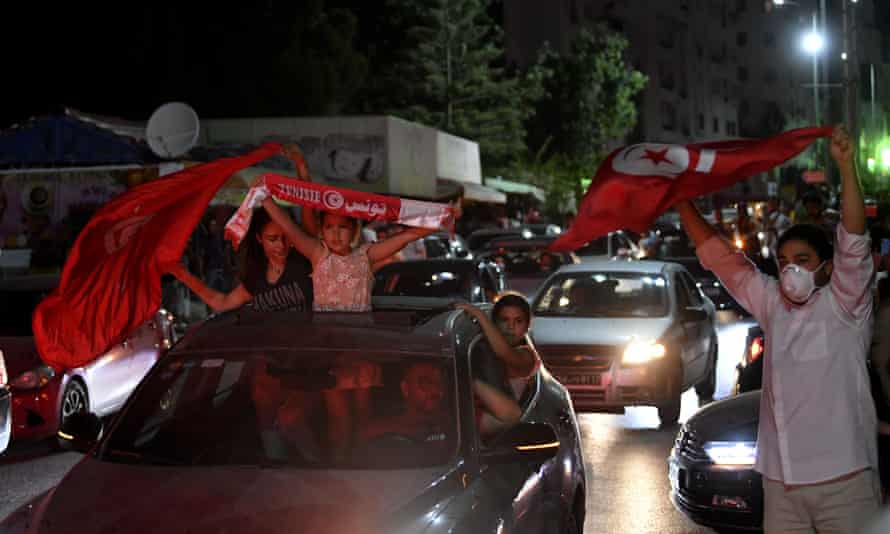 However, the extent of support for Saied’s moves against a fragile government and divided parliament was not clear and he warned against any violent response.

“I warn any who think of resorting to weapons... and whoever shoots a bullet, the armed forces will respond with bullets,” he said in a statement carried on television.

Earlier, thousands of Tunisians had marched in several cities protesting against the ruling party which they accused of economic mismanagement, corruption and failure to prevent crippling rates of coronavirus infections.

Hundreds of protesters had gathered in front of parliament in Tunis, shouting slogans against the Islamist-inspired ruling Ennahdha party and the premier Hichem Mechichi.

Protests were also reported in the towns of Gafsa, Kairouan, Monastir, Sousse and Tozeur.

“The people want the dissolution of parliament,” the crowd chanted.

Several protesters were arrested and a journalist was injured when the crowd hurled stones and police fired tear gas canisters. 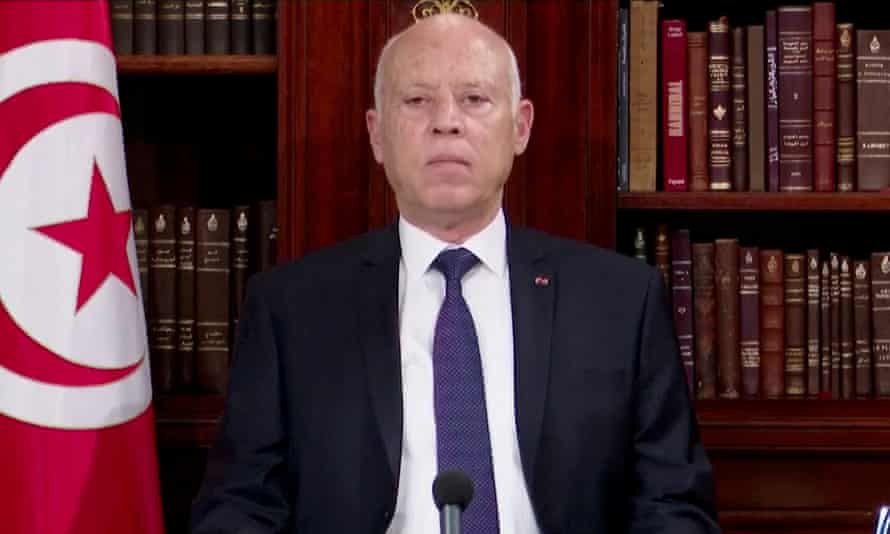 Saied said in his statement that his actions were in line with the constitution, and cited article 80 to suspend the immunity of members of parliament.

“The constitution does not allow for the dissolution of parliament, but it does allow for its work to be suspended,” the president said, citing Article 80 which permits such a measure in case of “imminent danger”.

“Many people were deceived by hypocrisy, treachery and robbery of the rights of the people,” he said.

Saied said he would take over executive power “with the help” of a government headed by a new chief appointed by the president himself.

He also said that the immunity would be lifted for parliamentary deputies.

Ennahda, banned before the revolution, has been the most consistently successful party since 2011 and a member of successive coalition governments.

Its leader, Rached Ghannouchi, who is also parliament’s speaker, immediately labelled Saied’s decision “a coup against the revolution and constitution”.

“We consider the institutions still standing, and the supporters of the Ennahda and the Tunisian people will defend the revolution,” he added, raising the prospect of confrontations between supporters of Ennahda and Saied.

Tunisia has been overwhelmed by Covid-19 cases, including more than 18,000 people who have died in a country of around 12 million.

The country’s fractious political class has been unable to form lasting, effective governments.

Since Saied was elected president in 2019, he has been locked in a showdown with Mechichi and Ghannouchi.

Their rivalry has blocked ministerial appointments and diverted resources away from tackling Tunisia’s many economic and social problems.

Anelka on replacing Messi: Leo will never forget that Pochettino did this. You can't treat him like that
Ted Lasso is the most popular comedy about sports. The idea came from an advertisement for the Premier League, the actors do not understand anything about football at all
Koeman about Fati: We will give him more playing time, but everything depends on his condition
Ivanov has been appointed chief referee of the Sociedad - Monaco Europa League match
UEFA will appeal against the decision of the Madrid court on the Super League and apply for the dismissal of the judge
Messi - in PSG's application for the match against Manchester City
Sheriff in the Champions League-the miracle of the year. The cancellation of the limit helped, but so far in Moldovan football it is terrible: neither fans, nor money

The Conservatives are failing young people – but there is another way

Brits spend TWO MONTHS cleaning up after their dogs during its lifetime, study reveals

HGV topples over into oncoming traffic on busy road

Covid: India to begin vaccine trials for 7 to 11-year-olds

What does the winner of Celebrity SAS: Who Dares Wins get?

Brexit has been a ‘factor’ in fuel crisis, Grant Shapps admits

Who is Sorba Thomas, the new Wales star replacing injured Gareth Bale after causing a stir

Coronavirus infection rates, cases and deaths for all parts of Wales on Tuesday, September 28

Is the supply crisis caused by Brexit or by the Covid pandemic?

When is Maid released on Netflix? Four Weddings and a Funeral star leads cast

Two thirds of people burgled this year had made same mistake

Inside twisted mind of R Kelly, the vile predator who raped kids, held them as sex slaves & made them call him ‘Daddy’

Who was singer Andrea Martin and what was her cause of death?

Mum-of-four, 41, found dead in undergrowth by A3 in Surrey had been strangled as man, 51, charged with murder

Swansea council pension fund has soared by an extraordinary £1.7m per day

Victim of 'depraved' paedophile 'thought she could be pregnant'

What channel is Manchester United vs Villarreal on? TV, live stream details and team news

Devastated mum, 33, asked 'am I going to die' after being diagnosed with aggressive cancer

Evelyn’s Table pushes all the boundaries of ingenuity

Roger Hunt: The hero of the Kop who helped England to World Cup glory

What is red diesel and can I get fined for using it?