President Donald Trump has teased a “big Trump Rally” in Georgia as he while reportedly considers plans to announce a second re-election bid as it becomes increasingly clear he has no path to overturn the results of the 2020 race.

The president said he would visit the state to support both Georgia Republican incumbents David Perdue and Kelly Loeffler, who are running for re-election in the January special elections, describing the two GOP candidates as “fantastic people who love their Country and love their State.”

He has meanwhile continued to promote a barrage of misinformation surrounding his electoral defeat, attacking President-elect Joe Biden while falsely claiming the Democratic Party rigged the election against him. The president’s false claims about systemic vote rigging have now been refuted by his own Justice Department and Department of Homeland Security.

Check out The Independent’s live updates and coverage below.

More than 100,000 people are currently hospitalized for Covid-19 in the US

More than 100,000 Covid-19 patients are currently hospitalized in the US, according to the COVID Tracking Project.

That record-breaking figure is the first time that hospitalisations have surpassed 100,000 since the onset of the public health crisis.

It is also marks the first time deaths have exceed 5,000 within a two-day period.

The Independent’s Graeme Massie has more on Ivanka Trump’s deposition in the inauguration lawsuit against the Trump Organization. 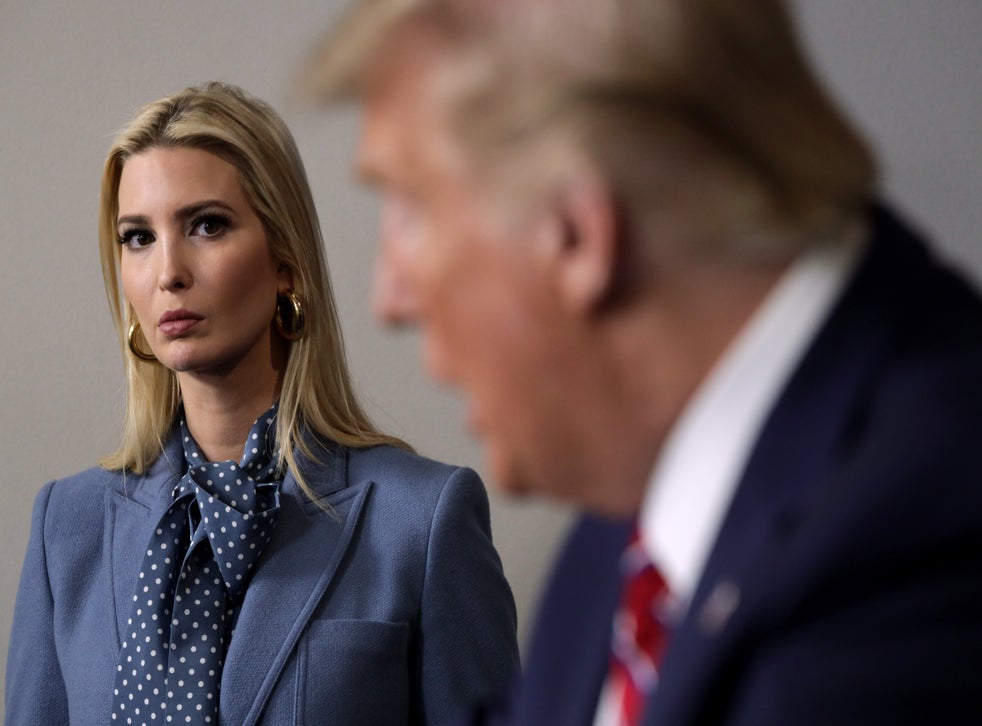 New York Attorney General Letitia James has responded to Trump’s latest baseless attacks on election integrity, in which he also complained about investigations into the Trump Organization:

“As the independently elected attorney general of New York, I have a sworn duty to protect and uphold state law. Last year, after Michael Cohen’s testimony, our office opened an investigation into the financial dealings of the Trump Organization. That investigation continues today. Unlike the president and the unfounded accusations he hurled today, we are guided by the facts and the law, and the politics stop at the door. Period.”

In filmed remarks from the White House released on Wednesday, the president said he is likely facing legal issues when he leaves office.

“Now, I hear that these same people that failed to get me in Washington have sent every piece of information to New York so that they can try to get me there,” he said.

A whole bunch of congressional Republicans are already lining up behind a Trump presidential campaign in 2024, with full-blown Trumpism the apparent dominant ideology in the GOP, according to Politico.

Senators Lindsey Graham, Josh Hawley and Rick Scott are encouraging Trump’s 2024 run, and a number of other GOP members of congress agree that he would be the favorite in the race regardless of who runs.

Here’s how Politico sees the post-2020 landscape: “The political calculus is also clear. While he will soon lose the Oval Office, he’ll still have his Twitter handle and will still be in firm control of his base. Republicans are loath to get cross with Trump, who could play a central role in Senate and House primaries in 2022 and create trouble for incumbents that break with him. Future GOP presidential candidates will also be eager to court his supporters if he ultimately passes on another campaign.”

Breaking now: Ivanka Trump was deposed on Tuesday as part of an investigation into the misuse of inaugural funds, according to a court filing first reported by CNN.

The attorney general’s office in Washington DC had sued the Trump Organization and inaugural committee in January after allegations that they had abused more than $1m raised by the nonprofit committee by “grossly overpaying” for event space during the 2017 presidential inauguration.

Secretary of State Mike Pompeo and his wife Susan Pompeo are planning large holiday parties at the State Department, even as the agency warns employees against in-person gatherings amid a deadly surge in coronavirus cases.

The Washington Post reports 900 people have been invited to a function on 15 December, which experts warn will turn into another super-spreading event infecting the top reaches of the federal government.

The State Department said it plans to “fully enforce social distancing measures at this reception, and face coverings are mandatory for admittance.”

CDC director Robert Redfield has warned that “December and January and February are going to be rough times” as the growing coronavirus crisis sees a holiday surge, according to The New York Times.

“I actually believe they’re going to be the most difficult time in the public health history of this nation," he said in remarks to the Chamber of Commerce Foundation.

The director also hit out at conflicting guidance about wearing masks, without directly naming Donald Trump or Scott Atlas, his coronavirus adviser who left the White House this week, saying that "when you really want to get everybody on board, you’ve got to have clear, unified, reinforced messaging,”

“The time for debating whether or not masks work or not is over," he said. “We clearly have scientific evidence.”

In a filmed 46-minute address from the White House, the president discussed his campaign’s attempts to overturn the results of the 2020 presidential election, during which he has claimed without evidence that “lots of bad things happened during this ridiculous period of time.”

The president has spent months trying to undermine the results before ballots were even cast, and he has accused Democrats of interfering in the electoral process – which he said is “under coordinated assault and under siege” – in a rambling set of remarks he said are the most important he has ever delivered.

After urging his supporters not to vote by mail, and a big push among Democrats to use mail-in or dropped-off absentee ballots during the pandemic, the president now claims that he "miraculously" and "unexpectedly" lost when those ballots were counted.

Kayleigh McEnany attacked Democrats for “hypocrisy” over the Covid-19 crisis as her husband watched her briefing without a mask on Wednesday.

Milan and West Ham are Interested in Firpo. Barcelona is ready to release the defender
Jamie Carragher: Firmino worries me, maybe he's not fit. Liverpool's attacking trio will fall apart sooner or later
Mario Mandzukic: It will be an honor for me to wear the iconic shirt and fight for Milan
Inter is known as Inter. There's no reason to add anything else. Moratti on changing the club's name
Laporta on the election: For Messi to stay, the president must appear as soon as possible. The postponement only hurts
Schalke and Ajax have agreed to move Huntelaar
Zidane on the criticism: It doesn't matter if I'm tired or not. Not only does the coach work, there is a lot behind the club
Source https://www.independent.co.uk/news/world/americas/us-election-2020/trump-news-live-biden-election-giuliani-b1764922.html

Why do dogs lick?

EU has been able to make ‘quantum leap’ without UK, Brussels’ ambassador says

Court hears the weapons were recovered in police raid