Cry, the beloved country. Donald Trump ensured Tuesday’s first US presidential debate was the worst in American history, a national humiliation. The rest of the world – and future historians – will presumably look at it and weep.

More likely than not, according to opinion polls, his opponent Joe Biden will win the November election and bring the republic back from the brink. If Trump is re-elected, however, this dark, horrifying, unwatchable fever dream will surely be the first line of America’s obituary.

Only one man looked remotely presidential on the debate stage in Cleveland, Ohio, and it was not the incumbent. He interrupted, ranted, raged, spewed lies and interrupted some more. Oh, and he passed on an opportunity to condemn white supremacists, instead telling them to “stand back and stand by”.

The debate moderator, Chris Wallace of Fox News, did not cover himself in glory either. He was a like a school supply teacher, hopelessly out of his depth as unruly children run riot. He did not enforce the rules or cut the president’s mic.

Facing this asymmetric bullying, Biden showed self-control and stood his ground. He spoke for tens of millions of Americans when he demanded: “Will you shut up, man?” – the Biden campaign rushed out this slogan on a T-shirt before the debate was even over.

Five weeks before the election, the debate pitted an ageing white male against an ageing orange male sweating like Richard Nixon in 1960. Anyone hoping for elegant verbal jousting or rapier-like wit was in for a disappointment.

Perhaps it was just as well that coronavirus guidelines ensured the men stood apart at separate lecterns on blue carpeted stage beneath an eagle symbol with the words “The union and the constitution forever”. No handshakes, no prowling by Trump as he did behind Hillary Clinton’s back in 2016, no physical violence. Katie Hill, a former Democratic congresswoman, tweeted: “I literally don’t know how Biden is not running over and punching him in the face.”

Trump looked more like a challenger than an incumbent, butting in and hurling petty insults such as: “Don’t ever use the word ‘smart’ with me … There’s nothing smart about you, Joe.” The hapless Wallace struggled to gain control as viewers heard only a cacophony of voices. “I am the moderator of this debate, let me ask my question,” he almost pleaded.

Sometimes Wallace was too easy on Trump, though he did tell him at one point: “Frankly, you’ve been doing more interrupting.”

Biden mostly kept his cool, preferring to laugh in world weary bemusement. “That was really a productive segment, wasn’t it?” he said sarcastically early on. “Keep yappin’, man.” 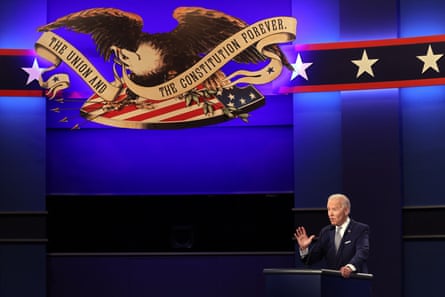 Other memorable lines included: “You are the worst president that America has ever had”; “The fact is that everything he’s saying so far is simply a lie. I’m not here to call out his lies. Everybody knows he a liar”; “It’s hard to get any word in with this clown – excuse me, this person”; “President Trump wouldn’t know a suburb unless he took a wrong turn.”

And, on the coronavirus crisis, which has killed more than 200,000 people in the US: “‘It is what it is’ because you are who you are,” Biden said as he blamed Trump for mishandling the pandemic, and added: “Maybe you can inject some bleach into your arm, that would take care of it.” At moments Biden cut through the chaos by looking directly at the camera and appealing to voters: “This isn’t about his family or my family,” as the attacks turned highly personal. “It’s about your family.”

He also avoided some of the missteps that plagued his Democratic primary debate performances. He brushed off the Trump campaign attack that he is beholden to the far left, insisting: “I am the Democratic party right now.”

Biden condemned Trump over recent reported comments denigrating dead soldiers as “losers” and “suckers”. He said of his late son Beau, who served: “My son was in Iraq. He spent a year there. He got the Bronze Star. He got Conspicuous Service Medal. He was not a ‘loser’. He was a patriot.”

Trump clumsily tried to change the subject to Biden’s son Hunter. Biden retorted: “I’m talking about my son Beau Biden,” and then addressed the attack on Hunter, falsely claiming he was dishonorably discharged from the military.

There was not on iota of sympathy from the president or effort to pay tribute to Beau son, who died of a brain tumor in 2015.

It was a brief moment of emotional clarity in an otherwise nightmarish, incoherent mess. Worst of all, when Wallace asked Trump if he was willing to condemn white supremacists and militia groups, the president couldn’t do it, saying: “Proud Boys, stand back and stand by! But I’ll tell you what, somebody’s got to do something about antifa and the left.”

It is hard to imagine Trump won over a single voter in the suburbs, where he is particularly trailing Biden, or anywhere else. Most viewers will have likely been left feeling angry or sad and may have switched off long before the end.

Wallace mused earlier this week: “If I’ve done my job right, at the end of the night, people will say, ‘That was a great debate, who was the moderator?’”

The near universal verdict was - expressed in the words of CNN’s political correspondent Dana Bash – a “shitshow”.

Naumov about the defeats of Zenit, Loko and Krasnodar in the RPL after the Champions League: Lack of professionalism in the players and the ability of the coaches
Ronaldo violated the coronavirus Protocol. An investigation is underway. Italian sports Minister on the departure of the player from Turin
Sports Director of Khimki about 2:0 with Rostov: We proved that we are a team and can win on the road
Jaka defeated Arsenal and Leicester did not create anything except the goal. We will try to take points from Manchester United
Pirlo about 1:1 with Verona: Juve do not need a slap in the face to Wake up and play intensely
Everton and Liverpool in the top 2 at the end of the round in the Premier League for the first time in 27 years
Arteta about 0:1 with Leicester: I Don't know why the hell our goal was canceled. It is difficult to create space when 10 people are sitting behind the ball line
Source https://www.theguardian.com/us-news/2020/sep/30/trump-debate-national-humiliation-analysis

Girls with husky voices are more likely to have affairs, study claims

Look like you’ve walked straight out Steptoe and Son and pay £1,150 for the privilege