Tottenham forward Son Heung-min has described his military service in South Korea as “tough” but said he was able to enjoy it during the Premier League’s enforced hiatus.

All South Korean men must complete mandatory military service by the age of 28 but Son, who turns 28 in July, avoided missing any time for Tottenham as he completed his last month of service with the season in England suspended amid the coronavirus pandemic.

The enforced break has also allowed Son to complete his recovery from the arm fracture he suffered in Spurs’ 3-2 win over Aston Villa in February.

“It’s been a very busy three months,” Son said in a video on the Spurs website. Son was excused the full 21-month military service after helping South Korea to victory in the 2018 Asian Games, but was still required to serve a shorter period.

“The first day when we don’t know each other was a bit weird but soon we got to know each other. We spent every day together in one room, 10 people very close, working together, we helped each other so the time was fantastic. 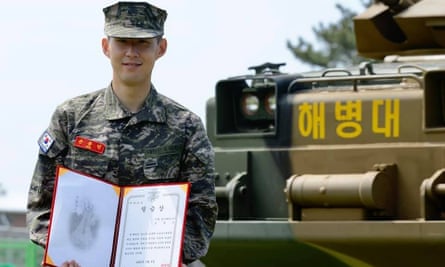 “Those guys, the first day and second day they couldn’t even speak to me but by the end they were joking with me and we were enjoying everyone together.”

Son also said he was is now raring to get going again, with the Premier League season set to resume on the 17 June. Tottenham will play Manchester United at home in their first match.

“I’m physically fine, I’m working really, really hard to be at my maximum level and I’m nearly there,” he said. “Now we can train together, we’re training more than the last two weeks and the players - Moussa (Sissoko) is back, Harry (Kane) is back, Stevie (Bergwijn) is back, everyone wants to play again and everyone is motivated.”

Bayer sports Director Feller on Havertz: We agreed that if possible, he could leave this summer
Roma midfielder under has agreed a 5-year contract with Napoli for 3.5 million euros a year
Baros will end his career at the end of the season
Pogba and Brunu were injured when they collided in training. The Bournemouth game is in question (Daily Mail)
Ex-President of Barca Gaspar: Messi has a few more years to be the best player in the world
Morata scored a double for Atletico for the first time since March last year
Rummenigge on Tiago: there have been no Contacts with Liverpool, but he wants something new
Source https://www.theguardian.com/football/2020/jun/03/tottenham-son-heung-min-south-korea-tough-military-service