It is unclear whether the BASK acronym will catch on. But on the night when José Mourinho started Gareth Bale, Dele Alli, Son Heung-min and Harry Kane in Tottenham colours for the first time, the club got the desired return.

It was Alli’s first Premier League start since the opening day of the season and he made the decisive contribution in the 19th minute, his flick from a Son cross going in off Tosin Adarabioyo for an own goal.

During the first half, when Spurs were thrusting and cohesive in attacking terms, it was possible to feel optimistic about their prospects for the final weeks of the season. Yet in the end they had a moment of good fortune to thank for a victory that fired their hopes of a top-four finish.

There was quite the turnaround in the second half, and a newly dominant Fulham thought they had scored a deserved equaliser just after the hour when Josh Maja, the winter window loanee, lashed a low shot past Hugo Lloris. To the hosts’ horror, VAR spotted that the ball had fallen to him after Davinson Sánchez’s hacked clearance came back off Mario Lemina’s arm. Lemina knew nothing about it.

For Fulham, this was the chance to climb above Newcastle and out of the bottom three. Although they lost for only the fifth time in 18 league games, there were positives for them to take.

It was the first of six games in 18 days for Spurs, though the truth is that they have been dealing with extreme fixture congestion for most of the season. Mourinho’s selection was influenced by the need to rotate, to manage tired bodies and minds, but he said that tactic was not behind the composition of the front four.

The manager said that “for Dele, it is more than a rotation” while Bale had made an irresistible case for inclusion over the previous five matches.

Mourinho had made it sound on Wednesday as though he might use Bale as a substitute, amid the need to be careful with him, but he said that the player would have an input in the decision.

Bale was involved in the opening goal but not as prominently as Alli. The Welshman drove a pass up to his teammate and, when Alli shifted it wide left to Son, Fulham could hear the alarm bells. Son teased Ola Aina before crossing low and hard and Alli, who had timed his run, flicked towards the far corner, the ball going in off the unfortunate Adarabioyo, who might have been conscious of Kane lurking behind him.

It was a swift response by Spurs to the frustration of blowing a gilt-edged opportunity moments earlier. Kane, of all players, was the culprit. Son teed him up with a glorious outside-of-the-boot cross and Kane had a clean look at the free header, centrally placed, just outside the six yard box. The effort was weak and straight at Alphonse Areola.

Fulham wanted to make inroads up the left flank, where Antonee Robinson pushed from full-back and Ruben Loftus-Cheek drifted to create overloads. They probed early on but had to wait until stoppage time for their first clear chance – and what a chance it was. Robinson’s stunning surge took him past four opponents and his cut-back was laid off by Maja only for Lemina to lift wastefully high. 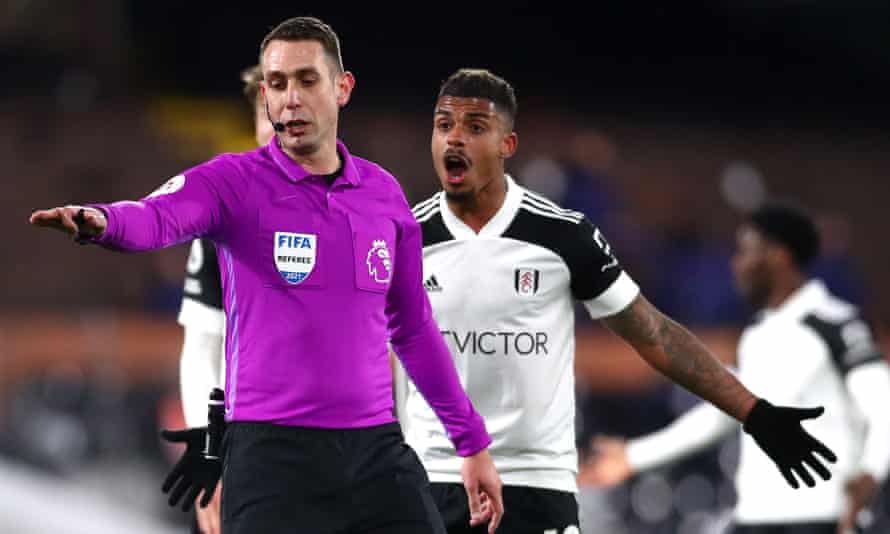 Spurs were stronger in the one-on-ones in the first-half, especially in the midfield, and dangerous when they won the ball high up. With Alli enjoying himself on the ball, always a bad sign for the opposition, Spurs might have had more before half-time. Kane wanted a penalty following an Aina challenge – there was not enough contact – while Son headed tamely after Alli had dropped a cross to the back post.

Fulham’s fixtures do not get any easier from here on – they still have to play the other five members of the so-called big six – and the second half felt hugely important for them. They began it with intent, pressing on to the front foot, bringing a tempo to worry Spurs and the VAR intervention was a heartbreaker.

Lloris had done well to save from Lemina after a cut-back from Ivan
Cavaleiro but when Fulham pushed again, Sánchez’s poor clearance broke off Lemina for Maja, who rammed low into the bottom corner. It was a lovely finish but to no avail.

Joachim Anderson had extended Lloris with a header at the start of the second period while Adarabioyo thumped another one at the goalkeeper but Fulham could not react to the blow of the disallowed goal.

Mourinho hooked Alli and Bale, introducing Moussa Sissoko and Lucas Moura for greater solidity while his other change deliovered more of the same; Érik Lamela for Tanguy Ndombele. One goal was enough for him, although Kane almost got a second, Areola blocking bravely from him after a pass from Lamela.