FURIOUS rebel Tories tonight warned they may vote down Boris Johnson's second national lockdown as "it's a bigger decision than going to war".

Backbench anger boiled over after the PM confirmed a new four-week shutdown in England from Thursday to stem the spread of the virus.

In a dire assessment at tonight's Downing Street press conference, Brits were warned deaths in the second wave could be twice as bad as in the first, with thousands of deaths a day.

Hospitals would run out of capacity within weeks and doctors forced to choose between "who would live and who would die", the PM said.

Mr Johnson had previously described a new national lockdown as the "nuclear option", but the new restrictions will hit England until December 2.

The Commons will vote on the new restrictions this week before they come into force, with some MPs hinting they may vote against them.

"This is a bigger decision than going to war from the point of view of many people in the country.

"We need to really be very clear about what our exit strategy is."

He warned his vote was not guaranteed - and many of his colleagues were sceptical too.

Shambolic. Rudderless ramblings. Constituents getting in touch furious or in tears

Following confirmation of a lockdown to tackle the spread of the virus, one Tory MP raged to Times Radio's Matt Chorley: “Shambolic. Rudderless ramblings.

"Constituents getting in touch furious or in tears.”

Another MP branded the PM's lockdown as "grim grim grim”, while another said: "I think it could be his Suez”.

Tory MP Desmond Swayne told MailOnline: ‘I don’t doubt it is a difficult decision, but that doesn’t alter it being the wrong decision.

"The things that it does to our economy our health and everything else is worse than the disease they are combating."

Andrew Bridgen suggested he too would not support the government's new restrictions.

He said: "These are huge decisions that the government has to make with enormous economic and political ramifications.

"The Sage so-called experts won’t be held to account for the correctness of their decisions at the next general elections. We will."

But other MPs regarded as lockdown sceptics sympathised with the PM.

The Sage so-called experts won’t be held to account for the correctness of their decisions at the next general elections. We will.

"We will all need to think forward several weeks to the circumstances we could face on coronavirus, on health more widely and for people's livelihoods."

It comes as Britain today passed one million Covid cases after 21,915 more people positive for the bug.

Another 326 deaths have been recorded, meaning 46,555 have now died of coronavirus in the UK.

Under the tough new lockdown rules unveiled tonight, all non-essential shops must close as England goes back into a national lockdown for a month.

Pubs and restaurants will shut but will be allowed to do takeaways and deliveries.

Schools, colleges and universities will all remain open and unlimited exercise will be allowed, but holidays abroad are to be banned.

Overnight stays will also be prohibited, with a nationwide ban on people mixing indoor, and all travel apart from work discouraged.

But the furlough scheme will be extended with 80 per cent of pay.

Giving a gloomy outlook going into winter, Mr Johnson said: "In this country alas as across much of Europe the virus is spreading even faster than the reasonable worst case scenario of our scientific advisers

"A peak of mortality alas far bigger than the one we saw in April." 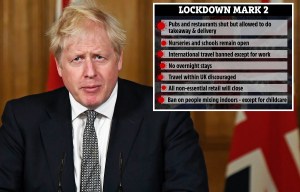 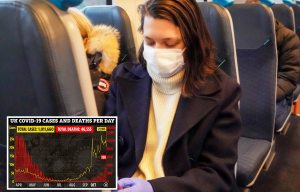 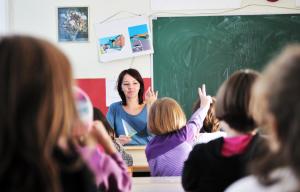 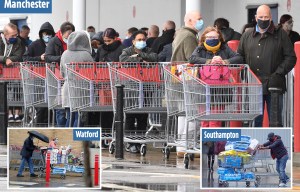 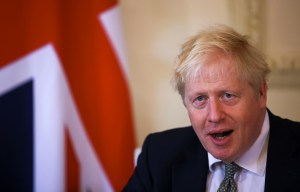 Boris Johnson lockdown announcement: What did the PM say in his speech today?

He attacked the PM, claiming the shutdown should have been brought in "weeks ago".

But he said Labour will back the Government in a Commons vote on the new lockdown, saying "these measures are necessary",

Mayor of London Sadiq Khan said he was "furious" that the Government has "dithered and delayed yet again".

Red bull tore up Lokomotiv with a perfect variety of attacks. The stricken Loco didn't know what to do
The Spanish super Cup may not take place in Saudi Arabia, but in Spain
Goals by Zobnin, Kuzyaev and Skopintsev claim the title of best in November
Romelu Lukaku: one and a Half years at Inter are the best in my career
Bulykin on Loko's chances of reaching the Europa League play-offs: it Will be very difficult to do anything
Joao Felix: Atletico are missing Suarez and Costa
Loko didn't know what to do when Red Bull scored first. Naumov about 1:3
Source https://www.thesun.co.uk/news/13075475/tories-vote-down-pms-four-week-national-lockdown/