Cumbia Police have attended a "serious incident" in Ambleside "involving a tree falling onto a man."

They added: "The man sadly died at the scene.

"The tree remains dangerous and the public is asked to avoid the area until the tree has been made safe."

Amber warnings have been issued for snow and ice

The Met Office has kept in place amber weather warnings for much of the UK, with yellow warnings for snow and ice across parts of the north east of England and Scotland.

Predictions of snow and ice cover much of the north of Scotland, and stretch down past Newcastle-upon-Tyne, according to the forecast.

This follows the knocking out of power for many residents in this area of England, the Northern Powergrid has reported. 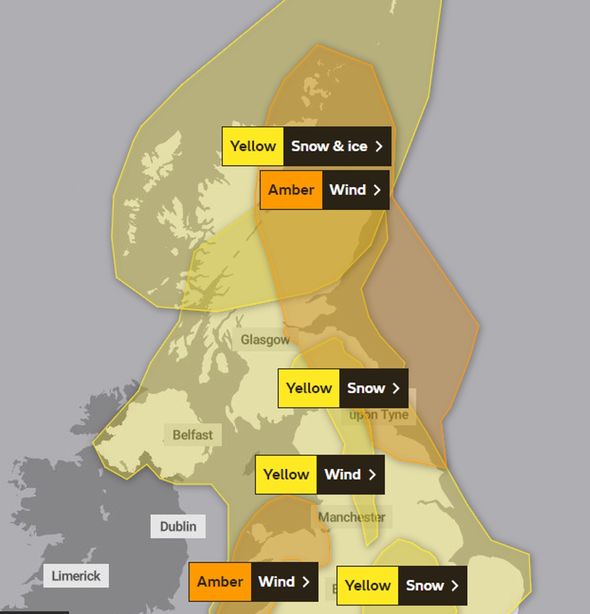 Amber and yellow warnings are in force (Image: Met Office)

Storm Arwen has seen winds of almost 100mph recorded across the UK.

The Met Office said that wind speeds hit 98mph in Northumberland, and 87mph in County Down.

The storm has left one person dead and buildings damaged. 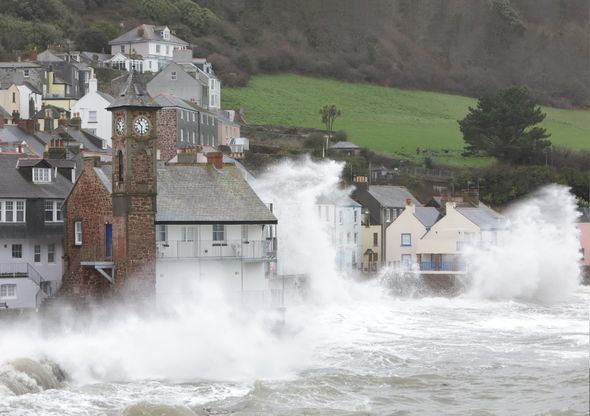 The footage shared on Twitter, taken from the window seat of an arriving aircraft, shows the plane struggling to remain level as it comes into land.

Passengers on the aircraft can be heard shrieking as the plane lurches violently.

No trains on the London North Easter Railway (LNER) are expected to run north of Newcastle this morning amid disruption from storm Arwen.

In an update on Twitter, LNER advised customers "not to travel".

They said: "#LNERUpdate Due to continuing severe weather from #StormArwen, no trains will run north of #Newcastle throughout Saturday 27 November.

"There will be significant disruption across our entire route. Please DO NOT TRAVEL."

Man killed by Storm Arwen named as 'much loved' headteacher

The first person to be killed by Storm Arwen is reported to be a "much loved" headteacher and father-of-four.

The man, named as Francis Lagan, was killed in a tragic incident in Northern Ireland yesterday.

According to The Mirror, Mr Lagan was travelling with his wife and children when tempestuous winds uprooted a tree that struck his vehicle.

In a statement, St Mary's school said: "It is with great pain and sadness this evening that I have to inform you of the untimely death of our much loved principal Mr Lagan.

"May his gentle soul rest in peace."

The M62 Eastbound is reportedly blocked as around 120 HGVs remain stuck in snow, police have warned.

In a statement on Twitter, North West Motorway Police advised the road was being closed between Junctions 21 and 22.

In as subsequent update, the force said: "This is currently the scene on M62 at junction 22 eastbound, full closure is on at the present , snow ploughs have been deployed."

This is currently the scene on M62 at junction 22 eastbound, full closure is on at the present , snow ploughs have been deployed/ pic.twitter.com/CU0tvM6yqO

The Met Office has now downgraded a previously issued red warning following hours of tempestuous winds across the country.

In a statement on Twitter, the weather service advised amber and yellow warning remain in place and have advised motorists to only travel when absolutely necessary.

Severn Bridge closed in both directions

The Severn Bridge has temorarily been closed in both directions as forecfull winds brought by the storm lash South West Wales and the Severn Estuary.

Wind speeds have been recorded in excess of 80mph forcing National Highways South East to close the Severn Bridge over the estuary between J1 and J2.

Motorists have been advised to use the M4 Prince of Wales bridge as an alternative crossing.

Around 80,000 people in Scotland are reportedly without power as Storm Arwen continues to wreak havoc on infrastructure.

According to Scottish and Southern Electricity Network, thousands of Scottish homes have been without power since around 10pm on Friday 26 November.

The power outages come as the Met office warns a Red Warning remains in place across coastal eastern Scotland and northeast England.

In a statement on Twitter, the Met office warned: "Dangerous conditions are expected, only travel if absolutely essential."

The Met Office has said Storm Arwen will continue to bringing strong winds across many parts of the UK during Saturday. They said: "The cold air combined with the strong winds will give a very cold day right across the country."

Here are the details \ud83d\udc47 pic.twitter.com/p3nRYJQCdV

Traffic Scotland have reported a number of issues including the A96 between Elgin and Forres being blocked by fallen trees, the A90 being closed after Brechin because of "multiple incidents on the carriageway", an overturned HGV on the A90 near Bogbrae, the Tyne Bridge on the A1 in East Lothian closed in both directions as a precaution and snow gates on the A939 at the Lecht and on the A93 at Glenshee in Aberdeenshire also closed.

Wowser, just got home rather late. Tree down on the A96 so diverted via Kinloss but tree now down on Burghead road. Back to Roseisle to go via Duffus only to find a tree just down there, but roads maintenance guys ahead of me with JCB cleared it right there\u2026 don\u2019t go outside. \ud83e\udd76

Tyne and Wear Metro service has been distrupted.

They said: "We have no trains Shiremoor and Wallsend in both directions. This is due to an obstruction on the line. Arriva bus services 51, 53 and 54 are accepting Metro tickets in the affected area. We are working to arrange more ticket acceptance. Sorry for any inconvenience caused."

Due to a tree branch on the line at Wallsend and also at Shiremoor we have a service suspension between Wallsend and Shiremoor. We are currently working to remove these objects and also to arrange ticket acceptance on local buses. Please stand by for further information.

The UK Health Security Agency (UKHSA) has issued a cold weather alert and is urging people to "stay warm and look out for those most at risk from the effects of cold weather."

Agostinho Sousa, a consultant in public health medicine at UKHSA, said: "Cold weather can have a serious impact on health, particularly for older people and those with heart and lung problems, as it increases the risks of heart attacks, strokes and chest infections."

Mr Sousa reminded people how important it is to "keep checking on older neighbours or relatives, especially those living alone or those who have serious illness."

He urged people to "make a call, or a socially-distanced doorstep visit if they live close by, to remind them to heat their home to at least 18 Celsius. It’s also helpful to check they have enough food and drinks and any medicines they need."

Storm Arwen is producing blizzards in the north Pennines, watch the footage below.

Due to the extreme weather many train services have halted services or are running delayed. We will be bringing you all of the latest updates.

There are currently no trains running between Newcastle and Scotland. The line will reopen for the start of service on Saturday, but trains will run to a 50mph speed limit.

- Some of its services are being cancelled.

- Trains have been withdrawn between Aberdeen and Inverness and between Perth and Aberdeen. Also on the Far North Line between Inverness and Wick.

- No services north of Newcastle

- The route north of Berwick-upon-Tweed from 17:00 GMT, and there could be further closures elsewhere on the route.

- Due to the severe weather forecast they expect services to be significantly disrupted. You are unable to travel on routes between Sunderland and London Kings Cross.

Guernsey Harbour has urged Boatowners, when safe to do so, to check their vessels. Think about securing hatches, mooring ropes, fenders, vessel coverings, and set bilge pumps to automatic. If you are in trouble, dial 999 and ask for 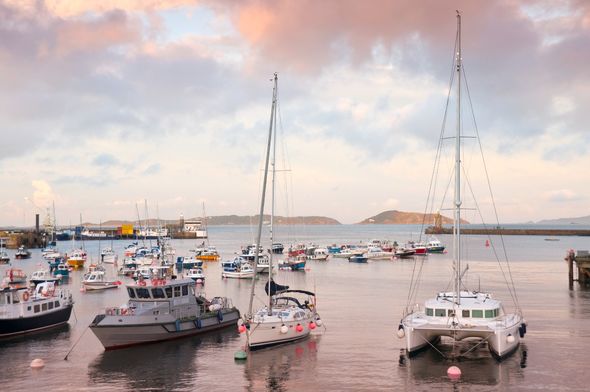 Due to high gusts of wind in Loughborough tomorrow morning, Loughborough Market will be running at a reduce sized tomorrow with only perishable goods on sale. 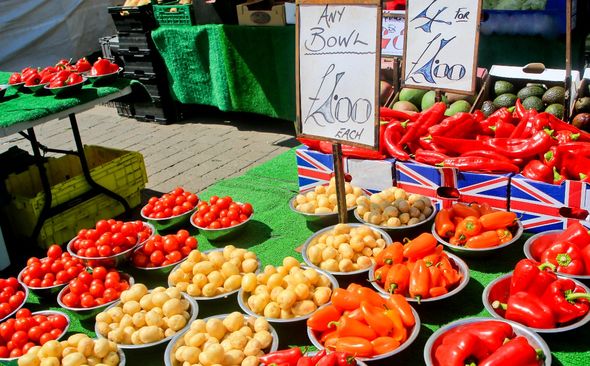 Loughborough Market will be running at a reduce sized tomorrow (Image: Getty)

I'm A Celebrity ... Get Me Out Of Here! will not be live due to Storm Arwen

Tonight's episode of I'm A Celebrity ... Get Me Out Of Here! will be broadcast as a pre-recorded show rather than live due to the severe weather forecast caused by Storm Arwen.

A show statement said: "Ant & Dec will record their links early evening and these will be played out during tonight's show. Our celebrities will remain inside the castle, which is secure, and we have contingencies in place to cover all weather scenarios to ensure the safety of our cast and crew."

Scotland's First Minister, Nicola Sturgeon, has urged people living in areas covered by the red warning not to travel.

In a tweet she said: "If you live in one of the areas across the North & East of Scotland covered by the Met Office Red weather warning, advice is DO NOT TRAVEL as conditions pose a potential risk to life."

Deputy first minister John Swinney also said travel should not be attempted "under any circumstances".

He said: "The decision by the Met Office to issue a rare red weather warning for strong winds signals a potentially damaging and dangerous risk to life in some areas of Scotland.

"The Scottish government is in close contact with local authorities and the emergency services to ensure people in the affected areas receive the latest information, advice and support where needed.”

\u270bif you live in one of the areas across the North & East of Scotland covered by the @metoffice RED weather warning (in force now until 2am tomorrow) @scotgov advice is DO NOT TRAVEL as conditions pose a potential risk to life. https://t.co/zw03XRBVPE

Good afternoon from London. I’m Rachel Hagan, I’ll be bringing you all the latest developments on Storm Arwen for the next few hours. Please feel free to get in touch with me as I work if you have a story or tips to share! Your thoughts are always welcome.

Another delay for ex-deep-sea treasure hunter stuck in jail

Tragedy as boy, 4, killed after off-road motorbike crashes into lamppost in County Durham

Roads where drivers could face delays over the next two weeks