Song Heung-min hit a memorable four to inspire Tottenham to a 5-2 victory over Southampton.

Harry Kane thought he’d given Spurs the lead with an excellent volley, but Son was offside in the build-up, while Danny Ings also saw a goal ruled out for handball.

But Ings’ brilliant touch and angled finish did break the deadlock, only for Son to hit back just before half-time.

The Korean’s ruthless streak continued just after the restart, polishing off a fine Kane through ball, before two more equally clinical finishes.

Kane finally got his goal late on from close range before Ings pulled one back from the spot. Here are the player ratings from St Mary’s. 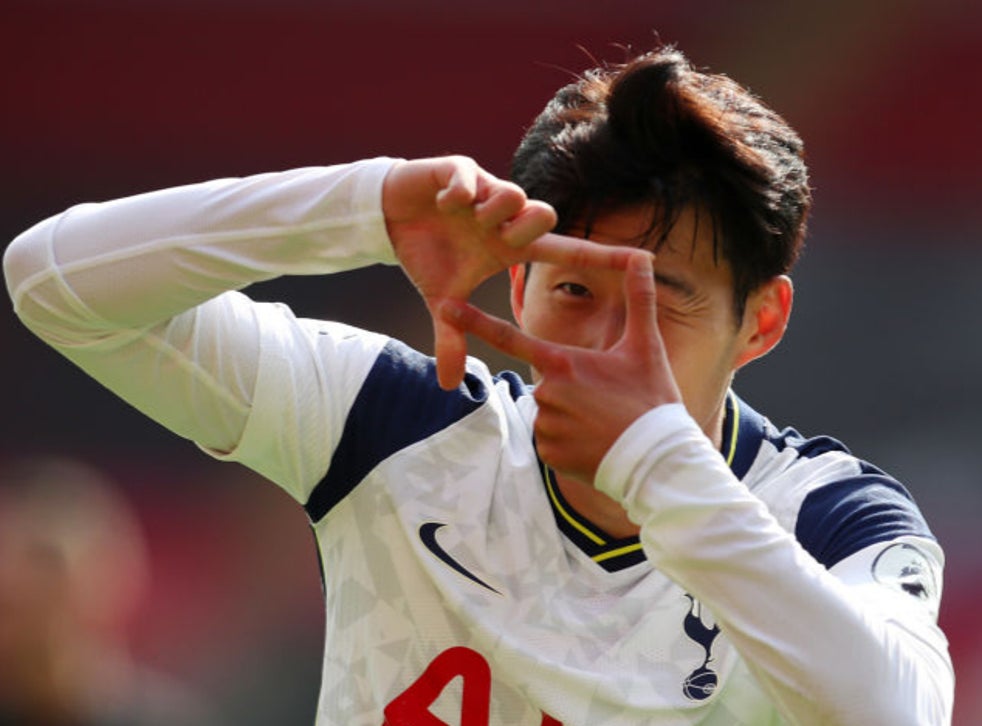 Son celebrates his second vs Southampton(Getty)

Alex McCarthy - 4. Couldn’t do much about the goals but didn’t have lots to do apart from them.

Kyle Walker-Peters - 5. Got forward well, clearly started in the frame of mind to show his old side what they had given up, but faded as an offensive force later and never got close to Son going the other way.

Jan Bednarek - 4. Not one of his better games, didn’t really stop Kane whenever one-on-one, wasted a few balls passed out from deep. Kept stepping up and allowing those constant runs behind.

Jack Stephens - 4. Stepped out of the defensive line on more than one of the goals, leaving Saints exposed for runs through the centre.

Ryan Bertrand - 4. Good on the ball, won the battle against Lamela. Dreadful defensively with switches of play and runs in behind.

Stuart Armstrong - 6. A fairly quiet game for him and subbed partway through the second half.

Oriol Romeu - 7. Battled well and was one of the more dominant midfielders, but also got booked early on and Saints had to sub him after the break to avoid going down to 10.

James Ward-Prowse - 6. Neat on the ball as ever and hard-working, but not able to find telling end-product in the final third.

Moussa Djenepo - 7. Signs of the superb player he can be. Needs to be more consistent week-to-week and even across 90 minutes, but he’s lightning on the ball and has such great feet in tight spaces.

Che Adams - 7. Got into dangerous positions with great regularity. Movement and work rate was a 10/10 performance, but finishing was about a four.

Danny Ings - 9. Another genuinely excellent display from him.Superb first touch and finish for the goal, but also created openings for others, ran the channels, chased down defenders and produced an all-round forward’s display.

Hugo Lloris - 8. Made some fantastic saves when the game was close, most notably from Adams’ close-range powerful strike.

Eric Dier - 6. Not the best in terms of shutting out the two forwards. Wasn’t too-well protected either, mind.

Davinson Sanchez - 5. Looked sluggish for the first hour, not really in tune with the rest of the back line.

Ben Davies - 6. Must be fearing for his place now after Sergio Reguilon’s arrival. Fairly solid defensively, didn’t offer too much on the ball.

Pierre-Emile Hojbjerg - 6. Started poorly but got better as Spurs started to exploit Saints’ back line.

Lucas Moura - 6. Not his best outing. Didn’t create too much, subbed for Lamela.

Tanguy Ndombele - 5. A familiar performance of good touches, not much tracking back and being subbed at half-time.

Son Heung-min - 10. Is there a more clinical player in one-on-one situations? Unbelievably cool and consistent, Spurs’ best player in these early games of the season. Tremendous movement and a four-goal haul to remember.

Harry Kane - 9. England striker, Spurs quarter-back. Teed up so many chances, claimed four assists and scored one himself. Exploited the spaces time after time by dropping deep, turning and firing a pass through for his partner’s runs.

Ozil provided 1,400 school children with free Lunches by supporting Rashford
Dmitry Sennikov: Lokomotiv will have opportunities to score against Bayern. Its defense is not perfect
De Bruyne and Villas-Boas have known each other for 10 years: they barely missed each other at Chelsea, Andre's assistant asked Kevin for a t-shirt
Andrea Pirlo: Messi is still on top. With such players, we must hope that they do not have the best day
The figures of Robert Lewandowski, which frightens not only the locomotive
Who will be the top scorer in the Champions League?
La Liga President on the departure of Ronaldo and Neymar: it is better to leave because of taxes than because of anything else
Source https://www.independent.co.uk/sport/football/premier-league/southampton-vs-tottenham-player-ratings-son-kane-ings-result-final-score-highlights-b507114.html