The UK is more likely to have a third wave of Covid in the autumn than the summer, a government scientist has claimed.

Under Boris Johnson’s ‘roadmap’ out of lockdown, all remaining curbs are set to be lifted no earlier than June 21, depending on the state of the country’s outbreak.

Some of the SPI-M’s models predict a huge surge in cases which could be as big as January’s peak, when daily deaths regularly exceeded 1,000.

But critics say the predictions haven’t taken into account that the spread of most respiratory viruses declines over summer, or the success of the UK’s vaccine rollout.

One senior government scientist said the currently low infection rate should carry on for at least another five months and said there are some ‘big caveats’ on the modelling.

They told the Telegraph: ‘A lot depends on seasonality as well so it may well be that it’s more like autumn than summer.

‘Is that going to be affected by what’s happening in Europe? Well, possibly in the sense that if you get lots of travel coming back and forth that might increase it.

‘I think that the expectation is that there will be further waves, but they won’t be as big as the ones that we’ve had, unless things go badly wrong.’

Last week professor of public health at the University of Edinburgh, Linda Bauld, said the UK is ‘unlikely’ to experience the sort of third wave currently sweeping mainland Europe.

She told Times Radio: ‘I think we are in a very different position for two main reasons.

‘The first one is that they are dealing with the B117 variant which unfortunately we exported to them and caused us huge challenges.

‘More importantly, 11.6% of citizens in the EU on average have been given their first dose of the vaccine – that’s all people, not just all adults – compared to over 40% of people in the UK, so you can see they are in a different place than we are.’

It comes as lockdown restrictions are eased across England, with non-essential shops, hairdressers and indoor leisure centres opening today – as well as pubs, restaurants and bars for outdoor drinks and food. 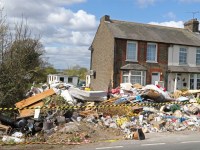 However, social mixing indoors will remain heavily restricted, with around two in five adults yet to receive their first dose of a vaccine and the vast majority waiting for their second.

Prime Minister Boris Johnson said: ‘I’m sure it will be a huge relief for those business owners who have been closed for so long, and for everyone else it’s a chance to get back to doing some of the things we love and have missed.

‘I urge everyone to continue to behave responsibly and remember ‘hands, face, space and fresh air’ to suppress Covid as we push on with our vaccination programme.’