RYAN Thomas has admitted travelling to Manchester to see his daughter Scarlett has put strain on his relationship with Lucy Mecklenburgh.

The former Corrie star and fiancé Lucy live in Essex with their 11-month-old son called Roman, while Scarlett is based in Manchester with her mum Tina O'Brien.

Speaking on his Mancs on the Mic podcast with brothers Scott and Adam, he explained: "I know I’ve got Scarlett [who] I have to keep going back and forward for… That puts a strain on our relationship because I’m not with her [Lucy] because I’ve gotta get back for Scarlett.

"There is that trying to find a mix of making both work and working out where you’re going to end.

"I think eventually I’d like to be in Manchester with both my kids, but at the moment it’s having that help at hand in London it’s just easier, but I think eventually I would love to be back where I started with all my brothers and all our kids.

Lucy recently gave fans a glimpse inside the new family home Ryan bought for her without her even seeing it.

The fitness enthusiast called her fiancé a brave man after he purchased the house on their behalf.

She wrote: "New house, new project, new memories to be made 💛🏡 @ryanthomas84 bought our new Manchester home without me viewing it 🤦🏽‍♀️ he is a very brave man hahahah!!!

"I’ll be posting the full renovation process on @lucymeckinteriors 🙌💛."

The couple explored the new pad today along with Ryan's daughter Scarlett.

And while it needs a lot of TLC, Lucy was thrilled with the project in front of them.

The spacious home has a huge basement with lots of potential, while the rooms are effectively blank canvases for their creative juices to flow.

Large bedrooms come complete with built-in wardrobes and chandeliers, while both the bathroom and kitchen are light and airy.

Lucy shared some of her plans, writing: "We are planning to start by ripping out all the built in wardrobes...

"New carpets and painting, But living in it like that before we decide on any big changes like extensions, loft conversions, new kitchen, knocking through walls etc.

"I think it's helpful to live in the house to get a feel for it & then make a plan of action! 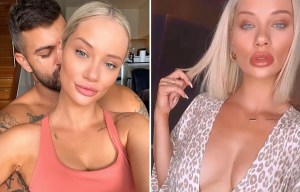 "I didn't with mine and not having a utility room is my biggest regret."

The Essex "mini mansion" boasts a marble bathroom, modern extended kitchen and a room for her designer shoe collection.

Holly Willoughby says Rochelle Humes will replace her on This Morning

Boy, 3, mauled by dog in playground and left with ‘flesh hanging off arm’