COVID-19 cases, hospitalisations and deaths have been rising in the UK, pressurising a health service that’s already working hard to treat the backlog of non-COVID patients that have accumulated since March 2020.

While some modellers suggest that cases have peaked and are now set to fall, the overall number of new infections isn’t the only trend to pay attention to. More cases in older age groups and rising hospitalisations are causes for concern, with both possibly driven by two other worrying trends: waning immunity and the vaccine booster programme rolling out too slowly.

The government is taking notice, holding a COVID press conference in response to the recent rise in cases, but is yet to change course. Its strategy for controlling COVID currently still depends mainly on vaccination.

It is resisting calls for the stricter “plan B” control measures, outlined in its COVID winter plan, to be implemented now. These measures include, in certain situations, introducing vaccine certificates and reintroducing mandatory face coverings, together with suggesting that people work from home.

But looking closely at the current data, the plan B measures – or even other, more effective steps – seem inevitable in the coming weeks and months.

Vulnerable people are getting COVID

In the second half of October, reported new cases of COVID surpassed 50,000 a day for the first time since July. However, the current situation is substantially more concerning than in July. Back then, cases were only high in the young. Now cases have risen substantially in the older half of the population.

The case rate among the over-60s is the highest it’s been since late January. We know this is especially important, because despite making up less than a quarter of the population, the over-60s make up more than half of all COVID hospital admissions. Rising cases in this age group disproportionately leads to people getting severely ill with COVID and hospitals coming under pressure. 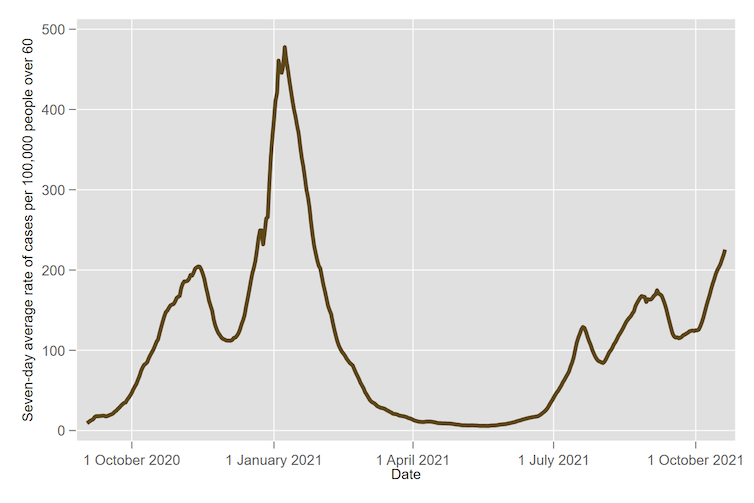 The number of COVID patients in hospital in England reached 6,801 on October 25, the highest figure since mid-March. It’s worth noting that a year ago in October 2020, the government called a national lockdown when hospital occupancy reached approximately 10,000. At the current trajectory, it seems likely we’ll reach this milestone sooner or later this winter. If we’re to avoid it, we don’t just need cases to come down, but cases in the older age groups to fall in particular. 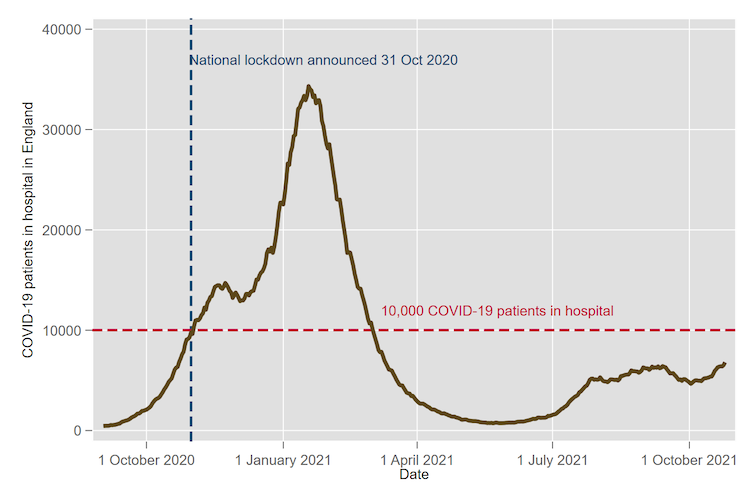 Due to vaccination, we won’t see hospital occupancy shoot up as rapidly as it did in October 2020. So even if we do reach 10,000 COVID patients in hospital, a lockdown is unlikely. Admissions increasing more slowly means there’s far less risk of the NHS suddenly becoming overwhelmed, which is what in the past necessitated drastic lockdown measures being introduced. However, it is likely we will see strain on the NHS rise to a level that justifies more action.

Pressures on the NHS are already very serious, especially in emergency care, where A&E waiting times are the worst since records began. Around 25% of people attending A&E aren’t seen within the target time of four hours, and people are routinely waiting 45 minutes for an emergency ambulance. This pressure is not primarily due to COVID, but the return of normal levels of attendance at A&E, together with increased severity of patients, staffing issues and infection control measures making life harder in A&E departments.

The government therefore is right to be pursuing a policy of booster vaccinations for over-50s. Older groups in the population are highly vaccinated – over 90% of 60- to 69-year-olds are double vaccinated and over 95% of over-70s – but the fact that we’re seeing increased cases and hospitalisations in this older cohort suggests vaccine-based immunity is waning. Emerging research also suggests this is the case (though its findings still need to be formally reviewed by other scientists).

Prompt deployment of these extra vaccines should reduce cases and hospitalisations substantially. Data released by Pfizer – whose vaccine is the booster of choice in the UK – suggests that a third dose restores immunity to highly protective levels (though these findings are also still awaiting review).

The problem is that the booster programme appears to be in getting third doses to people as they become eligible six months after their second. We also don’t know if the take-up of boosters will be as high as for the initial two doses. If it’s not, many people may end up vulnerable to hospitalisation and death from COVID this winter.

The health secretary, Sajid Javid, has conceded that the government’s plan B may be necessary if pressures on the NHS become unsustainable, but the components of this plan seem quite weak compared to restrictions that were used earlier this year. Would these measures bring down transmission and reduce cases – and therefore hospitalisations – in older, more vulnerable age groups? Possibly not. The Cabinet Office’s COVID-19 Taskforce estimates that the impact of these measures on transmission might only be “moderate”.

Some experts have pointed to less invasive measures that could also be introduced. Improving the targeting of testing through revising the list of symptoms that allow people to book a PCR test, or even dropping large-scale PCR testing in favour of cheaper rapid lateral flow tests, might make finding and isolating cases quicker. However, such changes remain unlikely for now. This means plan B, if implemented, may struggle to achieve its goals of relieving pressure on the NHS.

Nevertheless, further measures to limit the spread of the virus, such as those in plan B, seem inevitable unless progress can be made on reducing cases in older age groups. If cases among these groups remain high, more drastic restrictions – such as imposing social distancing in hospitality venues at some point this winter – remain a strong possibility.

This article is republished from The Conversation under a Creative Commons license. Read the original article.