Real Madrid, Barcelona and Juventus, the three clubs still involved in the proposed European Super League, denounced on Saturday the “intolerable” pressures and “threats” put on them by Uefa to drop the project.

Uefa said on Friday that the three clubs will face sanctions and European football’’s ruling body has started disciplinary proceedings against them. Nine other clubs, including six English Premier League teams, backed out of the plan and have signed a “Club Commitment Declaration” including a series of reintegration steps.

“The founding clubs have suffered, and continue to suffer, unacceptable third-party pressures, threats, and offences to abandon the project,” Real Madrid, Barcelona and Juventus said in a joint statement. “And therefore desist from their right and duty to provide solutions to the football ecosystem via concrete proposals and constructive dialogue.

“This is intolerable under the rule of law and tribunals have already ruled in favour of the Super League proposal, ordering Fifa and Uefa to, either directly or through their affiliated bodies, refrain from taking any action which may hinder this initiative in any way while court proceedings are pending.”

The nine clubs who pulled out of the Super League and are back in the Uefa fold have agreed to “take all steps within their power” to end their involvement in the breakaway league and have been handed financial punishments by Uefa and have agreed to make a combined €15m goodwill contribution to benefit youth and grassroots soccer across Europe. But Juve, Real and Barça expressed regret about this and a desire to dig in and pursue ESL plans.

“We regret to see that our friends and founding partners of the Super League project have now found themselves in such an inconsistent and contradictory position when signing a number of commitments to Uefa,” their statement said.

“We reiterate that, to honour our history, to comply with our obligations towards our stakeholders and fans, for the good of football and for the financial sustainability of the sector, we have the duty to act in a responsible manner and persevere in the pursuit of adequate solutions, despite the unacceptable and ongoing pressures and threats received from Uefa.

The Super League claimed it would increase revenue for the top clubs in Europe and allow them to distribute more money to the rest of the game. Uefa, other teams and fan organisations, however, said the league would only boost the power and wealth of elite clubs. 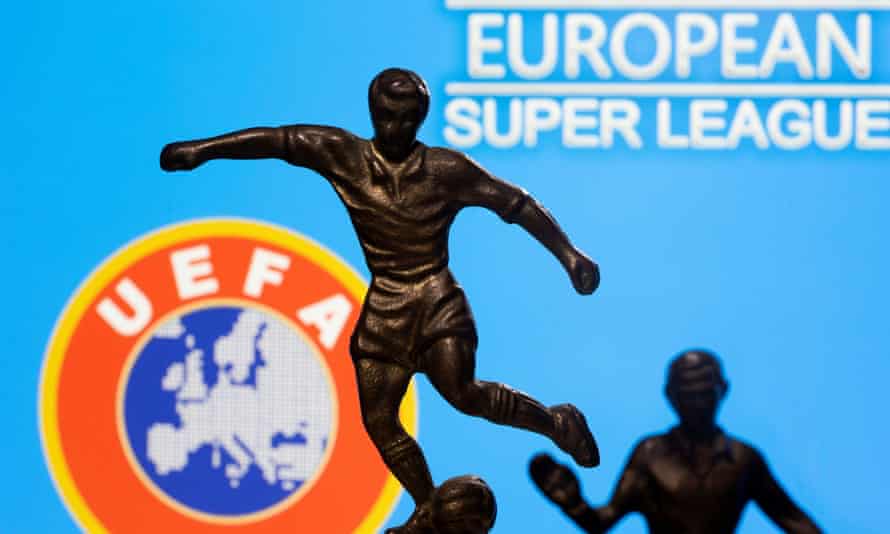 The nine clubs who pulled out of the Super League and are back in the Uefa fold have agreed to ‘take all steps within their power’ to end their involvement in the breakaway league. Photograph: Dado Ruvić/Reuters

Juve, Real and Barça said they were ready to reconsider the proposed approach of the breakaway project following the backlash, but said it would be “highly irresponsible” for them to abandon the project.

“We are fully aware of the diversity of reactions to the Super League initiative and, consequently, of the need to reflect on the reasons for some of them,” their statement added.

“We are ready to reconsider the proposed approach, as necessary. However, we would be highly irresponsible if, being aware of the needs and systemic crisis in the football sector... we abandoned such mission to provide effective and sustainable answers to the existential questions that threaten the football industry.”