CONOR McGREGOR was sensationally stopped by Dustin Poirier - and it left one punter with a £400,000 win.

The Irish fighter, making his grand return to the octagon, was floored by a flurry of punches before referee Herb Dean stepped in.

Huge bets on both fighters in #UFC257 main event.

One UFC fan had bet $200,000 on Poirier to win at decimal odds of +2.7 odds - netting him near half-a-million return converted into Great British Pounds.

McGregor was the heavy favourite going into the fight against a man he had beaten by first-round TKO in 2014.

But Poirier decided to upset those odds - and in scintillating style.

Fan favourite Poirier looked to hinder the Irishman's movement with leg and calf kicks, which seemed to be taking their toll.

McGregor soon wised up to the tactic and began catching the kicks and looking to land counters.

But the Dubliner's movement was well and truly compromised, which led to eventually Poirier cornering against the fence.

The pride of Louisiana unleashed a hellacious flurry and rocked the former featherweight and lightweight champion with a big left hand.

The former interim lightweight champion didn't let up and landed a big right hook that sat McGregor down and closed the shot with some ground and pound. 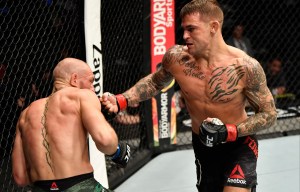 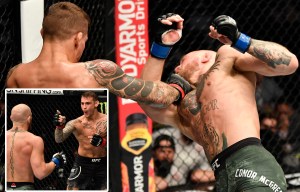 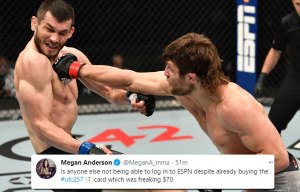