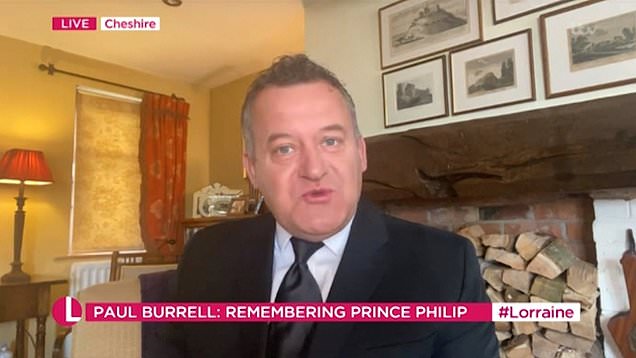 Paul Burrell has described the Duke of Edinburgh as ‘no-nonsense’ but added he’s ‘always been attentive’ to the Queen.

Princess Diana’s former butler Burrell said Prince Philip, who died aged 99 on Friday, had left ‘grown men in tears’ but acted as ‘a gentleman’ when it came to his wife.

He added: ‘And he at times frightened the living daylights out of me.

‘He was very aggressive at times and very vocal, I’ve seen grown men come out of his room in tears.’

Burrel said the duke had run the House of Windsor behind the scenes and the Queen had ‘lost the captain of her ship’.

He said: ‘He didn’t suffer fools, he didn’t like the fuss.

‘He didn’t like all the pomp and pageantry around the Queen but put up with it, because that’s what she did.

‘Prince Philip was always attentive of the Queen, he was a gentleman with the Queen, he would mix her favourite martini in her sitting room at night and take her a glass through while she was dressing.

‘They spent a great deal of time together.’

Burrell recalled how the Queen had ‘remained calm’ around Prince Philip when he got mad her dogs were blocking a doorway.

He said she looked at him and said, ‘but darling they’re so collectable’.

Prince Philip will be buried next Saturday, following a period of national mourning.

But under lockdown rules, only a maximum of 30 people can attend the historic occasion inside St George’s Chapel, Windsor Castle.

He said that ‘in due course’ the House of Commons and the country would consider a ‘suitable memorial’ to Philip.

Labour leader Sir Keir Starmer added: ‘Britain will not be the same in his absence.’