Prince Philip, 99, was transferred to another London hospital this morning as he continues to be treated for an infection, Buckingham Palace announced today. The news of his extended hospital stay has caused a "significant shift in the mood" at Windsor Castle, where the Queen is currently staying, according to royal insiders.

A royal source said: “The staff and all the Royal Family are united in their prayers for the Duke.

“There has been an almighty and collective effort to keep him and the Queen safe during the coronavirus crisis over the past 11 months but there was a significant shift in the mood when everyone started finding out the Duke wasn’t coming home any time soon.

"Everyone’s thoughts are now firmly centred on him pulling through this illness.”

Earlier on Monday, it was announced the Duke of Edinburgh had been moved to a second hospital where doctors will continue to treat him for an infection. 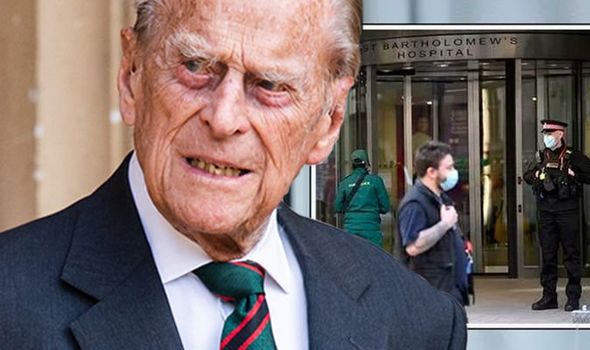 Philip is now being treated at St Bartholomew's Hospital, located near St Paul's Cathedral in London.

The hospital is "one of the country’s leading specialist cardiac centres, offering state-of-the-art treatments for the full range of heart conditions", according to its website.

He is believed to have been taken by ambulance at about 11am today.

Staff were pictured holding up umbrellas to ensure the Duke’s privacy as he was carried by stretcher to the waiting vehicle.

Buckingham Palace said in a statement: "The Duke of Edinburgh was today transferred from King Edward VII’s Hospital to St Bartholomew’s Hospital where doctors will continue to treat him for an infection, as well as undertake testing and observation for a pre-existing heart condition."

But the Palace has not detailed what kind of infection the Duke is suffering from.

The palace statement added: "The Duke remains comfortable and is responding to treatment but is expected to remain in hospital until at least the end of the week."

The Queen's husband was first admitted to King Edward VII Hospital on February 16, as revealed by Buckingham Palace on February 17.

At the time, his representative said the Duke had been admitted for "observation and rest" after saying he was "feeling unwell".

Karl-Heinz Rummenigge: Bayern do not participate in the Super League, we stand in solidarity with the Bundesliga. The Champions League is the best club competition in the world
Premier League: 14 clubs have rejected plans to create a Super League. We are considering all measures to prevent this
Henderson called an urgent meeting of the captains of all the clubs in the Premier League. He wants to develop a unified position on the Super League
Nasser Al-Khelaifi: PSG believe that football is a sport for everyone. We will continue to work with UEFA
Lineker on the idea of Perez to reduce the time of matches: Let's make halves of 5 minutes-and a 45-minute break for advertising
Is the threat of top clubs and top players being banned real? Connecting game theory!
55 member associations of UEFA unanimously approved the declaration against the Super League