HARRY and Meghan have ditched the private jet as they were pictured stepping off a commercial plane following a business trip to the US.

The Duke and Duchess of Sussex - who have handed back their HRH titles- returned to together Canada for Valentines Day.

The eco-friendly pair have been blasted for using private jets - which create seven times the normal amount of carbon emissions.

But Harry, 35, and Meghan, 38, were all smiles photographed stepping off a commercial jet in Victoria, in Canada, on Friday.

They had flown back from a two-day business trip to California in a bid to find new work after quitting as royals.

An onlooker said: "From their happy faces they had a successful time in California but glad to be back."

The couple carried their own hand luggage as they were led off the plane by their close protection officers.

The pair - holed up in a $14million Vancouver mansion - have quit royal duty to bring up baby Archie in North America but need to find new jobs to fund their lifestyle.

Ten days ago Harry gave a keynote speech at a JP Morgan summit in Miami.

The couple did not reveal if they were paid. 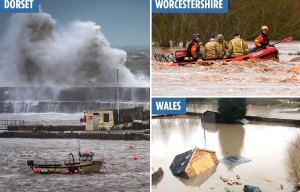 They stayed at Serena Williams' home on Palm Beach before heading to Stanford University in Palo Alto, California, on Tuesday.

The couple are said to have attended "brainstorming sessions" with "professors and academics" helping them creation of their new charitable organisation.

Last week it emerged they have sacked all 15 staff in UK and will be recruiting a new team based in North America.

Where can I buy flour for bread during coronavirus lockdown

10 free TV series to watch on BBC, ITV and Channel 4 during coronavirus lockdown

First pics of MBE-awarded pensioner, 72, who died after ‘altercation with dog walker’

Arsenal star David Luiz plays himself at rock, paper, scissors in the mirror and LOSES in mesmerising video

Can I be stopped and fined by police over the Easter bank holiday weekend?

Five apps to help you learn a new language in lockdown

ADVERTORIAL: Fight Covid-19 and improve your digital skills from the comfort of your home

Aldi issues apology as it removes popular items from stores

Coronavirus UK: How long will the Covid-19 lockdown be extended for in Wales?

Video shows how easily coronavirus cough can travel through air

Brit scientists snap highest ever resolution picture of the sun

The British government knew a deadly virus was coming, but failed to prepare | Richard Horton

Debenhams enters administration with 22,000 jobs at risk after virus shutdown

Here's when temperatures will rise in your area this Easter weekend