Andy Slavitt’s Preventable is a 336-page indictment of Donald Trump, Trumpworld, America’s lack of social cohesion, greed and big pharma. He laments needless deaths, hyper-partisanship and populist disdain of experts and expertise. The word “evil” appears. So does “privilege”.

Slavitt, recently departed as a senior adviser to Joe Biden on Covid response, is himself a product of the Ivy League: the University of Pennsylvania and Harvard business school. He also did stints in the Obama administration and at Goldman Sachs, McKinsey and United Healthcare.

His book reads like Covid-porn for blue America. Unfortunately, he does not reflect on how the US reached this place.

The saga of Albion’s Seed – English Protestants who slaughtered each other in the old country, overthrew the crown in a new land then waged a second civil war – does not figure in Slavitt’s calculus. Said differently, if kin can repeatedly raise arms against kin, the social fabric can never be taken for granted – especially not as demographics convulse. E pluribus unum has limitations.

Slavitt sees Trump’s cruelty at the southern border but fails to acknowledge the grievances of those in flyover country. Brexit and Trump were not one-offs. They were inextricably related. Displacement exacts a price.

Slavitt’s book is subtitled “The Inside Story of How Leadership Failures, Politics, and Selfishness Doomed the US Coronavirus Response”. He lauds pandemic responses in Hong Kong, Singapore and New Zealand and criticizes Greg Abbott and Ron DeSantis, governors of Texas and Florida.

But he ignores the fact that cases and mortality rates in those two states were lower than in New York and New Jersey – states called home by coastal elites.

To his credit, Slavitt does take to task Bill de Blasio, that hapless and tin-eared mayor, for urging New Yorkers to “go out and enjoy themselves at restaurants” as the pandemic took root.

“The impact of New York’s delay was significant,” Slavitt writes.

Similarly, Kristi Noem, South Dakota’s performative Republican governor, is derided for her “freedom-first” strategy. But unlike De Blasio she remains popular in her state and her party. A DeSantis-Noem Republican ticket in 2024 is not out of the question. In the eyes of voters, Noem did something right – much like Andrew Cuomo in New York, now beset by allegations of sexual misconduct but apparently on the verge of dodging a political bullet.

On the other hand, the New York Times reports that even in east Asia and the south Pacific, supposed world leaders in containing the coronavirus, the fight is not yet won. Variants and their dangers loom. Vaccinations lag.

To quote the Times, “people are fed up” and asking: “Why are we behind and when, for the love of all things good and great, will the pandemic routine finally come to an end?”

Patience is never in limitless supply. Not in the US, not elsewhere. Slavitt makes insufficient allowance for this very human quirk.

Trump was callous and mendacious but he grasped what made folks tick. Despite Slavitt’s vilification of big pharma, in those countries that possessed sufficient capital and foresight, vaccine manufacturers came through. Markets can work, even if they result in asymmetries.

As expected, Preventable catalogs Trump’s failings in granular detail: his false promises of Covid quickly disappearing, his embrace of medical quackery, his rejection of testing as a crucial weapon. Slavitt also reminds readers that Trump chucked his predecessor’s pandemic response playbook and gutted the supply of personal protective equipment, just for the sake of blotting out the past.

Politicians are self-centered. Trump more so than others. According to Slavitt, he saw himself as the smartest person in the room and expected to be flattered accordingly. One way to win his attention was to compliment his parenting skills. But being the owner of a debt-laden company forced to pay for golf course upkeep with no one on the greens may have injected additional anxiety. The public was expected to feel Trump’s pain.

Slavitt also describes Trump’s difficulty in coming to grips with the possibility of the pandemic costing him the election, and his decision to offload to the states the mission of combating Covid. The White House became the backdrop for a reality show while the Confederate flag emerged as a symbol of pro-Trump, “liberate the state” sentiment.

As an administration insider told the Guardian in April 2020, Trump was “killing his own supporters”. 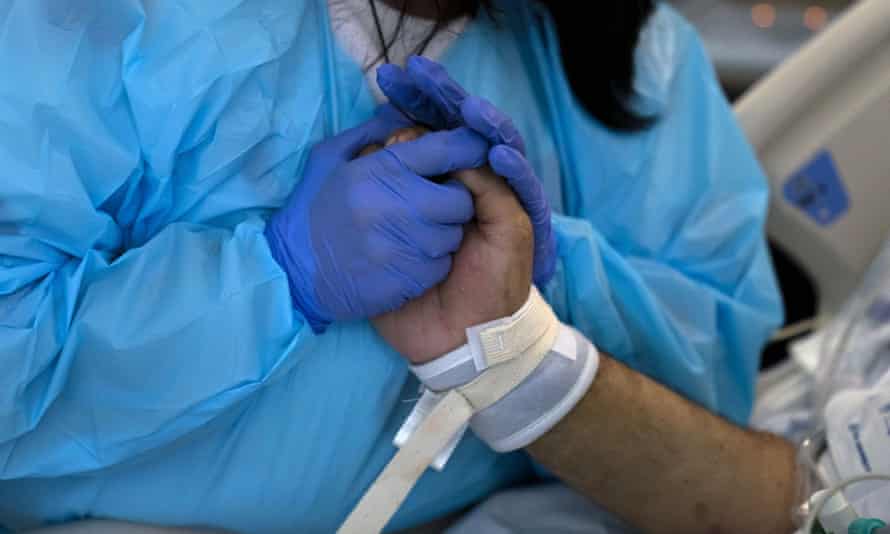 And yet, not surprisingly, Slavitt struggles with the reality that Democratic nay-saying almost lost Biden the White House and Nancy Pelosi the speaker’s gavel. Voters yearned for hope and wanted to know their sacrifice mattered.

Being told “we are in this together” when “we” are manifestly not is more than a problem with messaging. For example, Slavitt omits mention of Gavin Newsom, California’s governor, and his infamous dinner at a Napa Valley restaurant in November as Covid cases mounted. On being found out, Newsom acknowledged: “We’re all human. We all fall short sometimes.” Whatever.

This week, the US death toll passed 600,000. The vaccine works only on the living. The world has experienced more deaths halfway through 2021 than in all of 2020.

Slavitt ends his book wondering whether “the lessons of the past year might be forgotten”. Don’t rule that out.