New Holland has added a double-clutch transmission to its T5 range, expanding the options for stock farmers who crave a slicker alternative to the basic 12-speed Utility stick-shifter.

While simple controls and a rudimentary gearbox remain popular among the price-sensitive livestock fraternity, a growing number of buyers appear willing to part with a few extra grand in return for more sophisticated powershift models.

With that in mind, New Holland now offers two transmissions that bridge the gap between the Utility and the Auto Command CVT.

How does the transmission work?

CNH already uses its double-clutch gearbox across a number of its popular tractor ranges in both red and blue livery, but the T5 is the smallest to offer the option. It provides three ranges with eight gears in each, allowing plenty of changes without jumping between ranges.

It is exactly the same gearbox as in the bigger models but, because of the T5’s short wheelbase compared with the T6 and equivalent Case Maxxum, there is no need for a spacer plate between the engine and transmission. Removing the plate has no effect on power transfer.

The hardware works like Audi’s DSG, with two clutches to control two sets of gears – one for the even cogs and one for the odd numbers. The two shafts run at identical speeds as the gears switch, avoiding any discernible break in power.

This arrangement means the next gear is always lined up and ready. For instance, if it’s running in B5 then the tractor predicts which gear on the even-numbered shaft is likely to be engaged next, whether it is B6 or B4, so the change is slick and quick.

As with many semi-powershifts, dynamic stop/start is a standard feature on the DCT. There are three sensitivity levels set via the dash buttons, so it can be calmed down to avoid drivers head-butting the windscreen. We found it very useful and it will no doubt save plenty of clutch riding during loader work.

It was also handy for pulling away with a 16t muck spreader, where the combination of hydraulic walking floor, 1,000rpm pto and forward motion certainly made the most of the 140 ponies on board. The T5 coped impressively, though.

A clever smooth shifting function in the transmission manages the throttle before a cog is selected, helping to reduce the impact on the engine.

When going up the gears, it drops the rpm to lower the engine speed at which the gear is engaged. Conversely, when slowing down, it increases rpm so that the drop in gear and rise in engine speed isn’t so stark.

The transmission can also be set up with a “memory shuttle” for loading bales or other repetitive tasks. This sets the reverse gear three lower than the forward gear to avoid shooting back too violently.

One of the more obvious gripes is the manual handbrake. Although operators of tractors this size will find it perfectly acceptable to reach down to the left to engage the anchors, the fact that it’s a premium model means it’s not unreasonable to expect the gearbox to flick into neutral automatically.

There’s also no audible buzzer to let you know you’re in gear with the handbrake on, so it’s easy to forget. New Holland offers the £459 option of a park position on the left-hand selector, but we reckon it should be included as part of the standard spec.

It meets Stage 5 regulations without needing to employ exhaust recirculation, instead sticking with the Hi-eSCR that is on most of the firm’s tractors. We found the AdBlue use to be frugal from the 19-litre tank, needing to be topped up on every second diesel fill – not bad, considering the red tank can hold 180 litres.

To deliver some marginal fuel gains, when you jump out to open a gate and leave the tractor running, the engine drops to 650rpm from its usual 900rpm idle, and jumps straight back up once your bum hits the seat again. The DCT gearbox also helps shave a bit off fuel consumption as a result of its lower parasitic losses.

We found it held on well when challenged with spreading big lumps of rotted manure, and didn’t flinch away from the set forward and pto speeds.

Compared with a T5 Utility model, the four-post Horizon cab borrowed from the T6 and T7 models feels like an expansive living room. Operators get loads of space for a tractor of this size and views out to the corners are good. 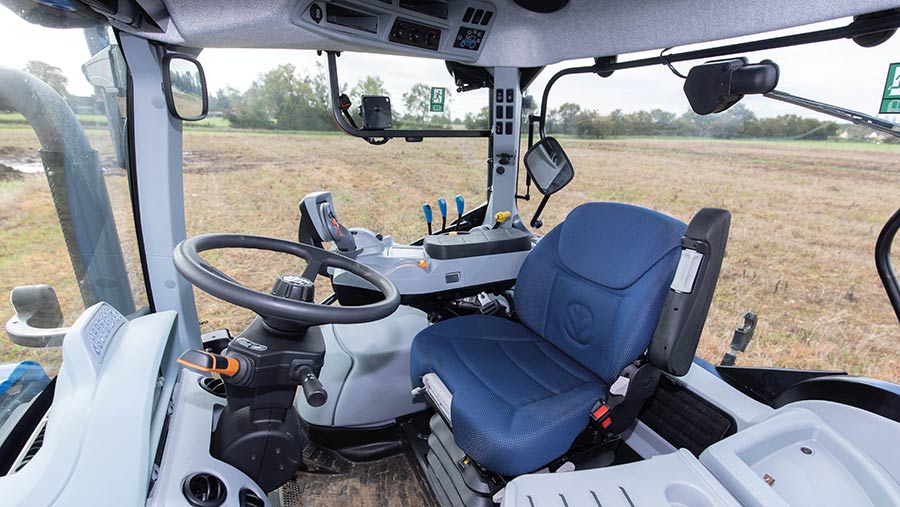 The Sidewinder II armrest fitted to our DCT is also used on models right up to the T7, but it does feel a bit large in this tractor.

The plus side is that operators familiar with the bigger tractors will feel right at home; the downside is that the armrest feels quite bulky, especially when you have no need for the loader controls, electric spools or NH’s Intelliview screen that fill the space.

Opting for the basic spec replaces the big monitor with a small Display Of Gears (DOG) screen, which does little more than it says on the tin. All settings are accessed through the old-school bank of buttons on top of the dashboard – a remnant of the TSA days – which does make tweaks a little laborious compared with a big screen.

One small gripe here is that at night the buttons light up like a Christmas tree and are distracting, even for field work. However, the hard-wearing and functional cab materials feel a nice fit for this spec and size of tractor.

The gearbox is a particular highlight. The hare and tortoise buttons on the static joystick hop between the gears smoothly and with virtually no break in power. If you hold the hare button down, the tractor will rattle through the range at full chat. 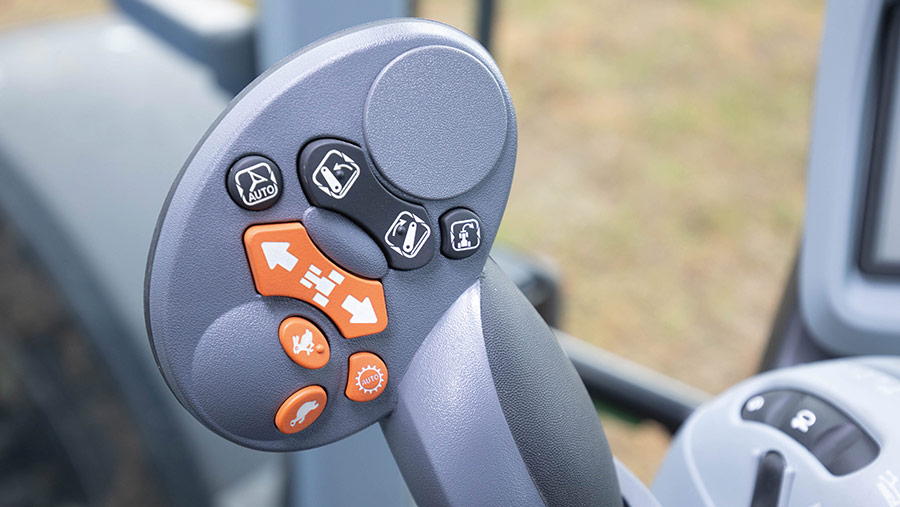 A shift button on the back of the Command Grip initiates shifts through the three ranges and there are two auto modes – field mode goes up the full eight gears within ranges A or B, while road mode sets a start gear up to C8.

The hydraulics are refreshingly simple, with three manual spools to the right of the operator each carrying its own sliding lock. It’s worth bearing in mind that one lever is occupied by the pick-up hitch although it can, obviously, be removed. The valves get full flow all the time but have been designed to take only what is needed, helping to save a bit of fuel. 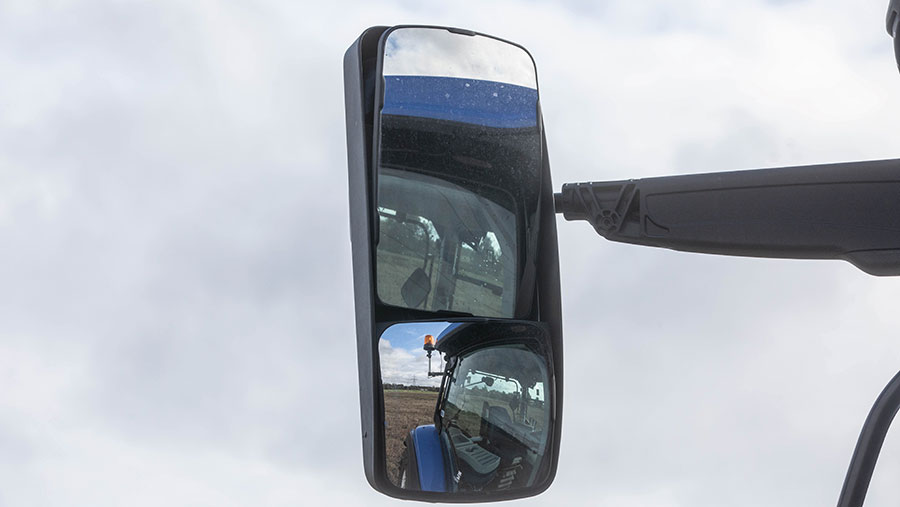 The turning circle is good but the size of the side mirrors could be a downside. They’re really handy on the road, with a main vertical piece of glass and a wider fish-eye unit below, but operators will have to be diligent when sneaking down feed passages to avoid giving them a clout.

After a week with the DCT, the benefits of a smoother transmission for a typical mixed farm became pretty clear. The undoubted stumbling block for smaller enterprises will be the extra cost – particularly over the 16-speed Electro Command – even with the prospect of marginally lower running costs and fuel savings.

It may be a challenge convincing users who have long been devoted to simple gearboxes to opt for something with buttons rather than levers, but New Holland reckons there are plenty of takers for a posher gearbox in an otherwise no-frills machine.

Likes
✅ Big, comfy cab for a tractor of this size
✅ Transmission easy to set for different tasks
✅ Brake to neutral handy for loader work
✅ Engine punches above its weight

The addition of the T5 DCT may have filled a price gap, but it has expanded the range to include four transmission options and an almost overwhelming amount of choice.

The Auto Command units get the same 4.5-litre four-potter as the DCTs, and is available in four models from 110hp to 140hp, all with an identical wheelbase of 2,490mm. The Auto Command and DCT T5.140 models are the only machines available in the Blue Power premium spec, which can add midnight blue paint, chrome grille, a fancy seat and cab carpet.

Above this, NH has decided to drop the T6.125 due to its low sales numbers and significant overlap with the more manoeuvrable T5 models.

Barca's presidential election will not take place on January 24 due to anti-coronavirus restrictions
Zlatan on Covid: I tried to train at home, but immediately felt tired
Bayern are Interested in Militao as a replacement for Alaba. The Brazilian has 3 matches for Real Madrid this season
Fiorentina Interested in Odriosola. The defender of Real Madrid played 1 match in the season
Pavlyuchenko on Tottenham: At first, my English was zero. When I drank a beer, I had good English, Spanish, and Portuguese
Dean Smith is the Premier League's best coach in December. Aston Villa have scored 11 points in 5 matches
Jamie Carragher: Manchester United's win at Anfield shocks the Premier League. Liverpool must put them in their place
Source https://www.fwi.co.uk/machinery/tractors/on-test-new-holland-t5-140-dct