Having just secured his third gold medal of Tokyo, British swimmer Adam Peaty said: “It’s a fun event and that’s what sport needs. It needs to be fun.”

He had been part of the first British mixed relay swimming team to compete in the Olympic Games, smashing the world record in the 4x100m relay in the process of becoming its first champions.

It was just one of three new mixed relay events that made their debuts in the Tokyo Olympics on Saturday, with a second gold success coming for Team GB in the mixed triathlon relay. It has ensured them instant hit status at home. The introduction of the new events is part of the International Olympic Committee’s drive towards achieving gender parity at the Games.

There was huge warmth between the British teammates in their after-race comments. In the triathlon, Georgia Taylor-Brown – who had won silver in the individual event – relished the opportunity to race alongside one of her heroes, Jonny Brownlee: “We do just want to inspire, and that’s what Alistair Brownlee and Jonny Brownlee did for us, and hopefully we can do that for the next generation.”

The relative novelty of the formats at this level also made for interesting tactical choices in swimming. Each section can be swum by a man or a women, leading to an opening leg in Tokyo that featured a split race between four men and four women.

The event ended with the sight of US medal machine Caeleb Dressel trying to claw back a large deficit to Team GB’s Anna Hopkin. She couldn’t believe it, exclaiming after the race “I beat Dressel!” She later added that she had “tried not to look at where he was”. 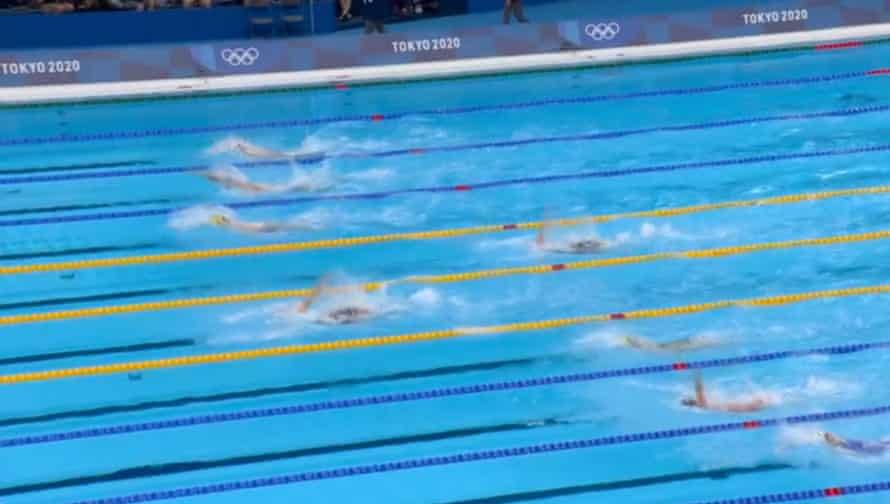 The opening leg of the 4x100m mixed relay in the swimming at the Olympics Photograph: BBC/IOC

The Tokyo organisers have added nine more mixed events than were contested at Rio 2016, meaning 18 are being fought out in Japan.

The mixed 4x400m relay in the athletics has been less enthusiastically received. With the exception of the Netherlands’ rising star Femke Bol, most of the squads for Saturday’s final were somewhat under-powered. The US changed all four athletes from the qualifying event to race a completely different quartet, lacking their biggest names. Poland took the gold.

But there has been support for the changes from some prominent athletes. Former Olympic champion Andy Murray, long a champion of equality in tennis, tweeted: “How good are mixed events in sport? They are a huge asset and so many sports miss a trick not supporting/promoting them more.”

How good are mixed events in sport? they are a huge asset and so many sports miss a trick not supporting/promoting them more. #olympics @TeamGB

Another mixed team event to make its Olympic debut on Saturday was in judo. The hosts narrowly lost the mixed final to France in the Nippon Budokan, where it was the final event of the competition.

The addition of the mixed relay races is not the only notable shift towards women’s sport. Since being introduced in 1972 canoe slalom had always featured more categories for men than for women. That changed this year, with one man’s competition dropped and the women’s C1 introduced. Australia’s Jess Fox became the first woman’s champion, having lobbied hard for its inclusion. Britain’s Mallory Franklin took silver, and said that in the past it hadn’t been taken seriously as “a lot of it was put down to girls not being strong enough”.

The IOC has said it is committed to the changes. Before Tokyo the IOC adapted the rules of the opening ceremony, to allow for joint flag-bearers, with the hope teams would select one male and one female athlete to represent their nation. It also boasted that 49% of the athletes competing in Tokyo would be women – the highest level and a sharp increase since the figure stood at 34% in 1996.

Even approaching anything near gender equity has been a long wait for women. They were not permitted to compete at all in the first 1896 Olympics, and then in 1900 were only allowed in the tennis, golf, sailing and croquet. Such was the strength of feeling that Alice Milliat established the Women’s World Games as a quadrennial alternative to the Olympics, running from 1922 to 1934, which ultimately forced the admission of women’s athletics by the IOC.

But for many years there continued to be sports that were simply men-only at the Olympics. Water polo, weightlifting and the modern pentathlon for women were only added as recently as the 2000 Sydney Games, and women have only been allowed to box since London 2012.

The programme for the Paris 2024 Games is yet to be finalised, but, with the IOC saying it aims to go that final mile and have a 50-50 participation split for men and women by then, it is likely that the mixed team events are here to stay. They certainly will be keenly anticipated by Team GB as an opportunity to defend the two titles they won on Saturday.