Nicolas Pepe can thrive at Arsenal for ‘years to come’, says Mikel Arteta

Pepe, 25, joined last summer from Lille for a reported fee of £72million but - despite showing flashes of his ability - the forward largely struggled to settle in his first season at the Emirates Stadium.

Arteta previously spoke about the improvements the Ivory Coast international needed to make if he was to become a fixture in his side.

Pepe would end the season playing in the FA Cup final win over Chelsea, having also started the semi-final victory against Manchester City.

But he has not started either Premier League game so far this season as new recruit Willian has been preferred. 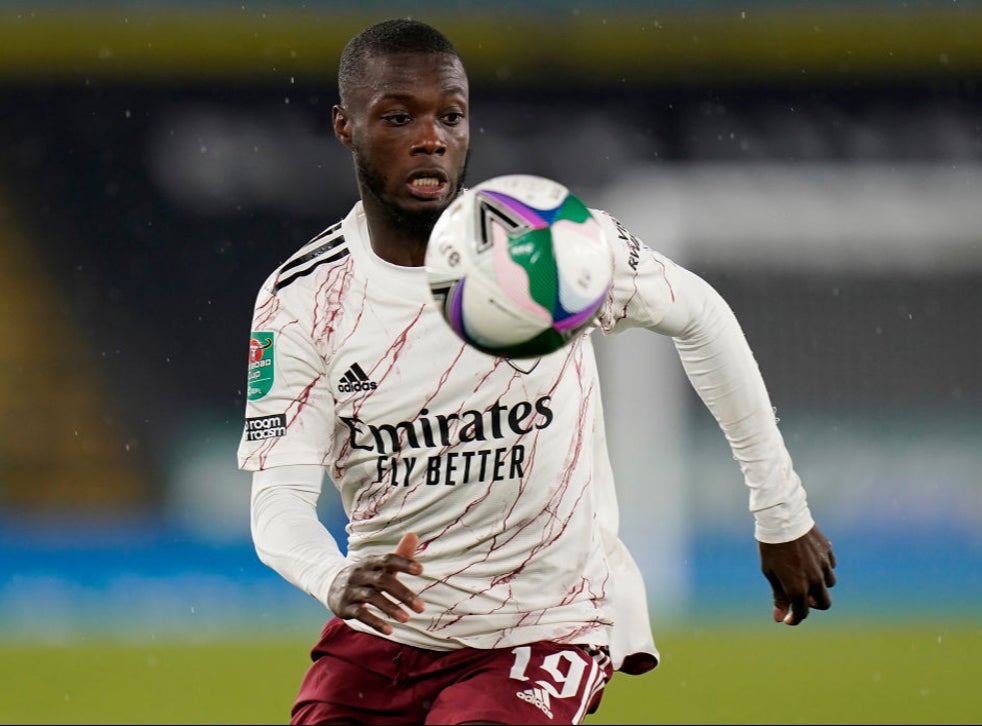 Nicolas Pepe has a long future at Arsenal(Getty Images)

Despite dropping back down to the role of substitute, Arteta insists he remains convinced that Pepe will remain a key member of the Arsenal set-up in the coming years.

"I think he has come a long way, Nico," he said. "Obviously we know what the club paid for him when he joined and that was obviously an extra pressure.

"He is a really good character to have around and I'm really positive we are going to have him for many years. But he is a player who had to adapt, it is a different style and he has a really good attitude and we can see big developments in a lot of places in his game.

"He is very settled here, he is liked by the boys, he is a really good character to have around and I'm really positive we are going to have him for many years and that he can perform at a really high level consistently."

Pepe made his full debut for the Gunners in last season's 3-1 Premier League defeat at Liverpool.

Arsenal now face two trips to Anfield in just three days as they face the champions in the league on Monday before returning for a fourth-round Carabao Cup tie on Thursday.

Arteta led Arsenal to a Premier League win over Liverpool at the Emirates Stadium in July before securing a penalty shoot-out victory over the Reds in the Community Shield - but the Spaniard is expecting a different test next week.

"I think they are getting better and better and they have less weaknesses," Arteta said of Jurgen Klopp's Liverpool.

"They are a fantastic side. The issue with the weaknesses of opponents is how many you are able to exploit and how many opportunities you get to do that.

"With all the incredible things that they have, you know that they are going to try and still be able to do them. So I want to focus on what we can do and what we have to do and control our own aspects.

"For me it's much more important that the overall mindset of the team is right and they have the actual belief that when we get on that plane to go to Liverpool, that we can go there to win.

"If we all have that, we're going to have a much better chance to perform at our highest and have the opportunity to grab the points.

"I haven't been to Anfield with them yet but I'm expecting that every ground we go to, we're going to prepare for the game to win and that they realise they are good enough to do that."

Barcelona - the first team to score for two 17-year-old players in a Champions League match
Atalanta's development has reached a crucial point: the club will soon turn into either Napoli or Roma. Miranchuk - a symbol of change
Sharonov joined the coaching staff of Cyprus Paphos
Yuran headed Khabarovsk SKA
Brugge forward Dennis on goal for Zenit: I said that I only score grandees, but it was a joke
PSG defender Kimpembe Pro 1:2 with Manchester United: We can only blame ourselves
Lopetegui Pro 0:0 with Chelsea: Sevilla showed a good team game
Source https://www.independent.co.uk/sport/football/premier-league/nicolas-pepe-can-thrive-arsenal-years-come-says-mikel-arteta-b598663.html

'The UK is playing with the EU' MEP ridicules Brussels: 'Congratulations, Mr Johnson!'

Talented student, 18, killed herself after becoming overwhelmed by exam stress

Chelsea fans think Cech, 38, would be their BEST keeper despite retiring two seasons ago

How many kids does Bill Cosby have?

UK government borrowing rises to record due to pandemic

Teen, 19, fighting for his life after Feldman Close stabbing

Nine people stranded by tide in Wirral rescued by coastguard

Headteacher charged with nativity assault could return to post

Girl, 3, rushed to hospital after drive-by shooting at birthday party

'They won't have their way!' German MEP blasts Merkel and VDL in fiery Brexit rant

Police solve mystery as set up for Laser Light City

State Pension to rise by £4.40 a week next year in line with triple lock rules

Two men in hospital after violent disturbance in Glasgow street

Woman obtains superinjunction against photos of her with a fringe