On a visit to Warsaw, Armin Laschet said he does not support reparations for Poland. The conservative politician is currently favourite in the race to replace Mrs Merkel as German Chancellor after September’s federal election. He refused to buckle to the demands by Poland’s ruling Law and Justice party for £610billion in compensation for the brutal Nazi occupation.

Some six million Poles, including three million Polish Jews, were killed during the war and Warsaw was reduced to rubble following a 1944 uprising in which about 200,000 civilians died.

Germany says all of its financial claims linked to World War 2 have been settled.

Mr Laschet told a Polish newspaper: “World War 2, caused by the invasion of Poland by Nazi Germany, caused an infinite amount of suffering. Germany is aware of this historic responsibility.

“This responsibility will also determine our policy towards Poland in the future. 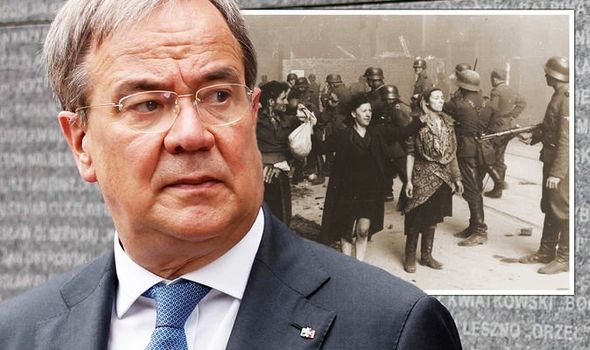 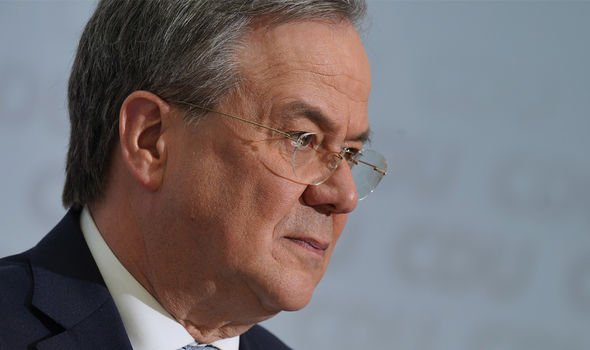 “Reparations have in the past been finally settled by mutual agreement. The constant political instrumentalisation of these issues does little to help.”

Instead, he proposed a series of programmes to help strengthen German-Polish cooperation, including youth and cultural exchanges.

Mr Laschet added: “Germany must always be aware of its historical responsibility for the freedom and independence of Poland.

“This issue must be passed on to every young generation already in history lessons.” 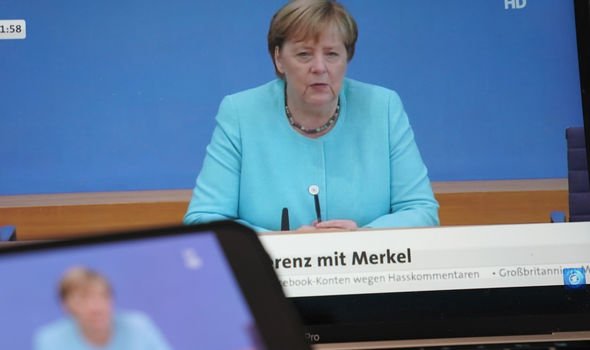 Angela Merkel will step down as German Chancellor after 16 years after September's election (Image: GETTY)

Many in Poland argue that their country did not even receive one percent of what it was owed in reparations after World War 2.

Poland’s foreign minister Zbigniew Rau on a recent trip to Germany said the issue of war reparations was by no means closed for Warsaw.

Last week Mr Rau said: “I emphasised this during the talks with my German counterpart, minister Heiko Maas and, today, I also had the opportunity to raise these issues.

“I cannot hide the fact that raising this topic was sometimes met with vernally a lively and open response from some of the interlocutors.

MUST READ: EU warned against trade war with Brexit Britain: 'More to lose!' 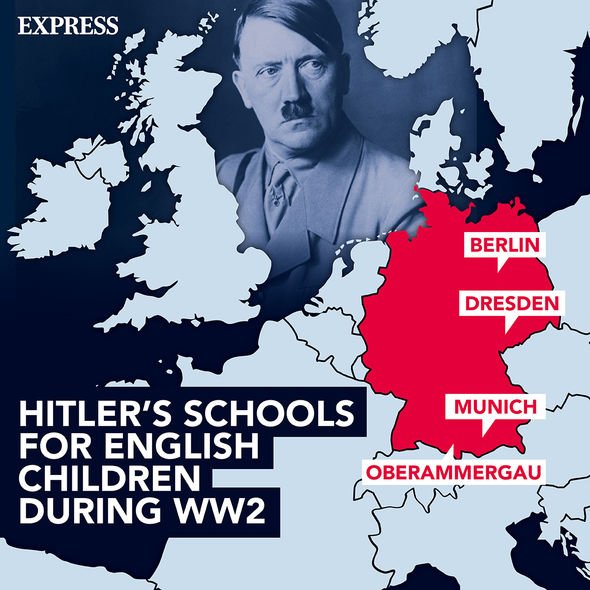 “However, today, I did not face the denial that this issue simply does not exist.

“So the attitudes of my interlocutors are varied and it certainly gives grounds for initiating further arrangements.”

In 2019, Arkadiusz Mularczyk, who was leading the Polish parliamentary committee on reparations, said: “Poland lost not only millions of its citizens but it was also destroyed in an unusually brutal way.

“Many victims are still alive and feel deeply wronged.”

At the time, he argued that the reparations figure could be more than 10 times the estimated £85billion that Poland had received for joining the EU in 2004.

Germany is the largest contributor to the EU’s budget and many of the country’s politicians see its contribution as generous competition to countries like Poland that suffered under Nazi rule.

The Greek parliament has previously also raised the issue of trying to secure more cash from Germany in reparations for Nazi occupation of their country.

New off licence could be coming to Urmston, but locals and a councillor are worried about anti-social behaviour

Are petrol and diesel prices rising or falling? We take a look amid panic-buying frenzy

Apple Maps gets HUGE update for iPhone – is it better than Google Maps?

Celebrity birthdays for the week of Oct. 3-9

McDonald's worker fired after getting savage revenge on customer with 'attitude'

How and when will UK’s fuel crisis end?

Metroid Dread Preview: From hunter to hunted Samus returns in this long-overdue sequel

Theaster Gates: A Clay Sermon review – These room-filling installations tend towards the epic

10 best cat carriers for transporting your furry friend with ease

Girl, 2, who died in caravan park fire laid to rest in Peppa Pig coffin as devastated mum breaks down in tears

Nusr-Et London menu and prices: How much is a giant tomahawk at Salt Bae’s Knightsbridge restaurant?

JD Vance knows nothing about hillbilly values. I should know