The Duchess of Sussex read her book to second-graders at PS 123 Mahalia Jackson school in Harlem on Friday morning. 94 percent of the school’s intake is from an economically disadvantaged background, according to the Telegraph.

The Sussexes went to the school to promote early childhood education and literacy, and were joined by New York City Schools Chancellor Meisha Porter.

Harry reportedly sat cross-legged among the listening class of students as his wife read.

Harry and Meghan will have the final day of their three-day tour of New York City tomorrow. 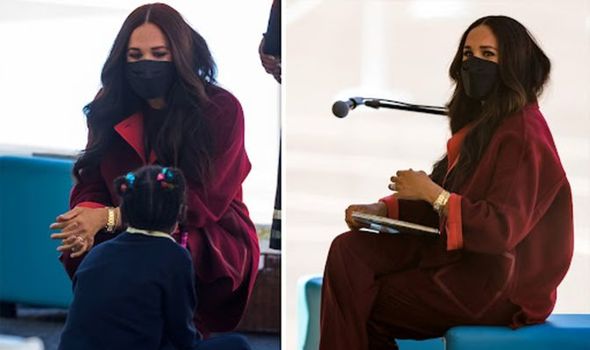 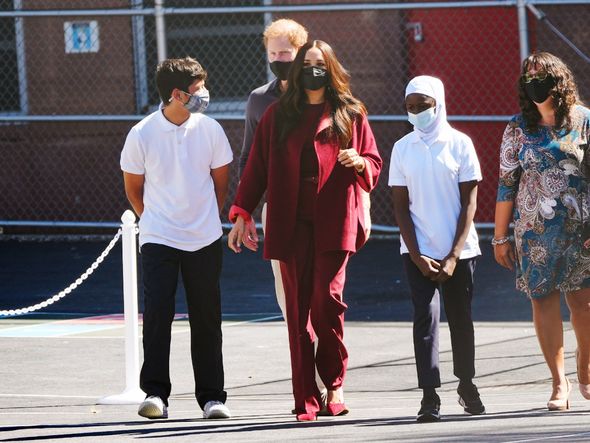 The Duke of Sussex reportedly sat crossed-legged to listen to his wife (Image: Getty)

They met at One World Trade Center, then visited the 9/11 memorial to pay their respects to those who lost their lives twenty years ago.

The Sussexes continued with their jam-packed schedule, meeting US Ambassador to the UN, Linda Thomas-Greenfield.

They are thought to have discussed racial justice, the coronavirus pandemic and mental health.

Then, Harry and Meghan dropped into the offices of the World Health Organisation, meeting Chelsea Clinton and health experts.

In a joint statement, Meghan and Harry reflected on the conversations they had on access to vaccines.

They said: “In this room, we had a number of the foremost leaders on public health, pandemic preparedness, scientific progress, and community building.

“Today’s meeting was a much-appreciated opportunity to learn from some of the most-respected experts who are working tirelessly to end this pandemic.

“Building on ongoing conversations we’ve had with global leaders over the past 18 months, today further reinforced our commitment to vaccine equity. 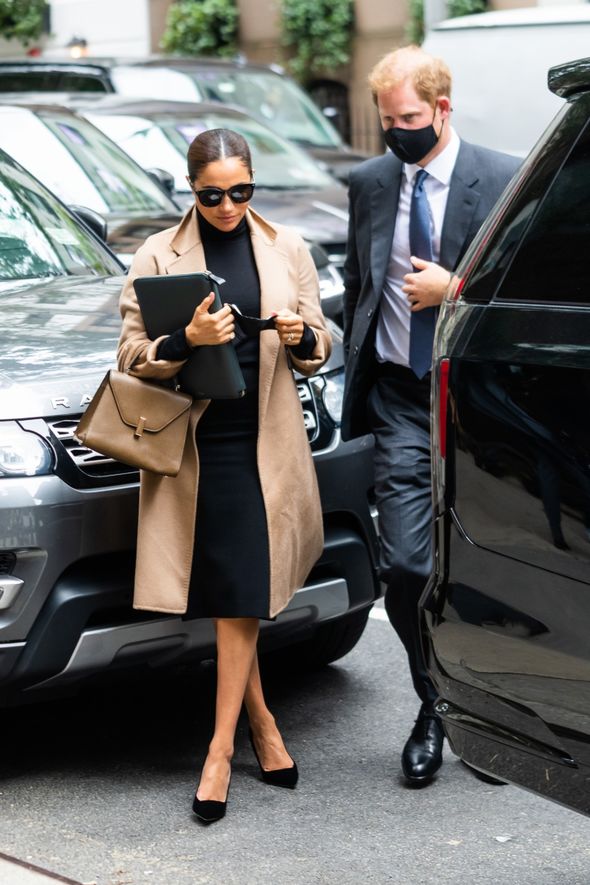 The Duke and Duchess are due to finish their three-day New York tour tomorrow (Image: Getty)

“We’re so encouraged by the spirit of collaboration we heard throughout our conversation and are eager to do our part.”

They were joined virtually by the Director-General of the World Health Organisation, Dr. Tedros Adhanom Ghebreyesus.

He said: “We’re grateful to the Duke and Duchess of Sussex for working with us to bring together this critical conversation.”

Harry, 37, was also seen relaxing in the bar of the Carlyle Hotel last night.

The couple are due to appear at tomorrow’s Global Citizen concert.

Porto winger Luis Diaz is Interesting to Chelsea, Bayern, Real Madrid, Newcastle. Compensation - 80 million euros
Cristiano Ronaldo: My role in the team is to score goals and help with experience. I like to make people happy
Arteta pro 3-1 with Aston Villa: Happy with how Arsenal dominated. That's how we should play
Ole Gunnar Sulscher: I enjoy coaching at Manchester United and life
Patrice Evra: I want to understand where racists come from. They are not born. Perhaps these people are traumatized
The Saint-Etienne match started an hour later due to protesting fans. They threw flares and burned holes in the goal net
Pope Francis thanked Messi for the autographed PSG T-shirt

Take a look around this £1.2m County Durham country house with its own duck pond

'Do you want to meet the Chairman?' - Two fans' post match audience with Amanda Staveley and Yasir Al-Rumayyan

Why Always Him? The joy and pain of Mario Balotelli and the reason Man City fans still love him

If this mega Chinese blockbuster is propaganda, what are Bond and Captain Marvel?

'It's a nerve-racking moment': The questions for Prestwich as its 'tired' shopping centre faces demolition

'Eager' Queen's 'ambitious palace schedule' has caught up with her, expert fears

Huge bungalow for sale with an outdoor cinema and lake across 2.9 acres

Jurgen Klopp weighs in Ronaldo vs Salah debate ahead of showdown

Mum blown away by McDonald's manager after visiting with daughter

Ex-council house had ten offers from people who have never seen it - and 100 people wanting to visit, within 48 hours of going on sale

'I bought six essential household products from B&M, Quality Save, Home Bargains, Wilko and Poundstretcher - here's who was cheapest'

Goodbye Insecure: how the hit HBO comedy changed the game

‘We need him to deliver’: Biden faces wrath of disappointed supporters

‘You can sense Selim the Grim’s anger’: portraits of Ottoman sultans go on show

Cop26 climate deal will be harder than Paris accord, admits Sharma

Who is Graeme Jones? Newcastle caretaker boss taking the reins from Steve Bruce

Ben Stokes, Carlos Brathwaite and the most famous over in T20 World Cup history

Where is Cher Lloyd now? Doting mum, Jesy Nelson row and why she doesn't speak to Cheryl

Doctors thought Michael, 36, had IBS but it was cancer

Why do some people delay getting vaccinated or pretend Covid doesn’t exist?

Cheers to that: Five sustainable spirit brands for guilt-free drinking

A three-course menu to celebrate autumn

‘We are writing our own food history as we speak’: What does New Zealand cuisine really mean?

Winter is coming: How to store seasonal vegetables in the colder months

Mission Kitchen – where future food stars are made

UK weather: 40mph winds set to batter Brits all weekend and heavy showers on the way

Hotel plan for fire ravaged Belleisle House in doubt after no partner is found for £12.5 million project

The War on Drugs: ‘Springsteen gets a kick out of my son being named Bruce’