Meghan Markle has spoken out about the death of African American George Floyd which has sparked Black Lives Matter protests across the globe. George Floyd, 46, died of a heart attack after being restrained by a police officer in Minneapolis last week. Meghan issued an emotional plea to her former high school in a moving graduation speech.

George Floyd died from a cardiac arrest after a police officer restrained him be kneeling on his neck for eight minutes.

Meghan made the moving speech to pupils graduating at Immaculate Heart High School in Los Angeles.

Meghan started the address with: "As we've all seen over the last week what is happening in our country and in our state and in our home town of LA has been absolutely devastating," 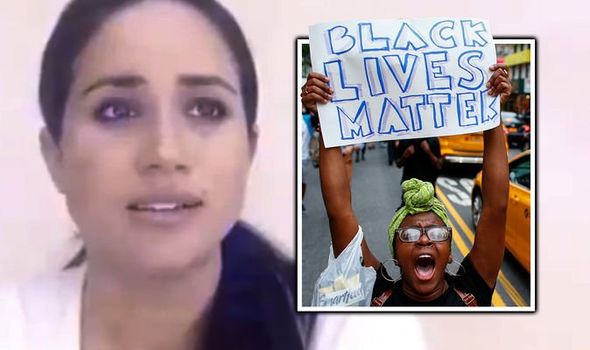 Meghan revealed it was one of her teachers who first gave her the courage to speak out.

She said: “One of my teachers, Ms. Pollia, said to me, ‘always remember to put other’s needs above your own fears.’ That has stuck with me throughout my entire life and I have thought about it more in the last week than ever before.”

Meghan recalled living is Los Angeles as a girl during the 1992 riots.

She said: “I was 11 or 12 years old and it was the LA Riots, which was also triggered by senseless act of racism.

“I remember the curfew and I remember rushing back home and on that drive home, seeing ash fall from the sky and smelling the smoke and seeing the smoke billow out of buildings… I remember seeing men in the back of a van just holding guns and rifles.

“I remember pulling up the house and seeing the tree, that had always been there, completely charred. And those memories don’t go away.”

She ended the address with a message of hope.

Meghan said: “We’re seeing that right now, from the sheriff in Michigan or the police chief in Virginia.

"We’re seeing people stand in solidarity, we are seeing communities come together and to uplift.

"You are going to be part of this movement.”

“With as diverse, vibrant and opened minded as I know the teachings are at Immaculate Heart, I know you know that Black lives matters. You’re going to use your voice in a stronger way than you have ever been able to because most of you are 18 – or you’re turning 18 — so you’re going to vote. You’re going to have empathy for those who don’t see the world through the same lens that you do. You’re ready. We need you and you’re prepared.”

Tonali passes poorly, fails in defense and loses the competition in Milan, and Pirlo calls him perfect and puts him above himself
Edouard Mendy: I am Chelsea's first African goalkeeper. It's a big responsibility
Marcelo will not play Betis due to back discomfort
We want to make sports shopping better. Become a part of our research focus group!
Claudio Bravo: In Barca and Manchester City, the goalkeeper should be a Central defender
Barca were offered Cavani and Dzeko. The club rejected them
West ham offered 23+10 million pounds for defender fofan. Saint-Etienne refused
Source https://www.express.co.uk/news/royal/1291123/meghan-markle-george-floyd-statement-black-lives-matter?utm_source=feedburner&utm_medium=feed&utm_campaign=Feed%3A+daily-express-news-showbiz+%28Express+%3A%3A+News+%2F+Showbiz+Feed%29