First half scintillating; second half a touch concerning. This was Manchester City in a season-opening trip to Wolves that could be cast as the start of what might be the greatest test yet for Pep Guardiola: the uncharted territory of a fifth season in charge of a team who had question marks against them before kick-off wherever you looked.

Sergio Agüero was out for two more months because of a knee injury. Aymeric Laporte was missing owing to recovery from Covid. Ilkay Gündogan had been placed in quarantine after testing positive for the virus. A 35-year-old Fernandinho was selected in defensive midfield, Nathan Aké made his debut alongside the uneven John Stones in central defence and though David Silva ended a glittering decade by departing in the summer, the bench lacked its usual blanket strength in depth.

The loss of Agüero meant Guardiola was without City’s record goalscorer just as Laporte’s recuperation meant no defensive linchpin to help ease Aké, a £41m summer acquisition, into a rearguard who creaked all last season. Yet if these were the prime imponderables as Guardiola’s 2020-21 vintage kicked off, how they took the contest to Wolves before the interval made both seem a red herring.

City were sharp and ruthless against Nuno Espírito Santo’s side in an opening 45 minutes executed in relentless high gear. Phil Foden is Silva’s replacement and the 20-year-old may just prove to be of similar quality. After his misdemeanour on England duty in Iceland he was part of a Guardiola attack who also featured Raheem Sterling, Gabriel Jesus, and the imperious Kevin De Bruyne. They all whirred between midfield and attack to dizzying effect.

It is hardly news that City drop bombs whenever they move forward. Neither is it a revelation that defence is a problem – this predicated Aké’s purchase from Bournemouth and is the reason why Guardiola pursues Napoli’s Kalidou Koulibaly. 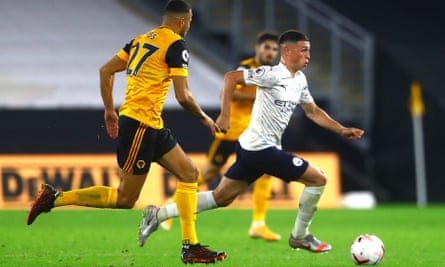 Phil Foden powers away from Roman Saïss and there is more responsibility on the young England midfielder this season after David Silva’s exit. Photograph: Kieran McManus/BPI/Shutterstock

Laporte’s unavailability meant Guardiola was forced to field Stones, a defender whose errors and lapses in concentration have gradually erased a once firm faith. Yet when Adama Traoré wheeled along the right before the break the 26-year-old’s interception oozed class. De Bruyne has copious amounts of quality. So it was that his guile claimed the opening penalty by having Romain Saïss lunge at him; his cool-eyed finish from the spot giving City the lead.

The hosts were being smothered and there was zero let-up as City dominated ball and territory. Despite limited chances in the side, Foden scored eight times last season and he registered a first of this one by starting and finishing a fluid sequence. His strike was notable for the calm way he passed the ball beyond Rui Patrício in the Wolves goal.

This was greeted by a delighted Guardiola revelling in the mode of football he loves to see from his players. Later, though, Foden spurned a chance from close range, then in the second half Jesus hit a shot straight at Patrício: misses that threatened to be costly as City’s defensive frailties emerged.

Credit to Wolves for this: a refusal to fold meant suddenly Stones was being exposed for the ball-watcher he can be as Raúl Jiménez and Daniel Podence were each granted space they should not have been. This came from a regulation cross and a pass over the top – Stones was errant in his lack of alertness and was relieved when both opportunities were wasted.

Yet alarm bells clanged after Podence cheekily nutmegged De Bruyne and teed up Jiménez and the Mexican’s header gave Ederson no chance. Here, once more, there had been no challenge from City and so suddenly Guardiola was twitchy and Wolves back in the contest. A gauge of how Nuno’s men had rattled City was Guardiola’s removal of Sterling for the manager’s other summer buy, Ferran Torres: a decision greeted by a shake of the head from the England man.

By the end Jesus’s third confirmed the win, yet how City are to fare in the season ahead remains unclear. Against Leicester on Sunday there may be another clue.

Carragher on Mourinho: they Said his football was from a different era. If he won the Premier League, it would be great
Gennaro Gattuso: Napoli need to play above all praise to beat real Sociedad
Neymar was substituted in the 26th minute of the match against Istanbul due to injury. He was crying
Juventus shares have risen four times in five years. Ronaldo-this is only one of the reasons
Gary Neville: Mourinho gives Tottenham the confidence to win the Premier League. Jose is only Interested in winning
Rivaldo: I'm not sure about Barcelona's chances of winning the Champions League
Toni Kroos: there was always a party at Bayern after away games in the Champions League. It was annoying
Source https://www.theguardian.com/football/blog/2020/sep/22/manchester-city-wow-then-wobble-to-give-few-clues-of-what-lies-ahead