The French President said on Tuesday that Europe needs to stop being naive when it comes to defending its interests and build its own military capacity, as he sealed a deal with Greece for French frigates worth in the region of 3 billion euros.

France was plunged into an unprecedented diplomatic crisis with the United States, Australia and Britain earlier this month over a trilateral nuclear security deal that sank a multi-billion dollar French-designed submarine contract with Canberra.

That has caused much soul searching in Paris over its traditional alliances.

Speaking for the first time on the issue, Macron on Tuesday seized the opportunity to urge for more European autonomy as Washington increasingly reorientates its interests towards China and the Indo-Pacific.

"The Europeans must stop being naive. When we are under pressure from powers, which at times harden (their stance) , we need to react and show that we have the power and capacity to defend ourselves. Not escalating things, but protecting ourselves," Macron told a news conference with Greek Prime Minister Kyriakos Mitsotakis. 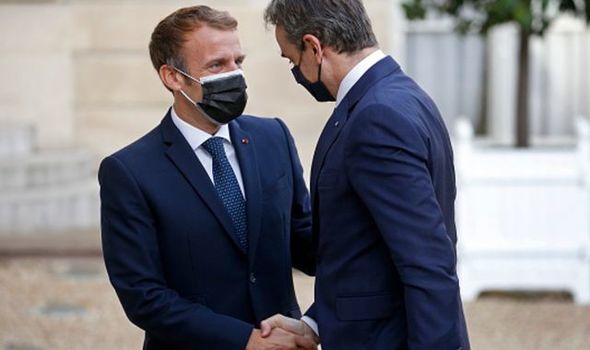 "This isn't an alternative to the United States alliance.

"It's not a substitution, but to take responsibility of the European pillar within NATO and draw the conclusions that we are asked to take care of our own protection."

According to anonymous EU commentator The Greek Analyst, such a deal sprung from Germany's inability to protect Greece's interests against Turkey.

He argued that as Angela Merkel put German interests before the EU and the safety and defence of other member states, Greece can no longer see Germany as its ally.

He wrote: "Greece’s multi-billion euro investment in defence equipment would not be necessary if German-led EU under Merkel had clearly put its weight behind Greece versus Turkey's continuous attacks in the Eastern Mediterranean, rather than supply Turkey with military-level German submarines and designs for new naval Spanish carriers."

He added: "When it comes down to Merkel’s approach on Erdogan’s Turkey, Germany has allowed an aggressor at the borders of EU’s southern flank to continuously terrorise two member states — and even encroach on their sovereignty — not just facing zero consequences, but also being rewarded with EU funds.

"Extremists inside the EU pushing for its dissolution and aggressors outside the EU seeking pieces of it have been the greatest net gainers.

"This is why countries like Greece & Cyprus, feeling expendable under the plans of current German EU leadership, have embraced realpolitik.

"What once was considered only a fringe opinion emanating from the devastating effects of German-led austerity in the Greek crisis is now a fundamental driver of Greek foreign policy: 'Athens can no longer depend on Berlin, as it does no longer act like an ally.' Plain and simple." 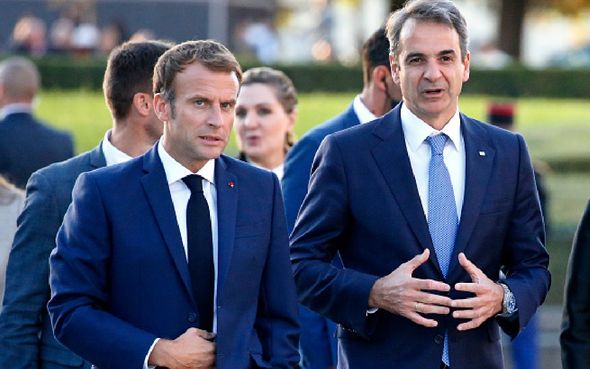 Emmanuel Macron says Europe needs to stop being naive when it comes to defending its interests (Image: GETTY)

He concluded: "People might lash against Macron’s style all they want, but so far, no other European leader with the gravitas of a country like France has grasped the geopolitical implications of idleness against external aggressors and lack of strategy vs the weaponisation of internal threats.

"If the EU is to survive as a peace project, it must move swiftly away from Merkel’s style of non-confrontation (chiefly towards authoritarian leaders) that only breeds the seeds of further discontent, gradually weakens EU’s geopolitical position and sheds away EU member states sovereignty."

Under Tuesday's agreement Athens agreed to buy three frigates with an option to buy a fourth for about 3 billion euros, a Greek government source told Reuters.

The accord, part of a broader strategic military and defence cooperation pact, comes after Athens had already ordered some 24 Dassault-made Rafale fighter jets this year, making it the first European Union country to buy the fighter jet.

"This will tie us for decades," Mitsotakis said. "This opens the door to the Europe of tomorrow that is strong and autonomous, capable of defending its interests."

When asked whether this deal risked raising tensions in the eastern Mediterranean, Macron said the accord did not target a country specifically, but Greece, as the outer border of the European Union needed to be protected.

"I don't get the feeling that in the summer of 2020 it was Greece that was bellicose in the eastern Mediterranean," Macron said, alluding to Turkish actions in the region.

"As Europeans, it is our duty to show solidarity with members states. It is legitimate that we commit to equipping it so it can ensure its territorial integrity is respected and that we commit to cooperating to protect it in case of intrusions, attacks or aggressions," he said.

You walk, and I fly. Zlatan about hitting through himself in the match with Verona
Lille coach: Benzema is an outstanding player. This is what is needed for the Golden Ball
Sandro Wagner: Messi didn't deserve the Golden Ball. Chiellini is the favorite, followed by Lewandowski
Gary Neville: Manchester United stars don't plow like de Bruyne, Mane, Bernardo and Firmino. They lack such a work ethic
Salah turned into Messi. Lineker on Liverpool forward
We will ask you to punish those who unreasonably accused Glick of racism in the match with England. The Polish Football Union will appeal to FIFA
Milan's midfielder Rebic suffered a muscle injury in the match against Verona