The 2020 winners of the reality show looked all smiles as they had fun on a lush night out with their villa buddies.

The stunning couples smiled for cameras as they were pictured leaving the Dakota Grill in Manchester.

He completed the look with a pair of black suede shoes and flashed a silver watch on his left arm.

Paige was snapped clinging to her man's arm as they made their exit from the restaurant and she stunned in a short leopard-print dress and cute black leather jacket.

She completed the look with a small black handbag with a pair of brown heels and showcased her long beautiful blonde curly hair as she flashed her perfect smile for the cameras.

Mancunian couple Callum, 24, and Molly, 25, looked to be in good spirits as they left the Dakota Grill.

The scaffolder opted for the casual look, donning a white zip-up t-shirt with gold outlines.

Molly, who entered this year's Love Island at the Casa Amor stage, dazzled in a pair of white dress shorts, showing off her beautifully toned long legs.

The model also wore a light green top and had a chique white blazer draped over her shoulders.

She sported a brown clutch bag and her luscious long blonde hair covered her chest.

Molly completed the look with a nice pair of beige heels. 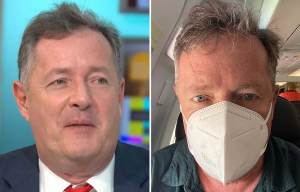 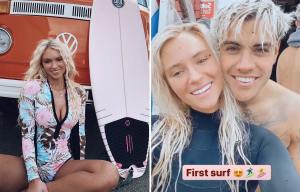 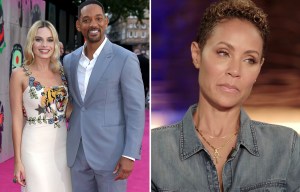 Paige has made strides in her singing career as she is ready to record her first album.

An insider said: "She's really excited to be in the studio. She's got a lot of ideas she's working on.

"She doesn't know if the album will be pop or more dance, but it's a case of getting in the studio and seeing what works at the moment.

"The album won't be out until next year - it's very early days."

Molly on the other hand also has much to be excited about as she signed a six figure deal with clothing brand I Saw It First earlier this week.

The collection, called Along Came Molly, has now launched on ISAWITFIRST.com featuring a mix of casual styles and going out looks.

Gattuso on the match with Barca: Napoli will climb Everest
Lampard about the game with Bayern Munich: the History of the games, when everything changed. Chelsea needs to be trusted
Zinedine Zidane: I am the coach of Real Madrid until something extraordinary happens
Varan on relegation from the Champions League: This is my defeat. It is a shame for the partners
Guardiola on the conversation with Zidane: He congratulated me on La Liga and asked about my family. I hope one day we can have dinner and talk about everything
Sarri on the future: I Don't think bosses make decisions based on one match. They will appreciate the whole season
Levandovsky's transfer to Borussia was considered a mistake. He flogged the moments and lost the competition to a future Spartak player
Source https://www.thesun.co.uk/tvandshowbiz/12103232/love-island-paige-finn-double-date-molly-callum/

Barcelona vs Napoli prediction: How will Champions League fixture play out tonight?

Dozens evacuated from their homes after huge wildfire in Surrey