LOUISE Redknapp admits feeling afraid to open up about her marriage former footballer Jamie Redknapp in her autobiography.

The singer, 46, penned You've Got This as a reflection on her life but felt "scared" opening up about her marriage.

Louise insisted the book "isn't about being nasty about anybody" but rather a chance for her to reflect on her time in girl group Eternal, her marriage, motherhood and the lessons she's learned along the way.

"Probably the last few years of my life [were the hardest]. I can talk about Eternal, being just me and my mum for a few years," she told hosts, Ronan Keating and Alex Jones.

"The last few years I've learned so much. Those were the chapters I was most scared about putting out.

"This isn't a book about being nasty about anybody or hurting anybody, this is just me saying how I felt as a woman, as a mum, that got to a certain age in my life. Things got a bit far and I put it down on paper. It's what I learned from that time."

She admitted her sons were her "saviours" after feeling "shocked" about the "amount of judgement" she has received since her divorce.

"The message I try and give in the book is that we're not all perfect and no one knows anyone else's life unless you're walking in their shoes," Louise explained

"I was really shocked by the amount of, I don't know, judgement maybe is the right word. I couldn't quite understand why I was so heavily judged."

She added: "I was going through a hard time and I think what I did learn is you have to get broad shoulders in life. Keep your chin up and keep going. My boys were an absolute saviour.

"It's not about divorce, it goes right through the years. The dating bits are ridiculous, but very truthful."

Louise the added: "I've really just talked about certain stages in my life. Then the second part of the chapter is, what I've learned along the way, what I wish I would've done different.

'As much as it speaks about my life, it's not a big tell all book. This is a book for anybody that feels they don't always get it right.'

The former Eternal star also added that she will likely not be writing anymore books in the future, saying: 'I don't think I've got another book in me, it's too emotional!'

It comes after she opened up about feeling "lonely, anxious and unimportant" in her marriage to ex-husband Jamie.

Louise said in her new autobiography there was trouble brewing behind the scenes, despite publicly appearing like the perfect celebrity couple.

She wrote: "For a long time, I ticked all the boxes of being the 'picture-perfect' wife. The truth? For a lot of that time, I actually felt lonely, anxious and unimportant."

Louise added: "Looking back, I wish I'd sat down and really tried to explain how much I was struggling, how unimportant I felt in our lives together and how depressed this made me feel.

"I wish I'd been honest and said I felt unloved. I never spoke about how things were at home to a single soul."

The singer explained that she felt insignificant and alone as Jamie's career as a footballer and then a pundit soared.

Her return to public life came in 2016 when she agreed to appear on BBC's Strictly Come Dancing and almost winning the show reignited her passion for performing.

The star admitted that she wanted to go back to work on a stage in front of an audience but battled with OCD, self-doubt, depression and an unshakable feeling that she "wasn't good enough". 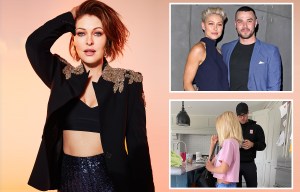