Turn on the radio or television in France, and it is gloom and doom from the first morning headline to the last late bulletin. France is in terminal decline, we are told, mostly by rightwing presidential hopefuls engaged in a competition over who can utter the darkest, direst warnings of a future in which they are not voted into the Elysée palace next April.

Declinism is à la mode; bleak is the new black. These purveyors of nostalgia and what the French call morosité are driving the country into one of its periodic existential crises with a rallying cry plagiarised from Donald Trump that only they can “make France great again”.

“What we are hearing is about decline, how things were better before, how France has lost its place in the world … it’s a photofit of pessimism,” said social scientist Antoine Bristielle of the prestigious Jean-Jaurès Foundation.

“We now have 75% of the country that believes France has declined, and this decline is irreversible. And it’s not just that they believe it was better before but that it will be even worse in future.”

The far-right political pundit turned presidential candidate Éric Zemmour, whose 2014 book The French Suicide lamented the loss of the country’s “soul”, is the country’s pessimist-in-chief.

Zemmour argues that France has been declining since the defeat of Napoleon at Waterloo and espouses the far-right “great replacement” conspiracy theory that Muslim immigrants are replacing the native population. Bristielle said: “If we look at how people voted in 2017, there is a correlation between this idea of decline and pessimism and the [political] extremes, particularly the extreme right. Éric Zemmour is promoting the fantasy of Napoleon and the Trente Glorieuses [the 30-year economic boom after the second world war] and the idea that if you don’t vote for him then the situation, which is catastrophic, will be even more so.” 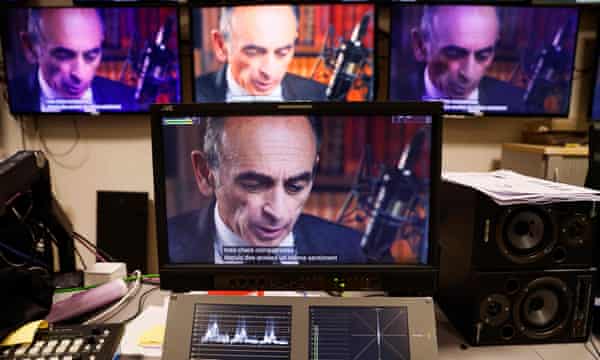 He added that, despite the rightwing discourse saturating the French airwaves, polls consistently show people’s top election priorities are spending power and the environment. “The real worry is the inability of other political parties to show a more attractive future and to reassure the population,” Bristielle said. “This pessimism is central to building the combat in the extreme right. It’s like Make America Great Again. We can see clear parallels between Zemmour and Trump. And at the moment, this message from the right is all we are hearing.”

However there is, as Emmanuel Macron is fond of saying, en même temps [at the same time] a striking paradox; out on the streets, people are far from downcast. Bars and restaurants are buzzing, shops are still in business – unlike many on British high streets – and far from being gloomy, the French have been telling pollsters they are happy.

“In the world after the Covid crisis, the French have returned to what is essential,” said pollsters Elabe, whose Baromètre des Territoires 2021 survey last month suggested that while 60% are convinced the country is in a bad way, 78% are content. “Of course, there has been illness, victims, deaths, suffering … but finally, this situation has made us rediscover, revisit the ingredients of happiness.” These essentials, the pollsters suggested, were not “totems of consumer society” like smartphones and nice cars that now “seem almost derisory”.

Claudia Senik, an economist at the Paris School of Economics and director of the Wellbeing Observatory, which maps the highs and lows of French morale, agrees: “It’s true the French are often gloomy, but now I would say it’s party time. People remember the last year [of Covid] as terrible so they are happy now. It’s a cycle but we are now in the happy phase.

“We can follow the fluctuations of happiness, life satisfaction and optimism and right now … it’s really the high life in terms of satisfaction. People are working, consumers are spending and it feels very dynamic.”

Not all the French are happy. The gilets jaunes [yellow vest] protesters have resurfaced after the Covid lockdowns, clashing with police, and French residents of Guadeloupe rioted, looted and set up street barricades recently in protest at coronavirus restrictions.

There are plenty of reasons for the French to be cheerful, despite rising energy prices, supply chain delays, a drop in industrial production and a new surge in Covid cases. Unemployment has dropped, jobs are being created, the economy is expected to grow by 6% this year, the standard of living is rising, and after two lockdowns people have savings to spend for Christmas.

Senik says the French have an ambivalent attitude towards happiness, “always dreaming of something better”.

Asked to explain how 75% say France is in decline yet 78% say they are happy, Jérôme Fourquet, from pollsters IFOP, said: “It’s a paradox that we find in all opinion polls: when the French are questioned about the future of the country, we are often record-holders in terms of gloom; when questioned about their personal situation, things are fine.”

“There is a gap between a highly invested individual sphere and a struggling capacity for collective projection. Until recently, the French were kept under the illusion that we were one of the great powers of the world. There is a gap between the memory of a very powerful Gaullist France and the reality of a France that has now become a middle power, which is troubling our citizens.”

Gaël Brulé, an author and researcher into happiness, said: “One of the [many] paradoxes of French happiness lies in the fact that it is evoked in the collective but lived in solitude.

“Covid has accelerated this trend and acted for others as an eye-opener, forcing central and metaphysical questions into the heart of our lives: Why am I doing this? What is the purpose of life? What is my place?” he told Marianne magazine.

The French have been turning to a well-known antidote to the blues, according to newspaper reports. Chocolate is currently enjoying an unprecedented boom to “chase away the melancholy”.