The Labour MP for Batley and Spen, Ms Cox's former constituency, spoke in the House of Commons about the difficulties of the loss and - the support necessary to move through the process. Ms Cox was murdered in 2016, sparking widespread concern for the safety of MPs. During her speech, Ms Leadbeater admitted she did not know Sir David Amess but believes, based on tributes by other MPs, they would have got on well.

Ms Leadbeater became visibly emotional as she also reflected on coping with the tragic loss of her own sister.

She said: "For reasons that I would never wish for any other member of this House or indeed anyone, I do have a unique perspective on what those closest to David are going through.

"I want to send them my love, support and solidarity from myself, my parents, our family and the people of Batley and Spen.

"I blocked out most of what happened when Jo was murdered. 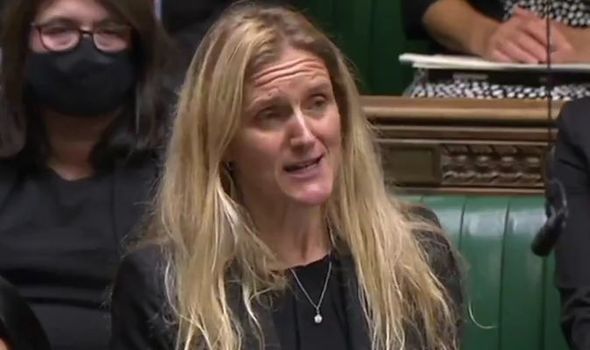 "But I do remember very clearly the moment I took the phone call saying she had been attacked.

"I remember physically trembling and the visceral pain that overtook me and it breaks my heart to think that another family has had to experience that phone call and the nightmare that follows.

"It is a rollercoaster of deep trauma that no one should have to experience."

Mr Leadbeater received affirming murmurs from the MPs as she continued to reflect on her own experience.

She continued: "I also know that David's family will be in utter shock, as I know many of you are.

"But I hope at some point they are able to hear some of the beautiful and very funny tributes that have been paid to him today and that will provide a morsel of comfort amongst their pain."

Boris Johnson announced that Southend will be granted city status in honour of Sir David.

Speaking in the House of Commons he said: "Sir David was taken from us in a contemptible act of violence striking at the core of what it is to be a member of this house, and violating both the sanctity of the church in which he was killed and the constituency surgery that is so essential to our representative democracy.”

“But we will not allow the manner of Sir David’s death in any way to detract from his accomplishments as a politician or as a human being.”

“Sir David was a patriot who believed passionately in this country, in its people and in its future. He was also one of the nicest, kindest and most gentle individuals ever to grace these benches.

Mr Johnson added: “As it is only a short time since Sir David last put that very case to me in this chamber, I am happy to announce that Her Majesty has agreed that Southend will be accorded the city status it so clearly deserves.

“That Sir David spent almost 40 years in this house, but not one day in ministerial office, tells everything about where his priorities lay.”

BREAKING: Man charged over the alleged murder of Amber Gibson

How to stop your cat from climbing your Christmas tree

ADVERTORIAL: Read how Lewis Webster rose from rags to riches

Storm Arwen: How to claim from Northern Powergrid if you were cut off

ADVERTORIAL: See how Lewis Webster turned his life around to improve his mental health

Virgin Media down as thousands of customers report outages

Four women and girl, 17, arrested for murder after man, 37, dies in street row at housing estate in East London