It was strikingly clear that the most dangerous moment in Jerusalem’s worst unrest for years would arrive on Monday. After weeks of mounting anger, a series of provocative events were all set to spiral together at once, creating a tinderbox situation that world powers warned needed delicate handling.

The European Union had called on authorities to “act urgently to de-escalate the current tensions in Jerusalem” while the US said the Israeli government should “pursue appropriate measures to ensure calm”.

But even before dawn broke, tensions had been raised another notch. And by the end of the day, rocket sirens were blaring in Jerusalem.

Fierce confrontations erupted overnight as Palestinians threw rocks and launched fireworks at police, who returned fire into the packed crowds with round after round of rubber bullets and stun grenades.

By morning, heavily armoured officers had stepped up the crackdown, pursuing protesters by storming the sacred Jerusalem site that holds the Dome of the Rock and leaving the stained-glass windows in the al-Aqsa mosque – the third-holiest site in Islam – smashed. 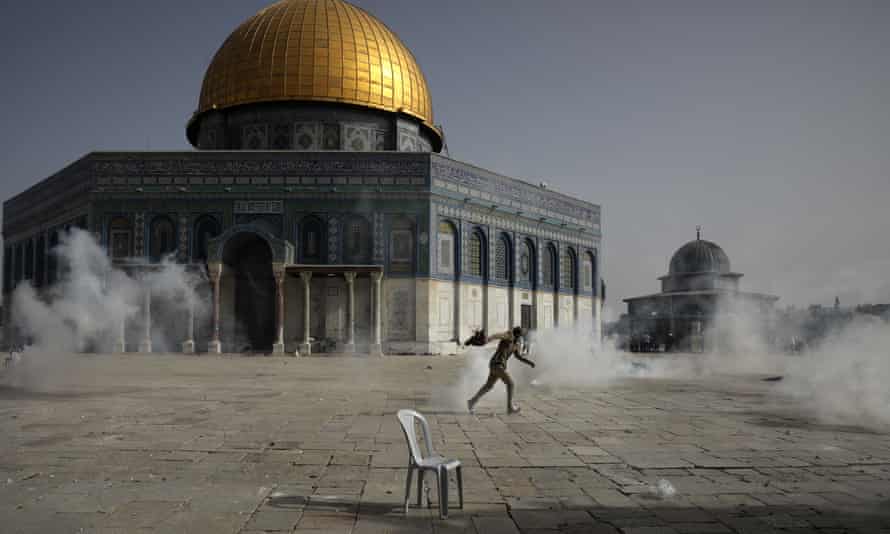 A Palestinian man runs away from teargas during clashes with Israeli security forces in front of the Dome of the Rock. Photograph: Mahmoud Illean/AP

One worshipper, Mahmoud Mohamed Ali, 54, said officers closed the doors of the mosque, trapping people inside. “People were suffocating from the gas,” he said, still coughing from what he said was teargas. “What is Israel going to gain from this?”

Shaky footage showed grey smoke inside the mosque’s ancient halls, lit by chandeliers and then – more brightly and suddenly – by what appeared to be a stun grenade.

Hamas, the Islamist militant group that rules inside Gaza and has fought three wars with Israel, warned it “will not stand idly by”. It threatened to attack if Israeli police did not retreat from the compound by 6pm.

Days of international condemnation and pleas for a placatory approach from senior Israeli figures – including former prime minister Ehud Olmert, who warned that “a kind of intifada is brewing” – appeared only to have strengthened the resolve of the authorities to deal with the Palestinians by using overwhelming force. 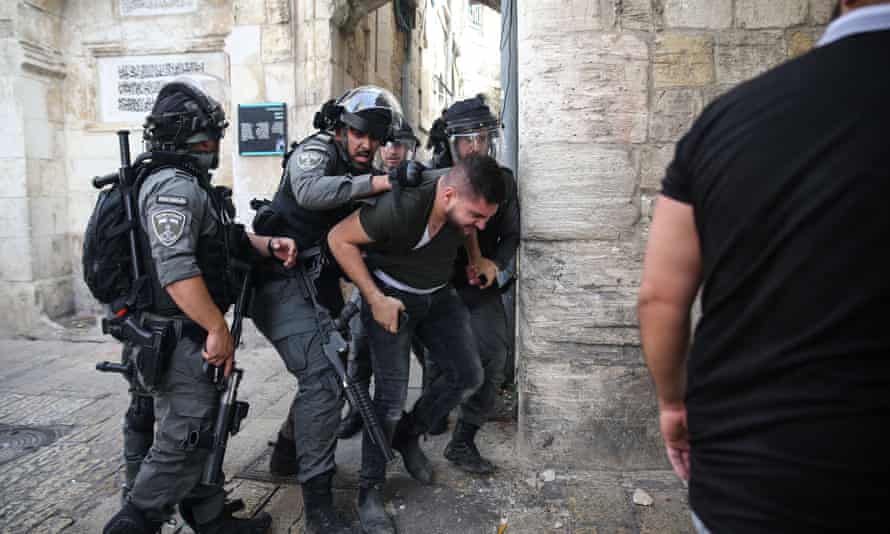 The chief of police had said his officers would face the disturbances with “zero tolerance”. On Monday, a defiant prime minister, Benjamin Netanyahu, said officers were involved in a “just struggle”. Meanwhile, within earshot of stun grenade explosions over a mile away, his ruling Likud party sought to push forward a deeply contentious bill in parliament aimed at cementing Jewish settlers’ control in the Palestinian territories.

Hundreds of Palestinians and dozens of Israeli civilians and police have been wounded in a bout of violence lasting several weeks, the worst since the last significant flare-up in 2017. Responding to the tensions, militants in Gaza have fired rockets, and separate attacks in the occupied West Bank have left a 16-year-old Palestinian and a 19-year-old Israeli dead.

A convergence of factors, all of them related to Israel’s half-century occupation and military grip over Palestinian life, have come together at once. Palestinians have complained of what they say are unnecessarily severe restrictions on nightly gatherings during the Muslim holy month of Ramadan. And last month, far-right Israeli groups chanting “Death to Arabs” faced off with Palestinians in Jerusalem.

Meanwhile, an Israeli court ruling on whether authorities would evict dozens of Palestinians from an East Jerusalem neighbourhood and give their homes to Jewish settlers was due on Monday. The supreme court delayed that at the last minute, but the city was already seething.

Then came Monday’s annual Jerusalem Day parade, at which flag-waving nationalists march through the Old City, the centre of a decades-old crisis. Previous events have seen participants angrily bang on shuttered doors as they descend through the Muslim quarter.

Jerusalem Day is a celebration of Israel’s capture of the entire city in 1967, including Arab neighbourhoods and the al-Aqsa site. To many Jews, that compound is the Temple Mount, the holiest site in Judaism, and it is a deeply-symbolic place for many Israelis. 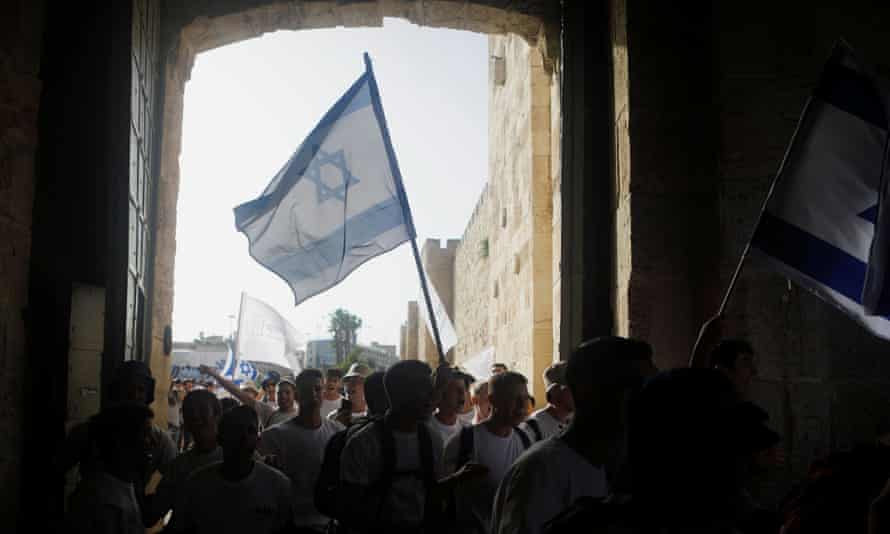 Tomer Gartzman, a 27-year-old student and Israeli settler, said he had come to the march to celebrate a “united” Jerusalem. He stood outside the Old City with friends from a far-right movement called Zehut, or “Identity”. They handed out leaflets that called for Israel to “encourage the emigrations of Arabs”, while also granting citizenship “to the very few who vow loyalty to the state”.

Asked about the recent violence, he said the government and police should crack down on Arabs even more. “They should use what you might call ‘excessive force’,” he said. Later, he added: “The problem here cannot be solved by diplomatic tools.”

Fearing a showdown, police rerouted Monday’s march away from majority Palestinian neighbourhoods. But by that point it was too late. Minutes after 6pm, air raid sirens were heard across Jerusalem as militants in Gaza launched a rare volley of rockets at the city. A night of more missiles, and Israeli retaliatory airstrikes, looked inevitable.

At the march in Jerusalem, men, women and children, dressed in the blue and white colours of the Israeli flag, briefly dispersed as the sirens sounded to shelter by walls. But once they heard the distant booms, they returned to the open streets.