At noon on 20 January 2021, the tumultuous and divisive Trump term ended and Joe Biden, the former VP and longtime senator with working-class Scranton roots, became the 46th president of the United States.

The swearing-in ceremony on Wednesday was a stark reminder of the uphill challenges that the new president faces in office.

Washington DC is surrounded by a ring of steel and troops reminiscent of a war zone following an insurrectionist siege at the US Capitol by a pro-Trump mob earlier this month. And the capital, normally dotted with jubilant scenes on such a historic occasion, is strangely empty due to pandemic precautions.

Here, The Independent, takes a look at the defining images on the day the Biden era began. 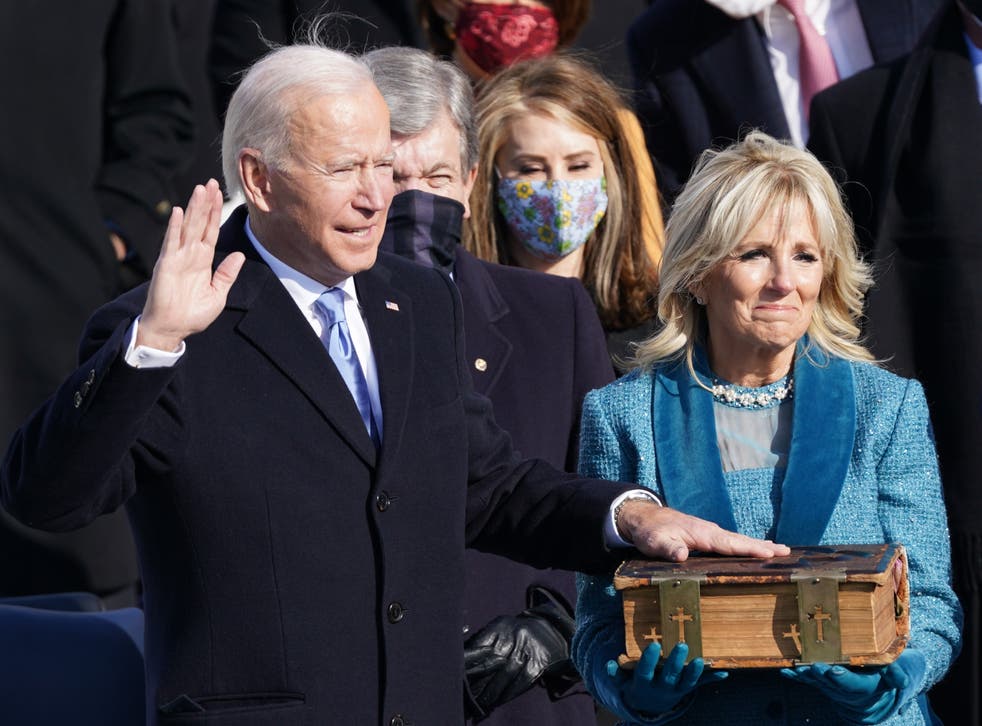 Joe Biden was sworn in as the 46th President of the United States on the West Front of the Capitol while his wife Jill Biden held a bible. The president welcomed a ‘day of history and hope’ after taking the oath of office saying: ‘This is America’s day. This is democracy’s day.’

Kamala Harris was sworn in as Vice President while her husband Doug Emhoff held a bible, marking a historic moment for the United States as she became the first Black vice president, first woman, and first South-Asian to be elected to the role. Mr Emhoff also made history as the first-ever First Gentleman

The ‘Field of Flags’ on the National Mall in front of the Capitol building, representing those not able to attend the celebrations due to the Covid-19 pandemic

Donald Trump and Melania Trump at Joint Base Andrews in Maryland before heading to their Mar-a-Lago club in Palm Beach, Florida. Mr Trump is the first president in 152 years to refuse to attend the inauguration of their successor

Ronald Koeman: Messi scored 18 goals, all the other attacking players scored the same number. He also needs help
President of Atalanta on the refereeing of the match with Real Madrid: It was a shock. The referee is either inadequate, not ready for the Champions League match, or psychologically dependent
Otamendi on Guardiola: A monster. There is nothing better than working with such a coach
Henderson is out until at least April after surgery due to a groin injury
Barca presidential candidate Font on Laporte: The impression that the king is naked, and no one dares to say it
Manchester United still have an Interest in Kunde, but do not want to pay 80 million euros in compensation for the defender of Sevilla
In 2013, the former players of the Russian national team invested more than 200 million rubles in the bank. The money is still not returned
Source https://www.independent.co.uk/news/world/americas/us-politics/inauguration-day-2021-biden-harris-trump-b1790041.html

A beginner’s guide to cycling indoors: From turbo trainers to kit and hardware

Grants of up to £5,000 for community groups in Bradford District