HOLLY Willoughby has shared the impressive snowman her children built while she was at the premiere of Dancing On Ice.

The mum of three shared a snap of herself kissing the snowman, and revealed the canny kids had used Jaffa cake biscuits for coat buttons.

Holly captioned the post: "Can’t take any credit for this guy... all the kids handy work whilst I was at @dancingonice ... and yes... those are Jaffa cake buttons."

The smiling snowman had also been adorned with a flat cap, and a red and white stripe scarf.

Britain was blasted by up to 4in of snow as temperatures plunged to -8C in the wake of Storm Christoph.

Show bosses have a purpose-built rink at the former RAF Bovingdon base in Hertfortshire for the new series of Dancing On Ice, but the studio was almost snowed in due to the weather.

Emmerdale's Joe-Warren Plant and his partner Vanessa Bauer filmed themselves having a snowball fight outside their dressing room.

Rebekah Vardy was also seen sticking her head out of her dressing room at the site, where the celebrities are put up in portable units.

Myleene Klass was the first celebrity skater to be booted off this year’s show, after the classical musician found herself in the skate off following a shaky first performance with partner Lukasz Różycki. 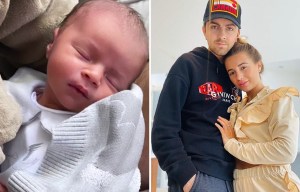 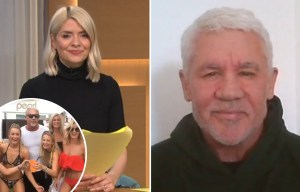 Holly Willoughby asks Wayne Lineker, 58 'why not date women your own age?' 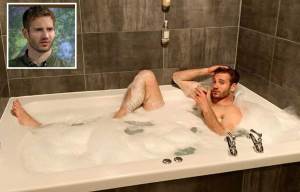 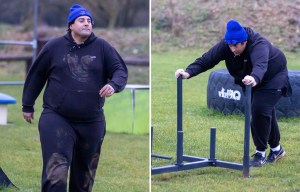 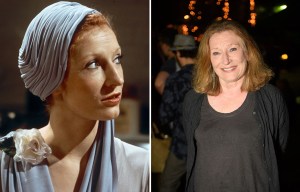 Charlotte Cornwell has died at 71 after a battle with cancer 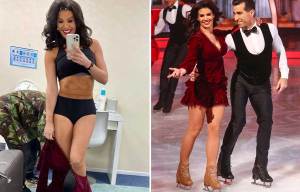 Then, after going head-to-head with rapper Lady Leshurr and Brendyn Hatfield, all four judges voted for Myleene to be eliminated.

Disappointed but putting on a brave face, Myleene told hosts Phillip Schofield and Holly: "I couldn't have done it without Lukasz, my family and my friends.

"But I've learned a new skill in lockdown. Who'd have thought it? When the rinks open, I'll be there!"

Capital Radio DJ Sonny Jay and Angela Egan were awarded the Golden Ticket, meaning they glided straight through to next week's Musicals show.

Dancing on Ice shock as Myleene Klass is eliminated first

President of Atalanta on the refereeing of the match with Real Madrid: It was a shock. The referee is either inadequate, not ready for the Champions League match, or psychologically dependent
Otamendi on Guardiola: A monster. There is nothing better than working with such a coach
Henderson is out until at least April after surgery due to a groin injury
Barca presidential candidate Font on Laporte: The impression that the king is naked, and no one dares to say it
Manchester United still have an Interest in Kunde, but do not want to pay 80 million euros in compensation for the defender of Sevilla
In 2013, the former players of the Russian national team invested more than 200 million rubles in the bank. The money is still not returned
Lucescu about Dynamo Kyiv in the 1/8 finals of the Europa League: If they had said this in the summer, no one would have believed it
Source https://www.thesun.co.uk/tvandshowbiz/13847566/holly-willoughby-huge-snowman/