The NHS charity veteran raised nearly £33million for a sponsored walk of 100 lengths of his garden. Captain Tom's funeral will be honoured by the RAF Battle of Britain memorial flight. A Second World War-era C-47 Dakota aircraft will fly over the private service at Bedford Crematorium today. 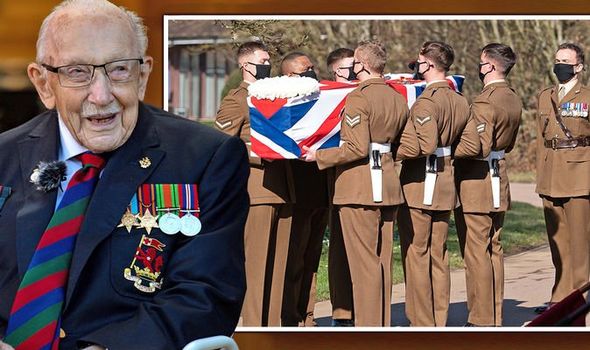 Current members of the Armed Forces will attend the funeral for the former member of the Duke of Wellington’s Regiment.

The veteran was part of the Yorkshire Regiment during the Second World War.

The soldiers will carry his coffin to Bedford Crematorium.

An additional, fourteen soldiers from the Yorkshire Regiment will then form a firing party.

Each soldier will fire three rifle rounds in unison for the deceased war veteran.