Liverpool kept alive their dreams of qualifying for the Champions League in remarkable circumstances as goalkeeper Alisson scored a 95th-minute winner at West Bromwich Albion.

The emotional Brazilian, who lost his father in a drowning accident in February, dedicated the first goal of his senior career – a fine, glancing header – to his family as he said: “God put his hand on my head today”.

Jürgen Klopp claimed a partial assist for “the technically insane” goal that came after Mohamed Salah, moving level on 22 goals with Harry Kane in the chase for the Premier League’s golden boot, had cancelled out Hal Robson Kanu’s opener for West Brom. “I saw Ali starting to go forward,” said Liverpool’s manager. “My part in the goal is that I didn’t shout for him to stay back!”

“We are really close so I know exactly what it means to him [Alisson] and what he thought in that moment, it’s touching,” Klopp added. “It’s only football but it means the world to us. Now we need to keep going and make sure we are ready for Burnley.”

The entire Liverpool team huddled around Alisson after the 28-year-old rushed upfield to glance Trent Alexander-Arnold’s inswinging corner into the far top corner.

Klopp said: “The way his teammates [celebrated] showed today how much they care for him. He’s a wonderful, wonderful person: funny, smart, thoughtful, intense in moments. He’s just a great guy. [After all he’s been through] a special moment like that couldn’t have happened to a better person.” 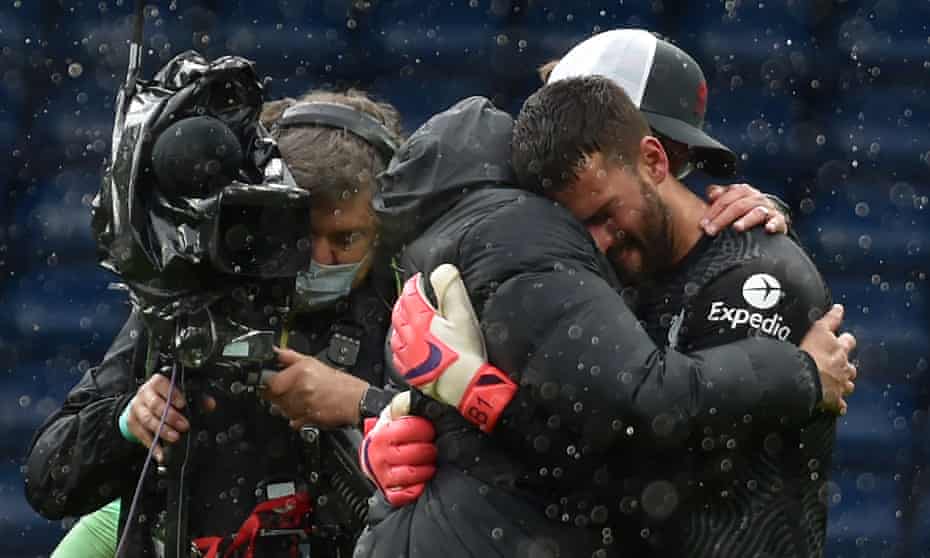 Liverpool travel to Burnley on Wednesday before hosting Crystal Palace on Sunday. Just three points separate the three teams contending for the final two Champions League places, with Chelsea and Leicester, fresh from Saturday’s FA Cup final, meeting on Tuesday. It could yet come down to goal difference.

Alisson spoke of the importance of qualifying for the Champions League even as he reflected on what he has been through this spring when Klopp withdrew him from the team after his bereavement.

“I’m too emotional, with everything that’s happened in my life recently with my family: football is my life, from since I remember with my father. I hope he was there watching and celebrating,” said Alisson. “Sometimes we [Liverpool] have been doing things and it’s not been working. The Champions League is so important to us and I’m so happy I am able to help.

“I looked over the bench, didn’t get anything, then John [Achterberg, goalkeeping coach] shouted with conviction to head up.

“I think it is the best goal I have ever scored.

“ You can’t explain a lot of things in life. The only answer for me is God; he put his hand on my head today and allowed this to happen. It’s emotional for me, I’ve received incredible support recently [from the footballing fraternity]. I can’t thank you all enough for the support.”

Love, Victor cast – Who stars in the Hulu show?

Why Shaw starts and Walker dropped from England squad vs Scotland

Housing developer says felling of protected tree was 'a mistake'

Manhunt in Coos Bay, Oregon, as cops search for driver who ‘left two dead in hit-and-run and shooting’

Who is Peter Crouch’s wife Abbey Clancy and what is her net worth?

Kendal fans give their predictions on England vs Scotland