Girl, 7, dies and brother, 4, missing after being swept from father’s arms by ferocious tide on Oregon coast

A SEVEN-year-old girl has died and her four-year-old brother is still missing after a giant wave swept them from their father's arms and into the ocean.

Jeremy Stiles, 47, was reportedly on shore holding his children when they were caught in rough waters that combined with a high tide.

Known as a king tide, the surge then swept Stiles and the children, who have not been named publicly, out into the ocean.

The children's mother called 911, and when police arrived, they reportedly saw Stiles struggling to get out of the ocean, while his daughter was seen further out.

Oregon State Police said that a Manzanita Police Department officer was able to retrieve the girl and bring her to shore south fo Arch Cape.

According to reports, both the Stiles, of Portland, and his daughter were unconscious at the scene.

They were then transported by ambulance to Providence Seaside Hospital.

The search for the unnamed boy captured by KPTV and carried out by helicopters, as the United States Coast Guard declared it was too difficult for the search to be carried out by boats.

By sunset, the boy had not been found and rescuers suspended their search.

"We’re obviously hoping for the best, but at this point it’s very challenging."

The girl was pronounced dead at Providence Seaside Hospital, according to police.

Local reports claim Stiles remained in hospital on Sunday but is expected to survive.

Videos had captured hundreds of people visiting Cannon Beach on Saturday, as well the giant waves and reported swells of 35 feet in the area.

Authorities have advised locals to stay away from jetties, logs and rocks on the beach.

Manzanita Police Department asked for no media interviews to be carried out on Sunday. 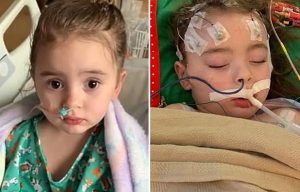 ROBBED OF HER SIGHT

Unvaccinated girl, 4, goes blind after nearly dying from the flu 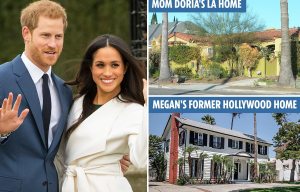 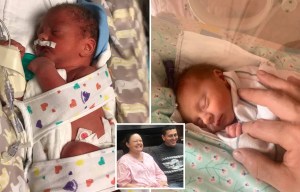 Twins born in different DECADES - and their parents are left ‘speechless’ 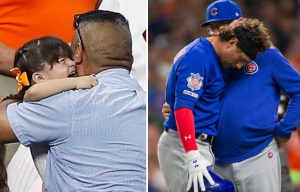 Girl, 2, left with permanent brain damage after being hit by Cubs foul ball 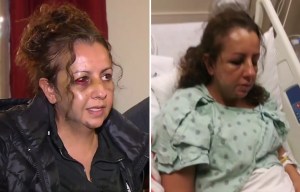 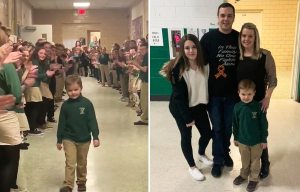 Boy, 6, gets standing ovation from classmates after beating leukemia

The rough waters developed over a weekend when the US was being battered by storms.

Across the country, 10 people died from storms over the weekend, as flooding remains a big concern.

There were also numerous reports of downed trees and power outages, as well as 100-mph winds in some places.

Coronavirus warning as patients dying now were infected a month ago

Every confirmed coronavirus case in Yorkshire

Boris Johnson's message to the public as he battles coronavirus