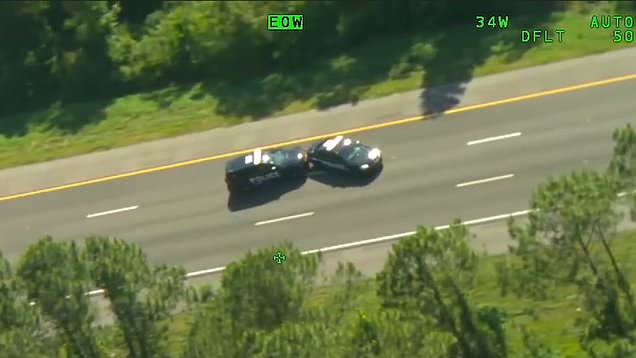 A man stopped after stealing a police car managed to get away a second time – by stealing another one.

The 33-year-old’s first getaway came after officers in Volusia County, Florida, stopped to speak with him after reports he had been wandering in and out of traffic. He jumped behind the wheel of their marked SUV and sped up I-95 before being forced off the road and crashing into woods.

But as officers advanced on the squad car with their guns drawn the man burst out from between the trees behind them and leapt in one of the empty squad cars which still had the keys in the ignition.

As the cops quickly scrambled back to their own cars and the pursuit resumed one officer warned over the radio: ‘Any other vehicle dealing with him, lock your doors.’

The highway was closed to all other traffic, leaving motorists queuing on entry ramps while a helicopter was drafted in to help with the chase, according to The Daytona Beach News-Journal.

Officers eventually managed to halt the runaway squad car using stop sticks to puncture the tyres and the man was safely taken into custody on Thursday afternoon.

Volusia County Sheriff Mike Chitwood told the News-Journal he was proud of the way his officers finally brought the situation under control, despite the initial blunders.

He said: ‘We are going to get criticised “How could this happen” or whatever.

‘You know, that’s a fair criticism. By the same token, people have to look and say you know what they didn’t shoot and kill him – no one got hurt.’