Flash flooding hit the capital a little over a week ago submerging roads and sparking major transport delays. The London Fire Brigade was dispatched to hundreds of callouts due to the severe weather with several London Underground stations heavily flooded. But now new weather and flood warnings have been issued across the country - but are you affected?

The Met Office has issued a yellow weather warning for thunderstorms across a large swath of Wales and England.

The warning advises of heavy rainfall, torrential downpours and thunderstorms which could result in travel disruption and some flooding.

There is a small chance homes and businesses in the affected area could be flooded quickly with some damage to buildings possible as a result of floodwater, lightning strikes, hail or strong winds.

Where flooding hits, delays to trains and buses are possible according to the forecaster. 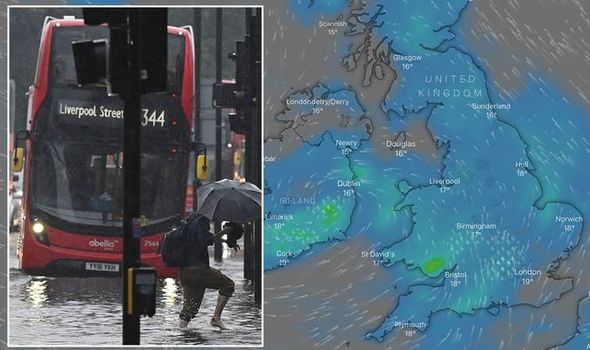 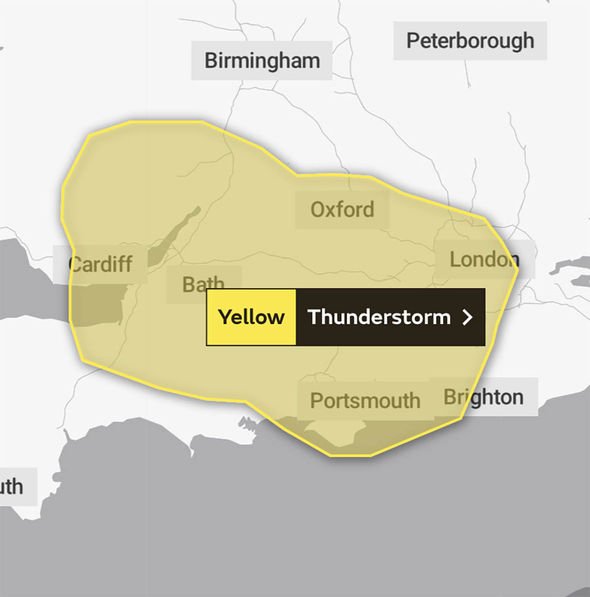 Spray and sudden flooding in the impacted regions could lead to difficult driving conditions and some road closures.

There is also a slight chance power cuts could happen.

The advisory is in effect from 9.42am until 11pm and covers several areas across the southeast.

The warning reads: “Heavy showers already affecting the south and east of the Isle of Wight will become more widespread across the warning area through the afternoon, with some thunderstorms also developing.

“These may be quite slow-moving and last for an hour or two.

“Some torrential downpours are possible with a few places seeing two inches (50mm) of rain or more within a few hours. 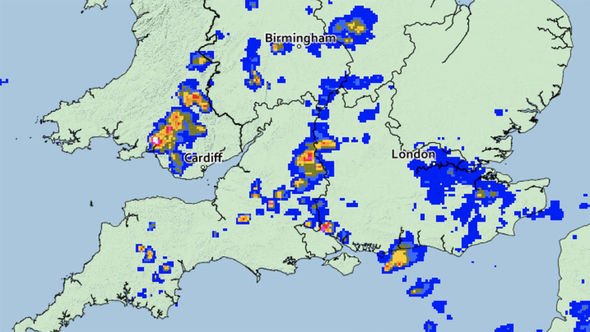 The Environment Agency has one flood warning in effect in England as of Monday at 3.40pm.

The flood warning has been implemented as flooding is expected and immediate action required.

The warning is in force at Monktonmead Brook at St Johns.

The Environment Agency has advised the water level in the Monktonmead Brook continues to rise with 1.3 inches (32mm) of rain recorded in just two hours at Ryde early this morning, which is over a month’s worth.

St John's Station water could flow from the railway tracks into the main buildings at the station depot and it could also flood outbuildings, the plant and vehicles near Park and Rink Road.

Heavy showers may continue to affect the area today and rain water levels may not fall until at least midday with flood impacts continuing until then.

Flood water across the railway tracks and in buildings could be very deep. 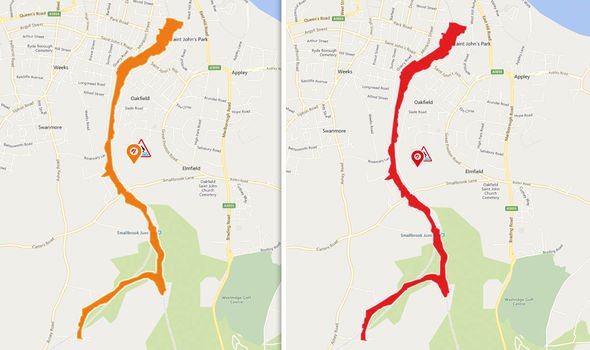 There is also one flood alert in effect where flooding is possible and preparedness is advised.

The Environment Agency’s flood alert is in effect at St Johns, Ryde.

Intense rain in the region has fallen, but given the high level recorded in the early morning preparedness is advised.

Property flooding is not currently expected at this time but the organisation is due to keep this under review.

Further thundery showers are possible this morning and over the next 24 hours and water levels are due to remain very high until midday.

More rain forecasts have been issued for later this week which means the wet weather and possible flooding could be far from over.

The Met Office predicts sunny spells for most areas on Tuesday, but with scattered showers breaking out in the afternoon.

The rain will be heavy at times and mainly impact the northwest, southern and central England.

Some areas of the country will however remain dry all day.

The rest of the week is likely to be as mixed with periods of dry weather interspersed with showers or longer spells of rain each day.

The showers will be occasionally heavy and thundery, with some accompanied by hail.

Winds will be mainly light during this period and weather will feel around normal for this time of year.

The changing between sunny spells and showers will continue through the weekend with unsettled, changeable conditions due to dominate into next week.

Clattenburg on Chelsea's accusations of racism in 2012: It could have ruined my life. European champions against the referee - who would you believe?
Mbappe's salary at PSG is 12 million euros a year. Messi and Neymar have 30 million each (L'Équipe)
Hudson-Odoi may refuse to play for England and choose Ghana. He was disappointed in the FA because of the lack of chances in the main team
Barcelona wants to sign Sterling in the winter. The player is Interested in the transition
Larsson denied the conflict with Vitoria: There are no problems and there have never been any. The strength of Spartacus is in unity
The DFB allowed Kuntz to negotiate with the Turkish national team
Kante is ready to play with Tottenham, Pulisic is training individually