The first thing we see in The Man Who Sold His Skin is human hide: flayed, framed and transformed into an artwork. Gloved hands present the canvas of painted skin at auction in all its gruesome glory. It belongs to Sam Ali, a Syrian refugee and fugitive who agrees to have his back tattooed by a conceptual artist in a Faustian exchange for a European visa that turns him into a human artwork, exhibited on gallery plinths and gawped at by the world.

“That was actually a replica of my skin in the opening scene,” says Yahya Mahayni, the Syria-born actor who plays Sam. “They made a mould of my back with all its imperfections and then put it on pigskin because that looks like human skin.”

Written and directed by Kaouther Ben Hania, it had a triumphant premiere in Venice in 2020 and was nominated for a best international feature Oscar earlier this year. “It was a very emotional moment for me and for Yahya,” says Liane. “One of the most emotional moments of my life.” 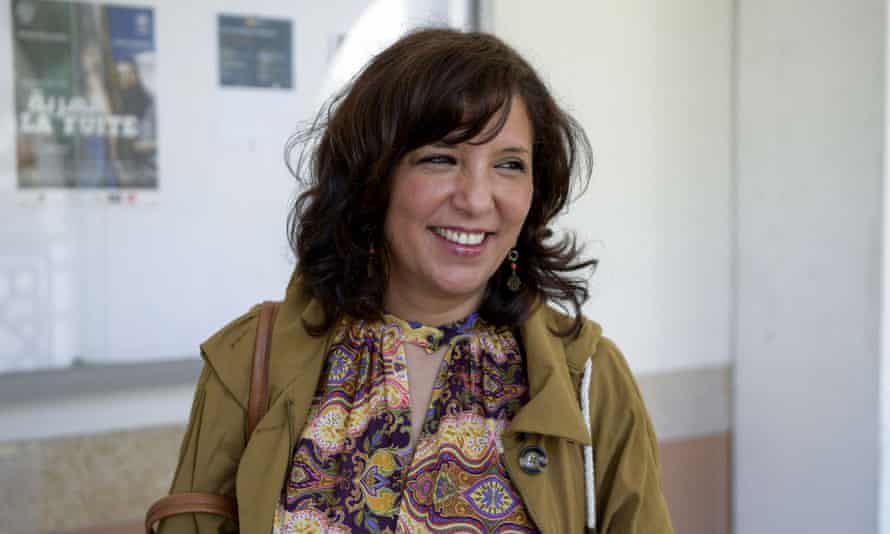 As outlandish as the film’s central conceit may sound, it was inspired by real-life exhibit Tim Steiner, whose back was painted by the Belgian artist, Wim Delvoye, and shown at the Louvre in 2012. But where there are parallels between Delvoye’s Tim and the film’s Sam, the two “artworks” are not ethical equivalents. “Steiner freely agreed to his contract with Delvoye and is happy to sit in a museum to this day,” says Mahayni, “but Sam agreed to his contract under duress of circumstances.”

Yet his character also refuses to see himself as a victim and rejects the help of those who want to save him from being objectified. “Yes,” says Mahayni. “Kaouther was tired of seeing films portraying refugees as victims. She wanted Sam to be a hero and in the process of becoming a sort of hero he does question the judiciousness of his decision.”

Mahayni’s intense performance won him two awards at Venice; no mean feat for an actor in his first ever film role. How did he come to play Sam? Ben Hania wanted to find Syrian actors to play the leads, he explains, and had been searching across continents. A casting director gave her photos of Mahayni from a few years earlier, although he had just decided to give up on acting at that point. Now 37, he retrained as an actor seven years ago after a first, dynamic, career as a lawyer with special expertise in international arbitration (he has a degree from Dundee University, a master’s from the Sorbonne and still teaches at Queen Mary University of London). Several years on from retraining, he was finding it impossible to live on the money he was making at the bottom rung of acting, until Ben Hania came along.

It was Liane’s first film role, too, having worked solely on stage in France. She, too, was born in Syria but her family left Damascus when she was two and she grew up in Lebanon and Paris. She decided to return to Syria in 2018 after being cast in the role. “I feel French, culturally, but I wanted to imagine my character as concretely as possible. I stayed in Damascus for two weeks over Christmas and went walking in the neighbourhoods where I could imagine Abeer would walk. As I was wandering around I saw a girl crossing the street who looked exactly as Abeer would.” 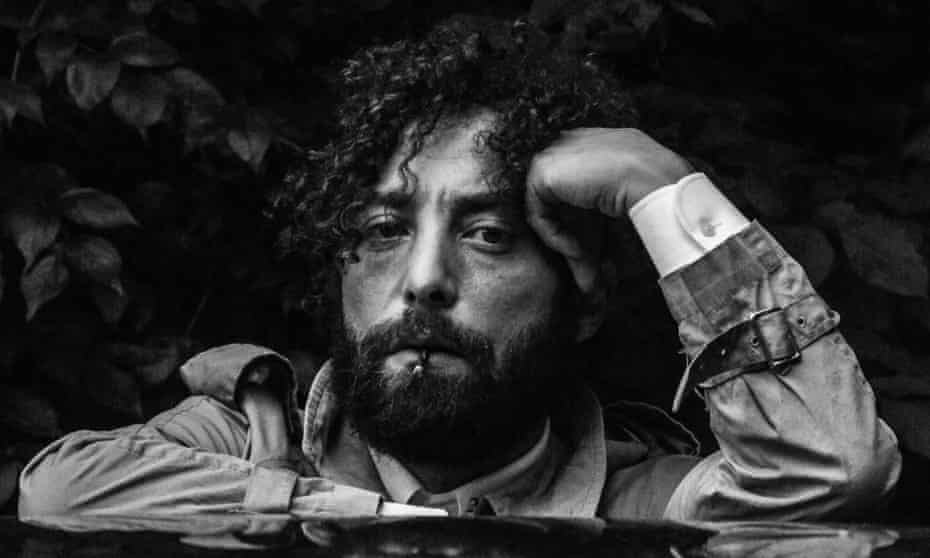 Liane speaks French and Arabic in the film and she didn’t want her accent to give her away either so she worked on ironing out any French inflections. “At first the pronunciation was a kind of musical training for me but it dug up emotions that were connected to the language.” She also felt her trip to Damascus was vital in reminding her of the cultural confines that Abeer faces in the film. As a woman born into an upper-class family, the prospect of marrying a man like Sam – from a class well beneath her own – carries a big social stigma. “When I read the script I thought: ‘I wouldn’t make the same choices as Abeer’ because I was seeing things in a western way. But when I went back it became very clear that a girl can’t do that, not only in my own family, which is Christian, but more widely in Syrian society. It’s a big cultural taboo.”

What was it like to act alongside the likes of Monica Bellucci? “Oh, it was surreal,” says Mahayni, “but then you get used to it because she gets into the role quite quickly so, ultimately, you’re speaking to her character. It was more intimidating to work with De Bouw and [the Lebanese actor] Darina Al Joundi, who plays my mother and is a stunning performer. It became a good opportunity to learn from them.”

The film begins with the eruption of the Arab spring and Syrian civil war in 2011 but Mahayni’s family left Syria for Canada when he was three, long before conflict broke out: “One of the reasons I felt as if I had no legitimacy to play this role was because I haven’t lived through anything that compares.”

Still, he was 27 and living in London when he witnessed the country’s unravelling: “Any conflict polarises people and reduces nuance. You can see everyone wants peace and prosperity but it’s just become so divided. I got so exhausted of watching it on the news that I stopped. I find it to be almost too painful and disheartening.”

Liane had followed the war on the news too and felt increasingly helpless over the years. Playing Abeer brought catharsis: “I’ve always felt weird about being in France, knowing what my country of origin is going through. I’ve felt powerless in the face of it so being part of this movie really helped me – I was glad to contribute and express something about it.”

Mahayni, meanwhile, admits to struggling with playing Sam at first. He is a bold, determined character, he thinks, but also pouty and immature, faking a suicide bombing inside an auction house, purely for his own amusement. “I found some of his actions selfish,” says Mahayni, so on Ben Hania’s suggestion, he began watching masterclasses by the likes of Samuel L Jackson and Natalie Portman in the hope of identifying more closely with the role. “One very useful thing that Jackson says is that you can’t judge your character so I really tried to empathise with what Sam was going through but I still don’t like him, to some extent. I admire his love, his determination, but sometimes he’s just a bit annoying.” 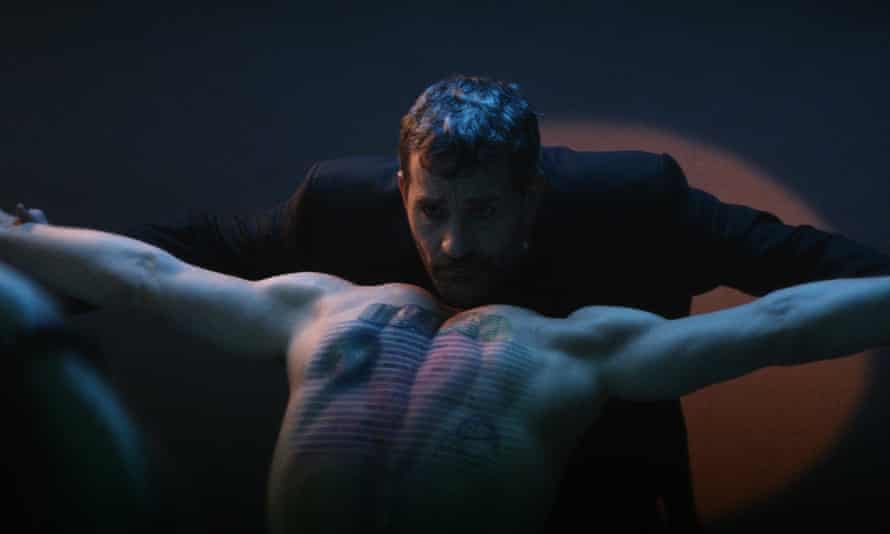 The Man Who Sold His Skin. Photograph: PR

Ultimately, thinks Mahayni, this is a film not about refugees but “inequality which is insurmountable as a result of when you’re born, where you’re born, what family you’re born into, what passport you hold. Kaouther was pointing out the incongruity in declaring that equality and dignity for human beings is universal on the one hand, and on the other hand suggesting that we as human beings place more importance on money than life.”

Which brings us to the film’s indictment of the art world – its venalities and hypocrisies which turn Sam into a commodity even under the guise of critiquing the way society dehumanises refugees. Sam is unreservedly contemptuous of the world in which he finds himself, even if he is forced into complicity. What is Mahayni’s view of contemporary art? “I remember when I was in London and I went to the Tate to see an exhibition by Joan Miró. There was a large white canvas with just a line across it and I was like: ‘Wow, this is so … insignificant and meaningless.” An actor after his character’s heart, after all.

The Man Who Sold His Skin is in cinemas on Friday.

JinnKid arrested – Inside deadly side of TikTok where stars ‘murder, die smuggling illegal immigrants, & get shot’

Disney has MASSIVE discounts on large soft toys with £25 off

Isis in Afghanistan could have the capability of attacking US in six months, intel finds

How long does the budget speech last and what time is it announced?

The kebab house named best in Wales for the second time

Sunak prepares to deliver Budget for a ‘new economy’

Man, 70, dies after reports of fight at Yacht Club

WhatsApp: The truth about claims app will stop working on iPhones and Android

The biggest problems with the £37bn NHS Test and Trace system

Four charged in connection with 'disturbance' on Fife street

Belgium warns Poland "not to play with fire" over EU dispute

Civil rights pioneer, 82, tries to get her 1955 record for refusing to give up her seat on a bus expunged

COP26: Here's what delegates will be eating as pioneering low carbon menu of Scottish food revealed

I’m a mum-of-23 including seven ‘angel babies’ – I’ll never forget the ones I lost, my kids talk about them all the time

Wetherspoons is bringing back 99p pints just in time for winter