Fine Gael tweeted saying: "Ireland has overtaken the UK in fully vaccinating our adult population against COVID-19." It included a table comparing the UK's rate of 72.1 percent and Ireland's 72.4 percent. But the message from Leo Varadkar's party has faced a huge backlash, with some taking to the social media platform accusing the political party of "gloating" over a sensitive issue. Many critics also branded it "deeply inappropriate" and "in very bad taste".

Fine Gael, led by Ireland's Deputy Prime Minister, was quickly urged to delete the tweet as a mark of respect for Covid victims.

Many highlighted how it has taken Ireland much longer to vaccinate its entire adult population against Covid when the country has a much smaller population.

Reacting to our initial story, one Express.co.uk reader raged: "The sad thing is that Ireland cannot understand why it is that everybody is laughing at them over this. 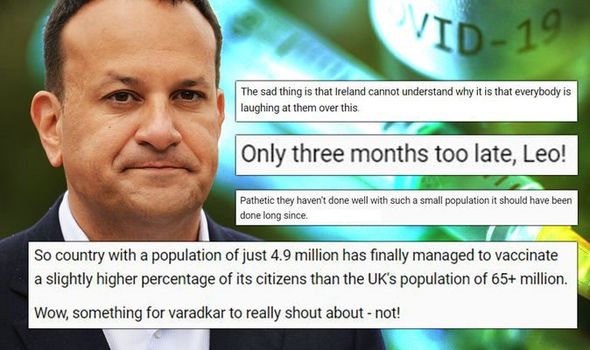 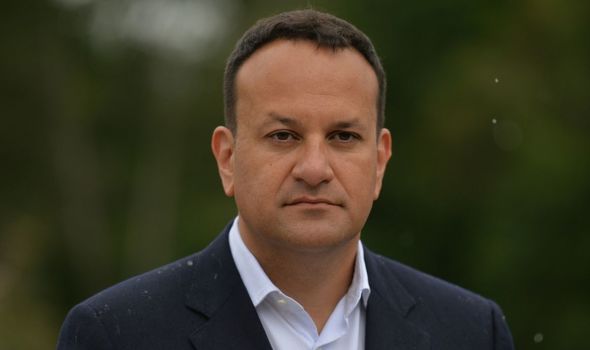 A second person said: "So a country with a population of just 4.9 million has finally managed to vaccinate a slightly higher percentage of its citizens than the UK's population of 65+ million.

"Wow, something for Varadkar to really shout about - not!"

Another reader fumed: "Pathetic they haven’t done well with such a small population. It should have been done long since." 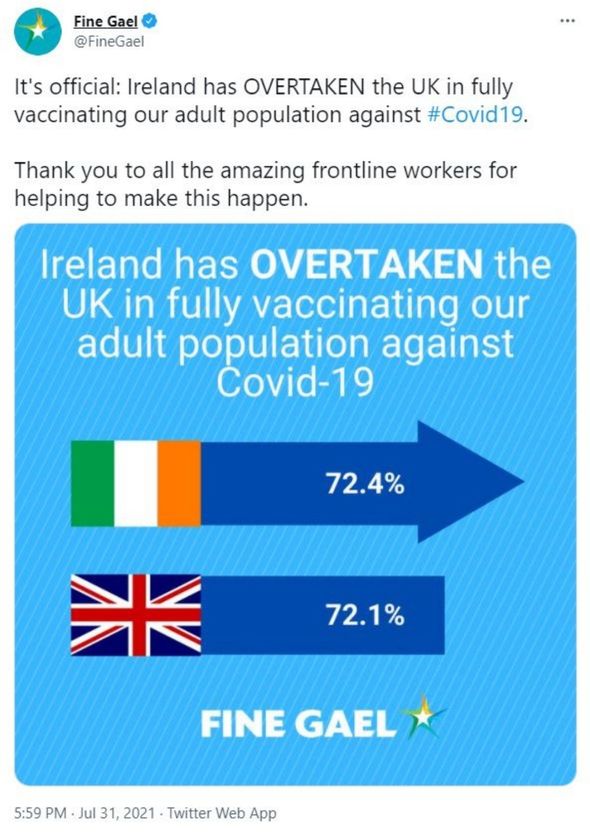 A fourth person added: "Only three months too late, Leo!"

On Saturday, Ireland's Prime Minister Micheal Martin hailed his country's "brilliant" vaccine rollout after it overtook that of the UK.

The Taoiseach praised those involved in the programme after the latest official figures revealed more than 5.8 million vaccine jabs have been administered.

He wrote on Twitter: "The vaccine rollout is continuing at great pace. 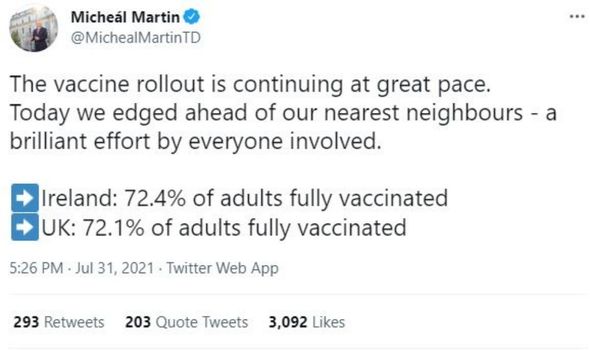 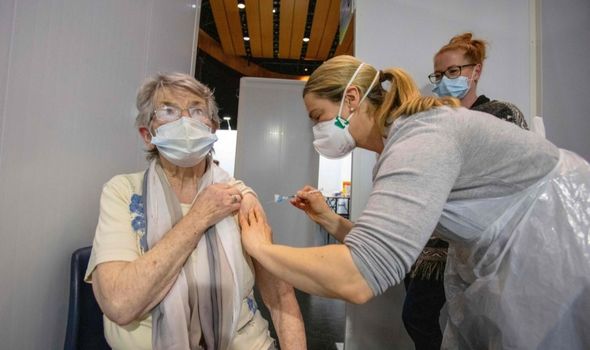 "Today we edged ahead of our nearest neighbours - a brilliant effort by everyone involved."

Fianna Fail leader Mr Martin was told his tweet was "distasteful" and an "immature swipe" at Britain, particularly considering the number of dual nationals living on either side of the water.

The latest progress with vaccinations has marked a significant turnaround for Ireland, which experienced early setbacks in the inoculation process because of supply issues with AstraZeneca that had dealt a huge blow to the European Union.

There had even been speculation the UK could donate surplus vaccines to Ireland later this year to help it address the shortfall in jabs.

But over recent weeks, Ireland has seen its vaccine programme accelerate in a significant way.

Ireland has set up ew walk-in vaccine centres which are attracting large crowds and on Saturday, long queues were seen at many venues.

Ibrahimovic will not play with Atletico. He can return to the ranks after a pause for national team matches
Mbappe complains about Neymar, and Donnarumme feels bad behind Navas (but Messi is for him). Against this background, PSG has 8 out of 8 in the league
Arsenal demolished Tottenham for the first half of the derby. A hole in the support zone and a completely unprepared Kane helped
Kroos on the injury: I played with the pain for six months, taking pills. Between matches, the pain was much stronger
Damsgaard is Interesting for Juve, Inter, Milan and Tottenham. He scored against Russia and England at the Euro
Niko Kovac: This is exactly what I want to see-the substitutes come out and decide the outcome of the match
Spalletti on the leadership of Napoli: Expectations from us have increased, but there is something to add

A year on from the Second Karabakh War, Armenians are uncertain of the future

Everton tried to sign the 'best player' in Portugal this summer

Nurse suspended after telling woman to ‘get your t**s out’

What Android version do I have? How to check as Google apps set to be blocked for millions

Arsenal fans ask ‘did we win League?’ as they light flares and party outside Emirates after derby day win over Tottenham