Hello and welcome to the Liverpool ECHO's Saturday live blog for all your very latest Everton news, rumours and transfer gossip.

The ECHO will provide breaking stories, reaction and comment to all the big talking points from Goodison Park - as well as keeping tabs on transfer market gossip from around the world.

There will be reaction to the win over Crystal Palace on Saturday as well as more on talks with Swedish outfit BK Häcken for 16-year-old midfielder Imam Jagne.

Get involved and send your thoughts to @LivEchoEFC.

Sign up for the ECHO's free EFC newsletter here for all the latest transfer updates, as well as breaking news, opinion and much more. It's free and takes just seconds to register

Have your say:EFC transfer survey

Tuttosport cited by SportWitness are now reporting Everton are ‘convinced’ about Arkadiusz Milik, with a potential deal apparently nearing to reality.

It claims the Blues could now be prepared to pay the €25m asking price to take the striker away from the Serie A club as he enters the final year of his contract.

They also claim that a move could allow Moise Kean to return to Juventus.

Gary Neville has been getting theatrical about the handball debate after Everton’s win against Crystal Palace.

Speaking on Sky Sports he explained: “I don’t believe I read the rules the same way as they (referees) do.”

Everton have kicked off in the Women’s FA Cup!

You can watch on the FA Player, Everton’s website and we’ll have all the latest updates here.

Everton’s odds of qualifying for the Champions League this season have been reduced to just 5/1 after their promising start to the new campaign under Carlo Ancelotti.

Before a ball was kicked, Everton’s chances of making the top four were rated at 16/1, but it seems the form of James Rodriguez, Dominic Calvert-Lewin and co has forced a rethink, with the Football Pools having cut their price.

Fellow European spot contenders Manchester United, who were given an extra week off from Premier League action after their Europa League exertions at the end of last season, have three points from their first couple of games.

This is how the National Media reacted to Everton’s latest win over Crystal Palace:

Everton will have to make Arkadiusz Milik their highest earner if they are to sign the Napoli striker, according to latest reports.

The Blues are linked with the Polish forward along with Juventus, AS Roma and Tottenham Hotspur with Gianluca Di Marzio claiming the Premier League sides are at the front of the queue, keen to get a deal done before the transfer deadline.

Milik is apparently keen to secure a move away from Naples after the Serie A side secured a deal for Victor Osimhen, who has become their first choice in attack.

Whether he moves to Everton or Spurs, he could find himself still a deputy to either Dominic Calvert-Lewin or Harry Kane with Napoli said to be demanding around £25 million for the 26 year old.

On top of that, Daily Mail claim the attacker is hoping for a contract worth around £160,000 a week from any side interested in his services.

It’s believed that would make him the highest paid player on the books with the Blues, and so the club may have to reconsider their wage budget if they are to get the deal done. 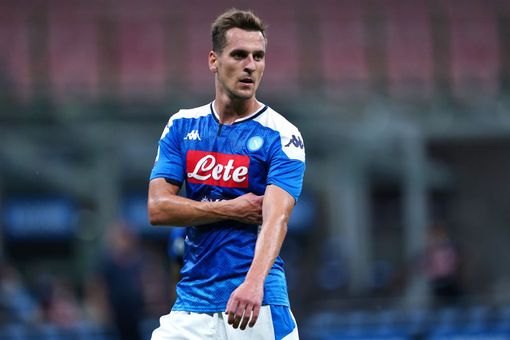 Odds on Everton to win the title

It’s still very early in the season but it seems some fans are checking the odds on Everton to win the Premier League.

The Blues are currently 50/1 for the title according to latest odds on The Pools.

Manchester City are still favourites at 3/4 with defending champions Liverpool priced at 6/4.

Worth a go? Remember Leicester?

The decision to award a penalty against Crystal Palace yesterday has been described as an example of ‘consistent insanity’ by a popular football commentator.

Clive Tyldesley, who provided coverage of the Blues clash at Selhurst Park for Amazon Prime, has posted a video calling for the rules around handball to be looked at.

He’s called on other fans who feel the same to let their feelings known.

Everton’s winner came from the spot after referee Kevin Friend eventually awarded a penalty for handball following a VAR check.

While the decision was technically to the letter of the law, the new ruling has been criticised heavily in the early stages of this campaign.

Roy Hodgson called the decision nonsense and Match of the Day pundit Micah Richards said he was ‘baffled’ by the decision.

Reports in the Sunday People claim West Ham are looking at the Republic of Ireland international to bolster their squad, following a backlash over their own transfer business so far this window.

No potential fee has been cited.

Moyes brought Coleman to Goodison Park for just £60,000 but he will have to fork over a lot more than that to convince his old club to part with the defender.

Ancelotti thinks very highly of Coleman and has described him as one of the best captains he has worked with.

He’s previously said: “I’ve had a lot of captains in my career but how Seamus expresses his love for the shirt is really top. He is a great captain, honestly. I don’t want to forget anyone [I have worked with] but he is up there as a captain with Maldini, John Terry and Sergio Ramos,”

Everton have held talks over the signing of Swedish teenager Imam Jagne.

The 16-year-old midfielder plays for BK Häcken and director of football Marcel Brands has held discussions over his potential transfer.

BK Hacken’s sporting director Sonny Karlsson told the local media recently: “Yes (it should go through), I think so. We have had a good discussion with both him and Everton, but it is not clear yet.”

The ECHO understands that the Blues have yet to make a decision over Jagne but talks have taken place with the Hacken with a three-year contract being touted.

Here’s just a little reminder this Sunday morning on how the Premier League table currently looks ahead of today’s fixtures....

How the PL table looks after Everton's first three games

Only Leicester City have the chance of replacing Everton at the top today, providing they beat Manchester City later this afternoon.

All 4 of Messi's goals this season are scored from penalties. Three for Barcelona, one for Argentina
Greenwood scored for Manchester United in the Champions League at the age of 19 years and 27 days. Only Rooney did it at a younger age
Perez directed Bartomeu. Barcelona has followed Real Madrid in recent years. La Liga President on the European Premier League
Morata scored three times from offside in the Juventus - Barcelona match
Messi has provided 35 assists in the Champions League. Only Ronaldo has more (38) after Lionel's debut in the tournament
Dembele scored in both matches of the Champions League - Juventus and Ferencvaros. In La Liga, he did not score for more than a year
Keane has scored 4 goals in PSG's last 2 games. In 37 games at Everton, he had the same number
Source https://www.liverpoolecho.co.uk/sport/football/football-news/everton-transfer-rumours-milik-song-19004752